The Evolution of Labor in America: A Photographic History 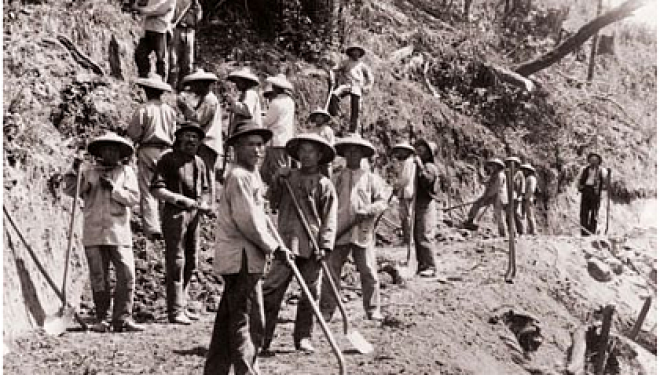 Photos have the unique ability to give us a glimpse into the labor history of the United States.

They can also create a visual timeline of a particular issue or event.

Below are six fascinating photos that offer some perspective on the formation of the U.S. labor force.

The photos also serve as a reminder that many people, from different backgrounds and cultures, contributed to the betterment of America’s labor practices.

In the midst of the Civil War the U.S. Government came up with the lofty plan of building a railroad spanning the country.

But with young men off fighting, the labor pool was sparse. Trying to drum up workers for the new Transcontinental Railroad project, Central Pacific Railroad hired Chinese immigrants who’d come to California to escape the poverty of their native land.

When the project was completed in 1869, eight Chinese laborers were selected to lay the last rail – a testament to the dedication of those Asian-Americans who worked on the Transcontinental Railroad.

Boys and teens employed by coal mines to break the coal into small pieces and remove their impurities became known throughout the U.S. as “Breaker Boys.”

Using kids to break the coal started in the mid-1860s and was prevalent in mining states like Pennsylvania, West Virginia and Kentucky.

Breaker Boys were required to handle the coal without gloves so they could remove the impurities quickly and efficiently. But the lack of gloves and other safety gear resulted in children cutting themselves.

Many children were also injured when their hands and feet accidentally became ensnared in conveyor belts and other heavy coal processing machinery.

Photos of the Breaker Boys by social activist Lewis Hine resulted in a greater awareness of child labor exploitation and the passage of tougher child labor laws in the early 1900s.

In the early-1800s, young, single New England farm girls were recruited to work in the bustling textile factories of Lowell, Massachusetts.

Novel for its time, the Lowell’s factories built boarding houses, cramming 25 girls to a room. The boarding houses also enacted strict codes of moral conduct which included adhering to the Sabbath and attending church.

As conditions deteriorated, the young women began to speak out about their plight. Many were also actively writing labor reform articles to help the public understand their dilemma.

The Lowell Girls’ efforts to improve workplace conditions eventually resulted in the 1845 creation of the Lowell Female Labor Reform Association which pushed for better pay and improved work conditions for women. Owned by businessmen Max Blanck and Isaac Harris, the factory was located on the eighth, ninth and tenth floor’s of Manhattan’s Asch Building.

While many other businesses complied, the prominent New York City blouse manufacturer ignored the demands of their workers and conditions in the factory continued to deteriorate.

While no one knows for certain what caused the fire, it’s suspected that that a tossed cigarette butt had ignited a bin full of fabric cuttings.

What is known is that although there were multiple exits, most had been locked by the factory’s owners to prevent employee theft. The lack of available exits led to workers dying in the building as well as jumping to their deaths.

The Triangle Shirtwaist fire had tremendous implications for American laborers, resulting in New York State enacting some of the toughest labor, building safety and fire code laws in the U.S. The massive shift in U.S. demographics resulted in a “great migration” of families from moving from rural to urban areas. Enticed by greater resources, families were ready to take on factory jobs left vacant during World War I and World War II.

While racial conflicts still occurred the Great Migration created in an industrial boom throughout the North and Midwest and gave greater strength to the Civil Rights Movement.

By 1965 Mexican and Filipino farm workers decided that a fight for minimum wage was long overdue. Their demands for increased pay resulted in an action known as the Delano Grape Strike that lasted five years.

With labor activist Cesar Chavez as one of the most prominent activists at the helm, the strike showed produce growers and consumers that nonviolent action could create positive change.