Untruth #3 – The Chinese are Patent Kings 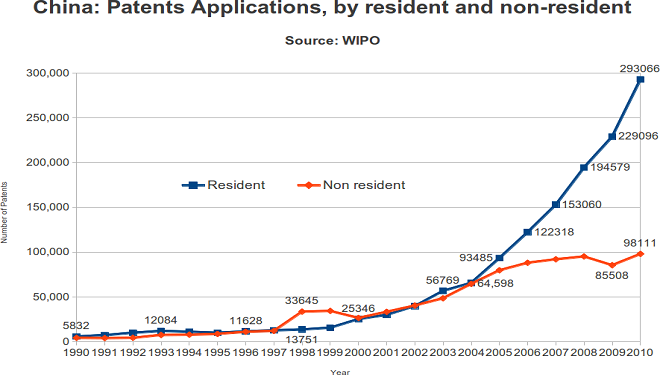 By now you are probably confused after reading Part 2 of this series covering Chinese Innovation, particularly after reading the flurry of comments there.

The throbbing in your head is telling you to stop reading. If all of what I am telling you about China is true, then why haven’t we been told this before?

We have been told, but simply put, the China apologists and companies have bombarded us with a ‘white noise’ of misinformation which has drowned out the truth.

The brutal reality is that quite often that China is a land of smoke and mirrors – a black hole of forced transfer due to a paucity of indigenous innovation coupled with an academic system fraught with fraud, untruths and fabrications which threaten legitimacy of the country.

In addition to allocating funds for research, China has become the world’s leading “importer of R&D” (63), while lagging in “true value creation” (64).

All of this has not equated to widespread breakthroughs in technology, however. Although I am not saying that China cannot innovate, I would claim that more often as not, China’s gains have been expedited by unscrupulous means (65).

As another measure to justify outsourcing skilled and semi-skilled labor, business and apologists alike tout the fact that China is filing more and more patents with each coming year.

These people use patent filings to equate to technological leadership. When one explores the quality of Chinese patents and the ease with which they can be obtained, however, the reality of China’s drive for patent leadership seems quite pedestrian.

“China is developing, just give them time,” some would say.

Pointing at the growing list of patent applications that fly off the shelves of China’s best and brightest (66), it is no wonder that American firms are bailing on us. After all, isn’t China the future? Don’t their students score better in the math and sciences (67)?

Who can blame the widespread flight to China?

Just look at the facts: US applications for patents for new inventions were flat in 2008, while Chinese patent applications increased 18.2% during the same period. (68)” This growth is even more remarkable when we consider that in 1995, China had only 3% as many patents as the US (69). 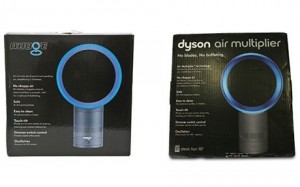 Inventor Sir James Dyson said his company’s Air Multiplier fan patent has been infringed upon over 100 times from copies produced in China.

As a patent holder in China, I am skeptical about the quality of Chinese patents.

It’s as if anyone can get one. Allow me to explain.

A few years ago, an ex-classmate of mine approached me with a great idea.

“Lets start a business in China,” he enthused. Thinking it to be a once in a life time opportunity, I agreed, and several months later we were in business.

One of the most enlightening things we did, however, was to apply for a patent. Although the process of writing our patent proposal was a grueling two hour affair, I truly doubt the specifications behind it would pass international scrutiny.

However, in China it was never a problem. After mobilizing a good friend of mine, who happens to be an attorney, our new found startup was the proud owner of a shiny new Chinese patent.

While I found the entire process to be less than exceptional, it also left me a little cynical (70).

“Just fill out the form and I will make sure you get your patent,” we were told. Within days we had protected our idea via a patent (71), one of the joys of doing business in China.

To me, the ease with which we were granted our patent was beyond belief, an idea shared by others as well (72). Although the process to file was as rigorous as a rousing game of Scrabble, it seemed far too easy. I guess it is no wonder that China’s State Intellectual Property Office (SIPO) received 1.2 million patent applications in 2010, many of which were Chinese “trash” (73) or “utility patents”, like the one I had obtained (74).

The real mystery, however, is “What’s the value of a Chinese patent?” A question many have posed. (75)

What is the True Value of a Chinese Patent?

Thus, valid patents are necessary to protect and foster innovation. (77)

Without getting hung up on the details of patents and trademarks, I feel it at least necessary to distinguish between a US and Chinese patent. An excellent site by Thomas Babel offers a comprehensive guide from which most of the following is derived (78). (disclaimer, the current author is neither an attorney nor is he issuing legal advice).

The US has three patent types (79), as does China. The biggest difference, however is that while both the USA and China have a “utility patent”, China further divides these into “invention” and “utility model” patents.

The remainder of this discussion will focus on China’s ‘utility patents’ or ‘trash patents’ (as they are called) which are not to be confused with US utility patents.

A Chinese utility patent protects, “any ‘new’ technical solution relating to the shape, the structure, or their combination, of a product which is fit for practical use (80).” In China these patents do not undergo a strict amount of scrutiny (81) and as long as the paperwork is filled out correctly, a patent will be awarded (82) – or so it is claimed.

What is more troublesome is that according to an expert at China’s patent authority, patents in China do not need to prove that their intangible assets are new, a marked difference between China and the rest of the world (83).

In addition, China operates under a ‘first-to-file’ system. This means that the first person to file the patent will be granted the technology even if they are not the inventor of the technology.

“First to file” means that if a Chinese person, or anyone else comes across some fine technology that has not been patented in China, then they have the right to “claim” this technology and patent it (84), a thing that a colleague of mine did to the tune of a couple million dollars (85) – but more on that later.

When one thinks of the magnitude of Chinese IPR theft, the enormity of this ‘first to file’ system becomes apocalyptic.

Focusing once again on China’s ubiquitous patent applications, the question becomes, “What is the value of a Chinese patent?”

Based upon my experience, not much. Or let me re-phrase that. Yes, the Chinese are prodigious patenters, but the vast majority of their patents do not demonstrate the capacity to innovate (86). They are merely used as tools to block or lock in innovation from other countries.

According to Cheng Yongshun, the director of the Beijing Intellectual Property Institute, most countries consider innovation patents to be ‘real patents’ (87).

This weekend, as part 2 of dissecting this particular untruth, I’m going to examine the evidence more closely, and show you exactly why China is in fact not the patent king of the world.