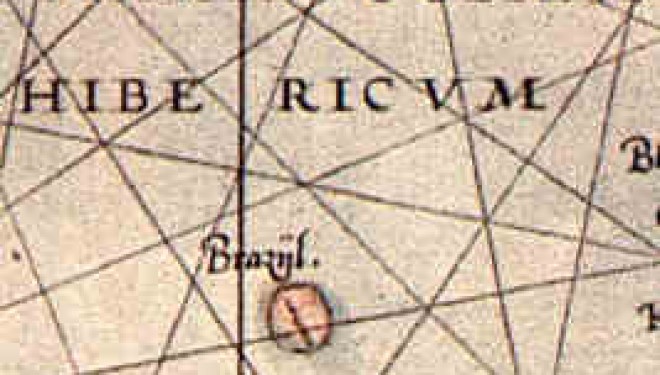 Stories of advanced civilizations, magicians, and Eden-like paradises have been told and re-told by sailors. Some of these sailors claim to have seen and even gone to shore on these magical islands.

However, over time these legends have been proved to be false, or the evidence of their existence is so circumstantial that it is nearly impossible to prove those legends true.

The most famous of these legendary islands is, of course, Atlantis. The existence of Atlantis is hotly debated, and people continue to search for proof that it was real.

However, there is another such island, though much lesser-known, called Hy-Brasil.

One of the earliest known reference of the island stems from Irish myths. Supposedly the island was roughly 200 miles off of the coast of Ireland in the Atlantic Ocean.

It was said to be shrouded in mist, making it invisible to passing sailors. The mist lifts for only one day every seven years.

From there, the legends expound in every direction. In some renditions of the legend, the island is the home of the Gods of Irish lore. In other retellings, Hy-Brasil is inhabited not by gods, but rather by priests or monks.

These monks were rumored to hold a vast and ancient knowledge which allowed them to create an advanced civilization where the inhabitants led a luxurious and near effortless way of life.

No matter which version of the ancient Hy-Brasil story is retold, the two main components that remain the same are the rough location and the element that it was a paradise.

More recently, many individuals have associated the Hy-Brasil legend with Ufology. Some UFO researchers contend that the island was not the home of Celtic gods, but instead an alien outpost.

These researchers point to the Celtic god Lugh as an example.

Lugh was the Celtic god of war who carried a magic spear capable of creating lightening. UFO researchers believe that Lugh was actually an alien general who possessed a laser or some other type of “death ray.”

They cite several ancient ruins that appeared to have been subject to large concentrated amount of heat. The heat, supposedly, was enough to turn the stone into glass.

Furthermore, claims have been made that aliens have contacted individuals and gave them the coordinates to Hy-Brasil in the form of binary code. Though the idea of an alien outpost in the Atlantic Ocean is pretty tough to swallow, these more recent UFO/Alien additions to the Hy-Brasil legend have propelled it into pop culture.

Actual facts about the mysterious island are far and few in between.

The earliest known reference of Hy-Brasil on any map is 1325. From then on, some maps included the island, while others chose not to include it.

As attempts to find the island failed, map-makers started to leave it off most nautical charts. By 1865, it was rarely found on any map at all.

The two locations mostly associated with Hy-Brasil are the Azores and Porcupine Bank. When it comes to mysterious islands in the Atlantic, the Azores is a common “go to” location for origins.

Atlantis researchers commonly point to the Azores as the origin of the Atlantis Legend. The Azores is highly unlikely to be the origin of the Hy-Brasil legend though, due to the fact that the archipelago is well outside of the 200 mile range of Ireland.

A more likely location is an area of the Irish shelf roughly 120 miles west of Ireland known as Porcupine Shoal. The location is currently a flourishing coral reef. However, to date no archaeological evidence has been found that places the reef above seawater, or any signs that civilization had existed there.

Even though, Atlantis is far more famous, whether it existed or not. However, Hy-Brasil is better documented, and has had more eyewitness accounts; giving this mysterious island a hint of plausibility.