Registered Sex Offender Count in the US Nearly 750k 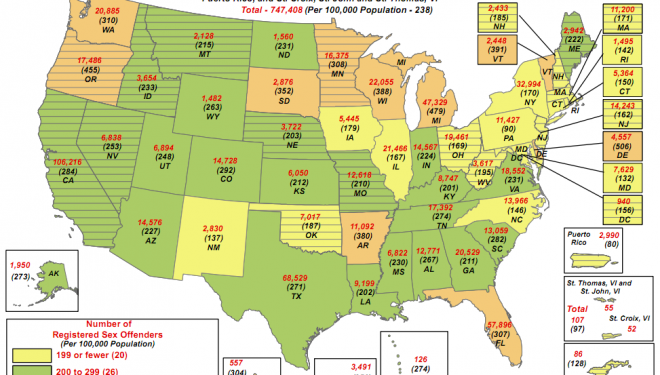 Welcome to the jungle.

According to a recent press release from the National Center for Missing & Exploited Children (1), the United States is home to 747,408 registered sex offenders.

If you think that number is scary, consider that about 100,000 of them are currently considered ‘missing’. Any one of those sex offenders could be in your neck of the woods.

Since 1994, sex offenders have been required to register with local law enforcement in order to help keep tabs on their whereabouts. Unfortunately, registration wasn’t enough.

The public still had no idea if there was a predator in the neighborhood, and the already overwhelming job of law enforcement made it difficult for them to babysit each and every registered offender.

The horrific murder of seven-year-old Megan Kanka finally resulted in Megan’s Law being passed in 1996. This law allows citizens ready access to information on sex offenders in their neighborhoods so that they can take steps to protect themselves and loved ones from dangerous predators. (2)

From there, you can access your state’s registry and then search by offender name or by location, such as your zip code. You may be surprised at what you find.

You will also find information on the type of crime the offender has been convicted of. For example, incest, rape, child molestation, etc. Depending on the state, each offender will have a picture, the area he or she lives or in some cases the actual address, as well as the severity of the crime.

Offenders may be classified by levels where a level 2 offender is a moderate risk, level 3 is a high risk predator and level 4 is sexually violent. Or they may be divided by crimes against children, sexual battery, rape or other sex crimes.

If you’re curious about how the US looks as a whole, you can check out a PDF of the US with numbers for each state.

One thing to keep in mind, however, is that the type of crime may not truly convey the severity of it.

A man convicted of statutory rape may have, in actuality, had sex with his girlfriend who was a willing partner. And this girlfriend may be legally under age to give such consent.

This does not necessarily make the offender a dangerous predator.

There have also been cases of people being falsely accused and convicted. While this is not the norm, it is something to remember when you discover a neighbor is a convicted sex offender.

If you are concerned, ask around. Your other neighbors may know more than the registry of registered sex offenders is telling you.

You may or may not be surprised to see how many sex offenders live near you. You may also feel safer knowing the faces of the people who may pose a danger in your neighborhood.

This is a good tool to help you teach your children who to stay away from. But what about that 100,000 sexual criminals who aren’t part of the registry? This is where you need to remember safety.

You likely have already taught your children not to talk to strangers, but some studies have shown that children will still get into a vehicle with a stranger if that stranger doesn’t seem scary.

Teach them that no matter how nice someone seems, anyone could be dangerous.

Sadly, in many cases this includes friends and family members, so kids need to know what kind of “touching” is not okay, and they need to know it’s okay to tell if someone tries to cross the line.

Make sure these talks are frequent so they always remember.

Don’t forget about online predators. (3) Most experts agree that you should monitor your child’s online activity and have passwords for email and social networking accounts so you can check in periodically. Older kids and adults benefit for taking self-defense courses as well.

Sexual predators count on being able to dominate their victims. So don’t be an easy victim.