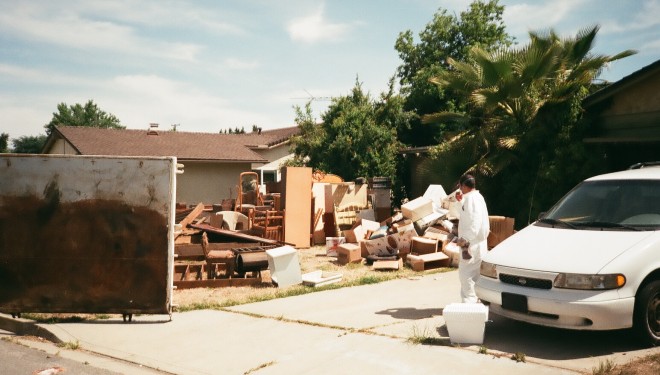 In July of 2011, the city of Calimesa, CA destroyed one of the largest single video and audio UFO collections in the world in a single afternoon. The destruction took place by a team of guys wearing anti-bacterial suits and face masks.

No, this isn’t a scene from some science fiction movie – this event really happened at a small house in Calimesa. Sherry, the woman that lived at the house, was found passed-away in the house on Tuesday. By Friday, the city had hired Ecology Control Industries (ECI) to clean out the house.

Apparently, the condition of the house created such a health hazard – Sherry had owned a number of cats – that the crew had to wear white anti-bacterial suits and face masks over their mouth and nose.

While this is something that you’d expect to see whenever a city needs to take care of a house that has become a health hazard in a community, the twist in this story is that stored in the garage was a lifetime collection of audio and video tapes and documents covering the subject of Ufology. The house was formerly owned by both Sherry and her former boyfriend – David Aaron.

If you don’t recognize the name – David Aaron was well known, particularly in the 1990s, as the owner of a massive collection of amateur video and interviews covering UFOs called the “UFO video clearinghouse.” He gave a talk for MUFON titled “UFO Videos From Around The World”, and in 1994 he was quoted in a Time Magazine article about Harvard psychiatrist John Mack (1).

The collection that was stored in the garage – directly in the path of the ECI trash removal crew – was David Aaron’s own collection, encompassing years of research, work and archiving. He has said that his collection that he started in 1986, included audio and video dated from 1947 up through 2005. Within hours, David Aaron’s collection would be lost forever, but not without a fight.

In 2010, Don Ecker of Dark Matters Radio interviewed David Aaron. Don is also another fixture of the “old guard” of Ufology – the young researchers of the 60’s through the 80’s that are now quite a bit older, but no less interested in the subject of UFOs.

Prior to the interview, Don introduced David on his blog as follows:

“When it came to the UFO subject and television and radio if Dave did not have it in his stockpile…it wasn’t available anywhere! He was The One Stop Shop for everything UFO.”

This month, Dave has been sending out emails to all of his contacts throughout the UFO community, alerting them to his tragic loss.

“On a Monday in July 2011, I received a phone call from my former girlfriend stating that she was going to loose her home, this was my house. I moved to a much larger house, and would move items into my new home, as time permitted. We made arrangements to meet on Friday to remove all the VERY RARE UFO AUDIOTAPES out of the garage where they were stored, without any incident for many years. When I arrived at the house, men in white anti-bacterial suits covered the area. One of my neighbors ran up to me and told me that ‘Sherry’ my girlfriend was found dead on Tuesday. I was in a state of semi shock.”

At this point, David’s story turns dark, as he describes starting to videotape the scene as one of the ECI workers in a white anti-bacterial suit told him that he would go get his gun and shoot him if David didn’t leave.

David went straight to the Calimesa Police Department and reported the situation – begging them to save the thousands of rare UFO tapes that were being thrown into the trash.

The Calimesa police refused him to help – referring him to the City. Unfortunately, Dave’s hands were tied – City Hall was closed already, and would be closed for the weekend.

David returned to the home, ignoring the earlier threat, and started to take photos of the men at work removing furniture, boxes and trash from the house.

From the vantage point where David began taking his photos of the situation, you can see the ECI trash unit on the roadside, furniture and boxes piled outside the house, and a certain amount of trash loaded inside the large trailer.

The scene almost looks as though there is a sorting process taking place – with trash going into the trailer, furniture going in a pile, and then other assorted piles across the front lawn.

You almost have to wonder if some of those boxes included pieces of David’s collection. As the men disappeared back into the house, David ran to the trailer unit to capture a few shots of the pile inside of it.

David explained in his emails that the collection he lost included over 1,200 rare UFO radio program recordings, many of which you probably can’t find anywhere else in the world anymore, including:

(1) A 1947 interview of Walt Whitmore interviewing Mac Brazel about the Roswell event.

(2) A 1958 recording of Major Donald Keyhole on CBS Radio interviewed on the subject of UFOs for the Air Force. The recording included the point in the show when Air Force Officers inside the studio forced producers to turn off his microphone.

(4) A collection of NICAP on-scene interviews and investigations on reel-to-reel audiotape, donated to David by Richard Hall of NICAP.

These examples are only the tip of the iceberg. Like or hate modern Ufology, anyone has to lament the loss of so much documented history.

All of my attempts to contact ECI for information on where the items removed from the house were taken were unsuccessful at the time of the publication of this article.

I contacted David Aaron directly to obtain more details about this event. It is no secret that there’s no love lost between myself and many of the old-guard Ufologists out there.

The manner in which most jump to the assumption that the NSA, CIA or some other alphabet-soup agency is involved in a massive cover-up of UFO information is unsupported by evidence. In fact, in his email, David started to imply that somehow the CIA or NSA was involved in the cover-up of this particular story – rather than the more likely reason that most mainstream journalists just have no interest in Ufology. 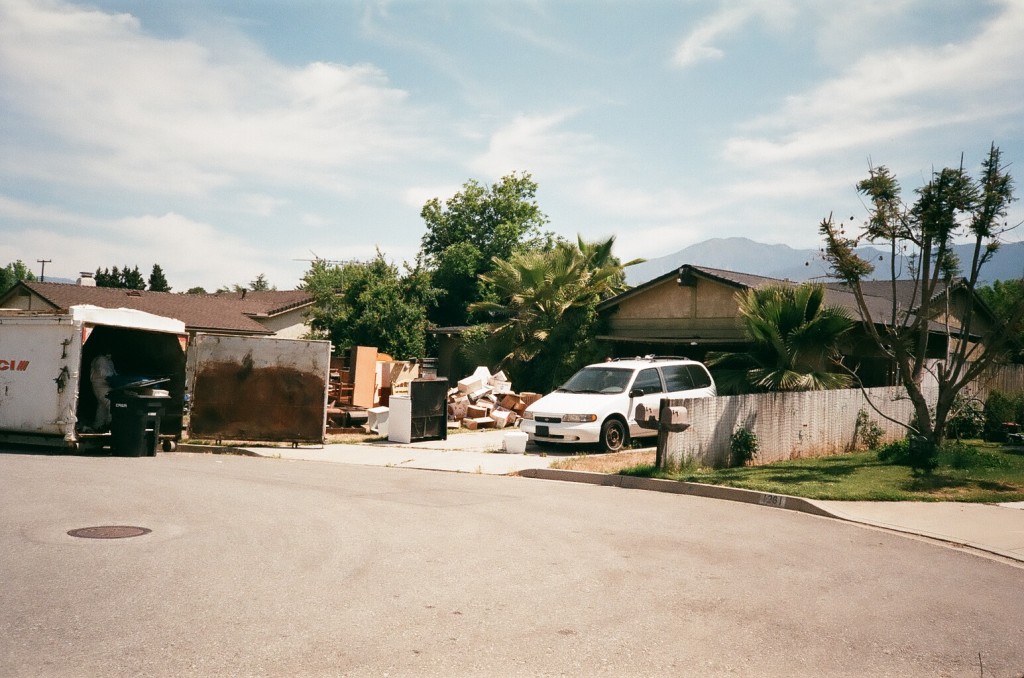 However, given the extent of this loss – and the sheer volume of history in the form of audio and video that was lost in this incident, it is very difficult not to feel bad for David. He has lost his life’s work. Even worse, the field of Ufology has lost a virtual library of historical data that can never be recovered. That is a big loss for any investigator that’s truly interested in the truth.

Ryan: David, you listed a few prime examples of some things that were in the collection, are you able to estimate a rough total of how much content (audio/video/writings) there were in total?

David: Ryan, no email can tell you the entire story of the UFO Audio Video Clearing House. The letters from the State Department, the FBI, all destroyed as well. The exact content is only an approximation, there were around 1,400 UFO audiotapes, all the old NICAP newsletters going back to 1956, what members ordered, a computer list of where each UFO report or video or audiotape was located.

Ryan: I was a bit surprised to see you mentioned the NICAP investigations were included in the collection. Were you in charge of maintaining those interviews, and do they represent the entire NICAP archive of all of their investigations?

David: I was only a member of NICAP years ago, and the Late Richard Hall just loaned me the masters to put on audio cassette I mailed back the originals reel to reel NICAP TAPES OF WITNESSES back to him years ago. Mr. Hall was getting up in years, and wanted to make sure the NICAP audio files had a safe home for future generations.

David’s concern and paranoia regarding the whole scenario was that he had just talked to Sherry merely a day before the Coroner’s report says that she died. What had they talked about? Sherry had asked David to come and move the UFO collection out of the house because she couldn’t afford to keep the house anymore. One day later, she’s found dead.

My first call to the San Bernardino Coroner stated that Sherry Died of blunt force trauma, and that boxes fell on her head. Next, it was changed to a heart attack, and next it was changed to high blood pressure (Medication which she stopped taking 6 years ago after she changed her diet and stopped the salt intake.) When I asked for the Coroner’s report, they said it would take 8 months to get. I now have it, and it shows the cause of death as heart attack due to high blood pressure.

David concluded our brief interview by lamenting the loss of his collection, and how he was completely powerless to do anything to stop it.

“….then, when I was threatened to be shot, I had to take the photos. There is not much that I can prove, as you can see by the photos..everything related to my company was thrown in a dumpster and taken to hinterlands. I think they wanted the letters from the FBI and the State Department.

I was unable to locate whom purchased what, because all our sales books, computer floppy disks (Back ups) and all our records were also destroyed. Yes, a 69 year old man can cry after seeing so many years of history thrown in the trash, even though I had no power to stop them, and law enforcement could have cared less!”

While it isn’t much consolation, David stated that he does have most of the videotapes from his collection up on the Internet, but all of the thousands of rare audiotapes, and all of his records and documents are lost forever.