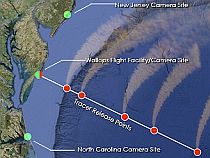 It was just after midnight last night when I remembered seeing a press release from NASA about the ATREX experiment going on from midnight through 3 a.m.

The Anomalous Transport Rocket Experiment (ATREX) is a mission to trace and understand the jet stream located just over 60 miles above the surface of the planet. The process to do this involves launching a variety of 5 rockets, which will each release a “chemical tracer” that will create thick, milky clouds that will allow scientists to track airflow within the jet stream

With that out of the way – let’s get back to reality. The NASA ATREX experiment. The goal – to observe how these thick chemical clouds would disperse and spread – carried by the jetstream traveling 200 to 300 mph far above the planet, pushing air from mid-latitudes to the furthest polar regions of the planet.

All of that is very cool – but in all honesty, the reason I scrambled to call up the Wallops Flight Facility website was because I wanted to see the missile launches taking place live. What’s better than watching five missile launches after midnight?


The Buildup to the ATREX Launch

After reading the press release from NASA about the multiple-rocket launch due to take place from Wallops Facility in Virginia, I was pretty excited to follow along with events. NASA was broadcasting everything live, and even streaming updates on the Wallops website and even on Twitter as well.

By the time I had remembered the launch was taking place, it was around 12:20 a.m. I had just finished doing some editing and answering a few emails, and I was afraid I had missed the launch.

The moment I arrived to the website, I realized that not all was going quite as planned. Apparently there were some technical issues, and the launch team was actively troubleshooting some GPS positioning descrepancies between the missile on-board systems and the launch equipment. 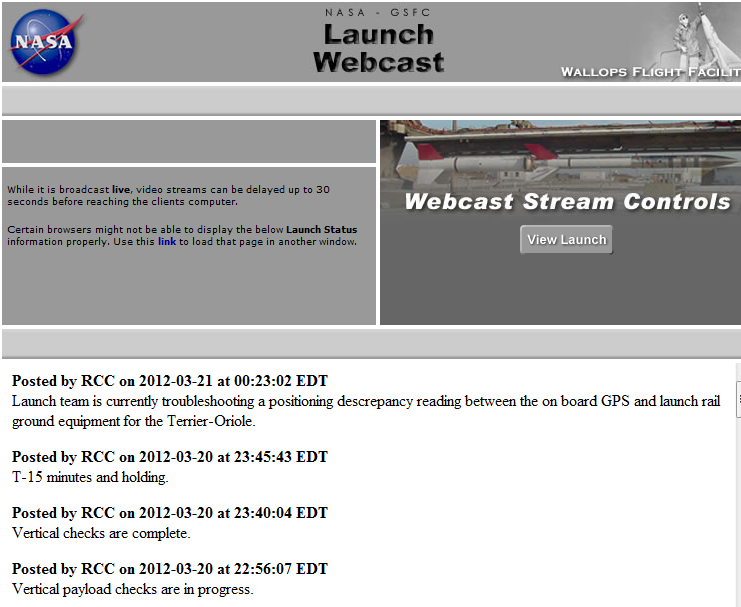 I was a bit disappointed to see that the countdown had been interrupted by technical difficulties, but then again it gave me some time to get up to speed, open up the live webcast stream, and join in with other Twitter fans.

As far as I could tell from both the website updates from the team at Wallops Flight Facility, everything had gone as planned right up until the technical problems. The only glitch was noted earlier on the website stream, when RCC at Wallops posted at 19:46:16 EDT:

The Twitter stream had a bit more activity, with both folks at NASA and fans posting questions and comments to the stream. NASA Wallops has well over 19,000 followers, and I’m sure they gained a fair number before and during this live event.

As fifteen minutes turned into thirty, I started wondering whether the technical difficulties would lead to a cancelled launch.

NASA Wallops responded to concerns from follower @karinabeck by posting, “We’re working the issue, we really don’t know much other than that at this time.”

The post didn’t exactly instill confidence that the launch would take place. While waiting, I went back to the Wallops site and opened up the live video stream of the launch location itself.

The streaming video from the live webcam didn’t really show a whole lot – at least not during the 45 minutes or so that I had it up. I waited for some activity, and then gave up – I decided to check out news on the launch and view the video in the morning – someone was bound to record it and post it on YouTube.

What I discovered instead after reading some reports about the event in the morning was that the probability for launch was never very high to begin with – less than 10 percent according to Satnews (1).

According to a new press release at the NASA ATREX mission page, the launch has been rescheduled for early morning March 22 (tonight) from 12am through 3am.

If all goes well, people staying up late enough to visit the viewing sites in New Jersey and North Carolina may finally have an opportunity to watch the five missiles streaking across the sky, as they deliver their chemical payload into the high-altitude jetstream.

According to a NASA Wallops Twitter update 49 minutes ago – the chances tonight for a successful launch are 10-15%.