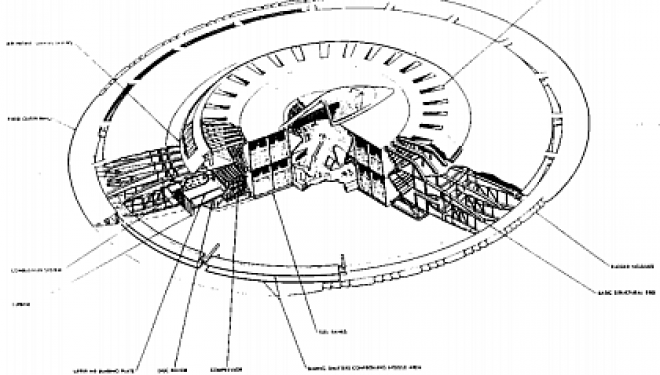 During the 1940s, and well into the 1950s, the United States Air Force was designing and testing a series of saucer shaped aircraft.

The flying saucers themselves, sometimes called the “Avrocar”, is believed to have been first researched by the Nazis during World War II.

During the war, saucer-shaped, vertical take-off aircraft was clearly being researched by both the Axis and the Allies. However, when World War II ended in 1945, America absorbed many of the German scientists into their own programs.

It was also around this time when programs focused on researching saucer-shaped aircraft went “Black.” One such program was Project Silver Bug.

Saucer-shaped or disc-shaped aircraft was no stranger to the U.S. military. During the 1940’s the U.S. Navy was experimenting with the Vought FX5U flying saucer – better known as the “Flying Flapjack.” Designed by Charles Zimmerman, the Flying Flapjack consisted of a flat, saucer-shaped body and two piston engines that drove propellers.

The aircraft’s entire body was designed to provide lift, allowing the Flying Flapjack to take-off and land at low speeds, but still maintain the capacity to sustain a very high top speed during flight.

It was stated that the Vought FX5U could hoover like a helicopter and also sustain speeds estimated at 475 mph, at an altitude of approximately 28,000 feet. However, the drawback of the design was the propellers.

The Navy was more interested in jet propulsion, and so the FX5U project ended in 1947.

The next big saucer project would be Project Silver Bug.

A technical document outlining the project is publicly available at the Air Force FOIA website (1). The report, dated February 1955, discusses the Y2 project, which was started by Canadian, John Frost.

This interest stemmed from the military’s growing concern over their runways. As traditional aircraft became larger and carried heavier payloads, runways had become longer, wider, and much thicker in order to compensate. The large, cumbersome runways were not only more expensive and time-consuming to build, but they were also an easy target for enemy bombings.

The U.S. military was hoping that they could solve all of these problems with the “radical” design of a saucer-shaped aircraft.

Project Silver Bug researched and designed two types of Avrocars, according to the posted technical report; a “tail-sitter” and a “flat-riser.” The report explains the difference between the two types:

According to the report, the tail-sitter was dismissed early on and the flat-riser, the Y2, had become the main focus of the project.

Since it was a vertical take-off and landing aircraft, it would not require a runway or landing gear. It would also utilize the radial flow turbine engine. The report (2) provides several interesting facts about Project Silver Bug, along with various drawings and schematics of the proposed experimental aircraft.

The report indicates that the military was very interested in the design and the aircraft as a whole, and ordered the research not only to continue but to build a USAF experimental aircraft that utilized the radial flow turbine engine, and that could take off and land vertically.

If the military was so interested in saucer-shaped aircraft, then where are they today? This is where the story becomes hard to follow.

The official story is that the researchers could not solve key problems of the design, such as stability, and so the project allegedly ended in 1961.

The official story also states that the contractor conducting the research, A.V. Roe, went out of business.

However, many theorists contend that this was all just a cover story. Some believe that the program was a huge success, and went deep underground.

Then of course, there are others that contend that the entire program was a farce, created to hide the fact that a UFO was discovered during the 1940s, and was actively being studied by the U.S. government.