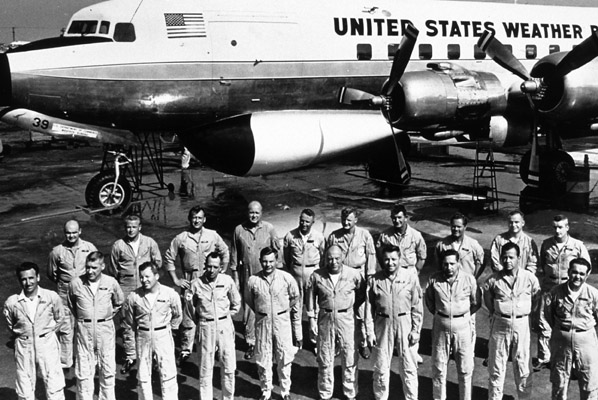 From 1962 to 1983, the United States government ran a venture known as Project Stormfury. The experimental program was an attempt to weaken tropical cyclones by flying aircraft into them and seeding them with silver iodine (1).

The premise was that artificially stimulating the hurricanes through seeding with silver iodine would cause super-cooled water in a storm to freeze, consequently disrupting the inner structure of the hurricane. The hope was that this would decrease the strongest winds.

According to the Hurricane Research Division of the Atlantic Oceanographic and Meteorological Laboratory website, in the mid-1980s Project Stormfury’s results came into question as observations in unmodified hurricanes indicated that:

“The cloud seeding had little prospect of success because hurricanes contained too much natural ice and too little super-cooled water…. The positive results inferred from the seeding experiments in the 1960s stemmed from inability to discriminate between the expected results of human intervention and the natural behaviour of hurricanes.” (2)


The Merits of Weather Modification

Due to a lack of candidate storms and a changeover in NOAA’s fleet, in 1971 the final experimental flight was flown. More than a decade later, following the last modification experiment, Project Stormfury was officially terminated.

The authors of a book entitled Project Stormfury: A Scientific Chronicle, Willoughby, Jorgensen, Black and Rosenthal, referred to the project as the U.S. government spending millions of dollars trying to do the impossible. The authors stated that in the end, “Project Stormfury had two fatal flaws: it was neither micro-physically feasible nor statistically feasible.” (3)

While the primary aim of this highly ambitious program – to manipulate tropical cyclones and effectively reduce the destructiveness of hurricanes – was a failure, Project Stormfury was not without its merits. For example, the data gathered from the experiments has actually helped meteorologists to better predict future hurricane behaviours.

In the wake of Hurricane Katrina in 2005, one of the deadliest hurricanes in the history of the United States, the US Department of Homeland Security (DHS), offered to invest $2.6 million in a three-year study on how hurricane manipulation and management may be achieved.

Working alongside the American Meteorological Society, the DHS reportedly asked a veteran of Project Stormfury to help evaluate the prospect of controlling hurricanes.

The fact that the Department of Homeland Security called upon the expertise of those who were involved in Project Stormfury is proof enough that although the ambitious project may have failed to manipulate tropical cyclones, the knowledge that was gained through the effort continues to prove invaluable to contemporary meteorologists.

With the devastating hurricane seasons occurring consecutively in 2004 and 2005, “geo-engineering” and “weather manipulation” has once again become a hot topic. Because of this, there has been a revival of government interest about the possible merits of weather manipulation. 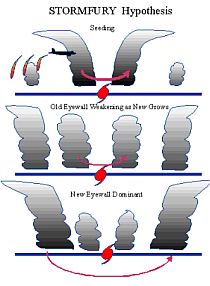 Modern Efforts to Control the Weather

In 2008, the Department of Homeland Security (DHS) started investigating ways to collaborate with scientists in an effort to moderate the land damage hurricanes can cause, as well as modifying a hurricane’s path and reducing their intensity.

Ultimately, DHS decided not to invest in field tests and new technologies for weather modification was dropped. One reason for this, according to William Laska, program manager at the DHS’s Science and Technology Division, is that “geo-engineering” remains “distasteful” to many scientists and government agencies.

Referring to how Project Stormfury has intensified the reluctance to investigate and fund technologies for hurricane modification, William Laska told Earth Magazine:

“Waving the modification/mitigation flag we got a lot of doors slammed in our face.” She added, “There’s still a sour taste from Stormfury.” (4)

It is still debatable as to whether Stormfury was cancelled for budgetary and practicality reasons, or whether it was truly decided that the seeding effort was a failure.

On the Central Florida Hurricane Center website, one reader on the website’s forum outlined an interesting appraisal of Stormfury and its merits. The user suggested that at the time of the Stormfury project, in the 60s, 70s and 80s, there was a lull in hurricane activity. Furthermore, throughout the experiments, seeding candidates had to be mature hurricanes and ones that could not hit land.

The user goes on to point out that since meteorologists now have a more advanced understanding of tropical cyclone dynamics, coupled with the fact that there has been an intense increase in hurricane activity in recent years, wouldn’t it be a good idea to resume Project Stormfury? (5)

Since Project Stormfury and its attempt to disperse the fury of hurricanes, there have been several other imaginative ideas suggested to neutralize storms – from using high volume pumps to replace warm surface water with cool deep water, to towing an iceburg into position to cool ocean surface waters.

Regardless whether or not Project Stormfury ever spawns a successful weather manipulation idea, it can always be said that the knowledge and data gained from the initial controversial project continues to be a gift to meteorologists.