Near-Miss Asteroids of 2012 and Beyond

In June of 2011, an asteroid named 2011 MD – measuring the size of a city block – shot past the earth within only 11,000 miles of the Earth’s atmosphere – an asteroid near-miss that provided amateur astronomers with a stellar view as it emitted a bright light from space. (1)

At 4:00 p.m. on January 27th, a giant chunk of space rock measuring 36 feet wide, named 2012 BX34 by the folks that name such near-earth objects, shot past Earth, coming within just 37,000 miles of the planet – only a fifth of the distance from the Earth to the moon. The encounter made it into the record books as one of the closest such an object has come to earth since 2011 MD in June of that year. (2)

On February 22nd of 2012, a team of amateur astronomers discovered yet another asteroid – which astronomers have since named 2012 DA14 – headed towards Earth on a path that will put it closer to the surface of the planet than many of the satellites currently circling the planet. The asteroid, measuring about 50 meters, is estimated to pass Earth at about 24,000 km on February 15th, 2013. (4)

These are only a few examples of the regular threat that planet Earth faces from the incoming objects from space. According to NASA scientists, such encounters with massive pieces of hurtling space rock is not at all uncommon. (5)


Watching for Asteroid Near Miss

Lindley Johnson, the program executive of the Near-Earth Object program told MSNBC that with over 50 million unknown asteroids, objects that measure only 33 feet could pass between the Earth and the moon on a regular basis without ever being detected or causing harm.

“Such an asteroid might hit Earth’s atmosphere once every 10 years, but because of its small size, it would pose no substantial threat to the people or property below… They would certainly break up in Earth’s atmosphere, or we might get some meteorites on the ground.”

This explains why most scientists don’t bother tracking or monitoring the path of such small asteroids, nor do most of these encounters ever really make the news.

However, as far as the larger incoming asteroids are concerned, in July of 2010, NASA’s Ad-Hoc Task Force on Planetary Defense called for the establishment of a new “asteroid-watching office” which would monitor space for dangerous incoming asteroids, and assist with coming up with ideas for deflecting those threatening near-Earth objects (NEOs).

Europe isn’t waiting for U.S. scientists to save the planet. The European Space Agency (ESA) has established a Space Situational Awareness (SSA) Preparatory Programme which utilizes facilities like the La Sagra Sky Survey to gather information about the hazards that might impact planet Earth.

Detlef Koschny, a scientist at the ESA’s SSA office, told reporters at Science Daily that the SSA is actively cataloging all threats.

“We are developing a system of automated optical telescopes that can detect asteroids just like this one, with the goal of being able to spot them at least three weeks before closest approach to Earth.”

If you are interested in monitoring both recent and upcoming asteroid near-miss events, you can do so right at NASA’s Near Earth Object Program web page. 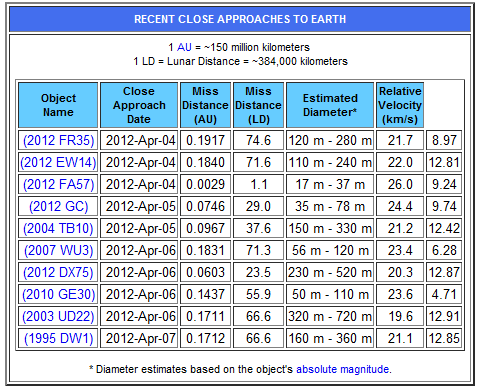 The page provides updated charts with all named asteroids, the “close approach date”, and its “miss distance” from Earth in AU units. Each “AU” is the equivalent of 150 million kilometers from Earth.

The recent asteroid near miss objects listed include 10 objects in the first week of April alone, with one object – 2012 FA57 – coming within 435,000 km from Earth.

Upcoming NRO’s include about 38 objects with a path classified as a “close approach”, and with sizes ranging all the way up to 2.3 kilometers across.

So what happens if a large asteroid is calculated as being on a collision course for Earth?

For a while, scientists thought that 2004 MN4 – a 320 meter wide asteroid – was on a collision path for Earth on Friday the 13th of April, 2029. Subsequent observations placed it within 18,600 miles above the surface of the planet – unnervingly close, but only another near-miss.

Watching for Asteroid Near Miss Threats

As we’ve previously reported, scientists are keeping an eye on 2011 AG5 – a 460 foot wide space rock that might come close enough to Earth to require a plan to deflect the object before it can cause any damage. The estimated impact if it hits, would be in 2040 – but many astronomers suspect more accurate calculations after additional observations will correct the path to one that misses Earth.

The asteroid with the strongest possibility of impacting Earth is 1999 RQ36, measuring 1,800 feet wide, which has a 1-in-1000 chance of striking Earth on September 24th, 2182. Scientists have said that the only way to deflect such an object would be to initiate deflection maneuvers over 100 years before the object’s impact date.

How could humanity deflect such a fated impact?

Most scientists and experts agree that nuclear weapons would be humanities only effective hope of making a difference in the path of an incoming object. David Dearborn of the Lawrence Livermore National Laboratory provided the results of his computer modeling of such nuclear detonation impacts on different types of asteroids at the semiannual meeting of the American Astronomical Society. He showed how nuclear detonations could successfully change the path of asteroids over a long distance with a side-impact explosion, or break apart asteroids with a direct-hit explosion.

While it’s great that computer models show that Earth may have a chance to defend itself from the sort of extinction-causing impact that the dinosaurs faced, let’s hope that humanity doesn’t have to test that theory for a very long time.