Whole Foods, the self proclaimed ‘worlds largest retailer of natural and organic foods (1)’ is outsourcing production for many of its products from China, of all places.

The problems with this are that in China there is little to no oversight to ensure that ‘organic’ products meet USDA standards for food that qualifies as organic. In addition to this, no US agencies are allowed to monitor the legitimacy of these claims within the People’s Republic of China, thus we have to take them at their word.

In a country where up to ten percent of the groundwater is contaminated by arsenic, zinc, cadmium and lead, one has to wonder about the quality of vegetables grown in China.

According to a report by ABC 7 Iteam (2), Whole Foods is selling products labeled as ‘organic’ which have been grown in China. The report goes on to state that neither Whole Foods nor the US government has agencies operating within China to verify that the products actually meet the ‘organic’ standards.

Whole Foods, according to the report, is misleading the masses into believing that their products do meet the USDA bar for organic products, although this may not be true.

While producers in the US must meet the USDA’s requirements vz how a product is grown, processed and handled, foreign producers need not worry. The problem is that although foreigners ‘should’ be following the same protocol as their colleagues in the west do, there is no way to ensure that this is occurring.

More troublesome is the fact that foreign products carrying the ‘organic’ label face no form of inspection to verify that they are actually ‘organic’.

In order to avoid the pesky hurdle of governmental oversight, Whole Foods, like so many other American firms has outsourced a potential problem. They rely on a Chinese third party to ensure quality standards are met.

The problem is that Whole Foods has outsourced the ‘inspection’ of local Chinese farmers to a third party in China. But, as Alexandra Harney explains in her book, The China Price, the quality of ‘third party inspectors’ in China is suspect at best. She explains that the reasons for poor quality in China’s ‘inspectors’ range from ignorance of the processes they are attempting to verify, to corruption.

For Whole Foods part, however, they are merely shielding themselves from culpability. Should a problem arise, Whole Foods need only blame the third party.

“.. managed in accordance with the Organic Foods Production Act (OFPA)…of the Code of Federal Regulations to respond to site-specific conditions by integrating cultural, biological, and mechanical practices that foster cycling of resources, promote ecological balance, and conserve biodiversity …are foods that are produced using methods that do not involve modern synthetic inputs such as synthetic pesticides and chemical fertilizers, do not contain genetically modified organisms, and are not processed using irradiation, industrial solvents, or chemical food additives3”

It is common knowledge that China’s over use of pesticides (4) has contaminated both the food and the land. This becomes even more problematic when we see that aside from utilizing conventional pesticides, China still produces and uses DDT on its produce (5). 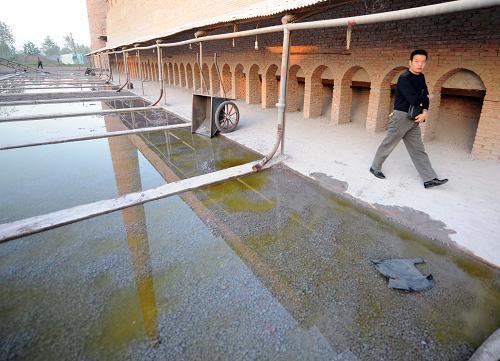 Another problem is that aside from the overt use of dangerous chemicals in food processing, Chinese groundwater is terribly contaminated. And it is this same groundwater that is used in growing the crops that find their way onto the Chinese and US tables (7).
And when half of all the shallow groundwater in China being contaminated, one has to wonder if this food deserves to be called ‘organic’. (8)

Pollution of all types is one of the reasons that cancer is now the leading cause of death in China and water pollution is supposedly to blame for the increase in stomach and liver cancer (9). Things are so bad that China now leads the world in both types of such cancers and water is partly to blame.

And in a country like China where 80% of the water is used for crop irrigation, the quality of the water supply has to be questioned (10). Unfortunately the prognosis is not good. For up until ten years ago, only 5% of household waste and 17% of industrial waste was even treated (11).

And this water is what becomes recycled into the groundwater which then becomes part of the crop producing cycle.

In response to the scathing report about Whole Foods, their company’s blog refuted the ABC channel 7 Iteam report. They contend that among other things, “… a broccoli grower in China must be visited and certified to the USDA organic standards by a certifying agent that is approved and supervised by the USDA.” (13)

But if one were to look closely they would see that Whole Foods is only claiming that, “.. a broccoli grower in China must be visited and certified to the USDA organic standards..” and not by the USDA. The difference between the two goes beyond semantics.

Whole Foods is claiming that Whole Foods is paying someone who is allegedly inspecting and holding Chinese growers to the same standards as are used by the USDA. But even Whole Foods cannot admit that anyone associated with the USDA, the body that enures the security of our food, ever tests or inspects any foreign grown organic foods.

It looks as if we must now inspect the ‘made in’ labels are our local grocers to see what it is that we are putting on our dinner plates each night.