Telling the Truth in China is Risky Business

China, in her war against freedom of information, has recently kicked out an accredited journalist from Al-Jezeera news. Consequently, Al-Jezeera has been forced to close their Beijing bureau (1).

US citizen and Al-Jezeera reporter Melissa Chan was the first foreign journalist in over 13 years to be expelled from China. Although the communist party did not release the details behind the decision to expel her, it is alleged that they did not appreciate Al-Jezeera’s take on the ‘truth in reporting’.

The last straw and reason for ostensibly removing the Al-Jezeera news network form China may have stemmed from a documentary that the news agency had done about Chinese prison labor. Of course, all of this is speculation, for in China the party rules with an iron hand and the media is muzzled.

The fact is that Al-Jezeera pulled no punches when reporting on China. The integrity of their work stood for itself, and their removal speaks volumes about China.

The party’s present grip on power is tenuous at best. And in this, the year of a once-in-a-decade leadership change, coupled with other factors, the communists are leaving little to chance. The party is aggressively squelching dissent and muzzling news reports that may shed their leadership in a bad light.

Expelling Ms. Chan is a symptom of this. It is a knee jerk response to an external stimulus that the communists fear could topple their hold on control over China and the dirty money they enjoy.


Freedom of Reporting in China, an Oxymoron at Best

Journalism is one of the most dangerous jobs in China (2). Chinese reporters are beaten, jailed and killed for their thoughts and words.

Historically, the communist party has silenced its own citizens out of fear of the consequences (3) of free speech. In a country like China with rampant corruption, pollution and product scandals, the communists fear what the commoner may do if they were well informed. Thus, extending back to the times of Mao, the Chinese government has demanded silence.

In the event that a Chinese person were to expose the truth, or even hint at things like governmental impropriety or democracy, they suffer the consequences. Li Tie learned this the hard way when he received a ten year prison term for writing a poem (4).

Yes, Mr. Li was jailed for subversion of the state just because he wrote and shared a poem (5).

In a more recent event, a photographer in Macau (a Chinese territory) was not allowed passage into the city to photograph protests. Here is the quote:

“…photographer assigned to cover protests in Macau was denied entry to the city on Tuesday. The incident, the third of its kind in three years, is disturbing. It raises serious concerns over freedom of the press, which is guaranteed in the Basic Law of both Hong Kong and Macau. (7)”

And just the other day, China became more strict in monitoring online activities.

“Hong Kong (CNN) — The hugely popular Chinese micro-blogging site, Sina Weibo, is set to introduce new rules on what topics users can and cannot post, as the country’s social networks face increasing pressure to crack down on online rumors. (7)” 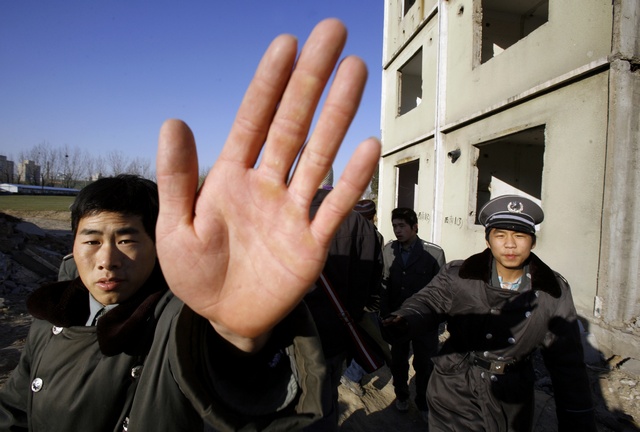 In the past, China had treated foreign reporters differently. Sure, they were shadowed and their exposure to the commoner was limited (8) and/or monitored, but they were usually allowed to remain in China and do their job. The expulsion of the Al-Jezeera reporter shows that need for control, exacerbated by fear has lead China’s communist party to ramp up the pressure.

After all, the foreign reporter had done nothing untoward, but this is China, that means nothing. In China, all it takes is one article, or book that the communist party disagrees with, and one can be banished from the kingdom.

Take, for example, the case of foreign academicians who wrote about Xinjiang-the Muslim area of China. These academics have not been allowed to enter China due to their study.

“They call themselves the ‘Xinjiang 13.’ They have been denied permission to enter China, prohibited from flying on a Chinese airline and pressured to adopt China- friendly views. To return to China, two wrote statements disavowing support for the independence movement in Xinjiang province. (9)”

It is vengeful actions such as this that frighten off many about reporting on what is actually happening in China today.

China’s communist party, in an attempt at prolonging the inevitable, is desperate to cling on to control for a few more years.

The reasons are many, there is the lust for power, pride, and money, to name a few. The problem is that what China has created is not sustainable. A dictatorship has a life like any other organism. And when certain milestones are reached, dictatorships topple.

The recent uptick in the incidence of mass protests is an indicator of a society on the brink of collapse. Added to that is the rampant corruption and the product safety scandals and the communist party’s in impotence in countering them.

One of the biggest issues the communists face, however, is an extreme level of income disparity. China has a gini coefficient of over .5 which is beyond dangerous. The gini coefficient measures the wealth disparity between the rich and poor. In China, this difference has exploded as of late.

While the communist party succeeded in pulling millions out of poverty, they have done little more than that. (China does not officially report their gini coefficient).

At one end of the spectrum are the Chinese billionaires, who are now the second most numerous in the world. This stands in stark contrast to the hundreds of millions of Chinese who live on one dollar a day or less (10).

In a classic example of communist prestidigitation, the party has convinced the people that they are better off than before, and yet the party was the reason for the poverty to begin with. In recent history, the communist party has leveraged their economic success to justify their existence as the leaders of China.

With a gini coefficient near the boiling point, the communists are cracking down with 1989 massacre-like aggression. They have backpedaled on international agreements and suspended justice and all pretensions of a rule-of-law country. The communists now juggle the need for foreign technology and money with their need for control and fear of losing it.

The tightrope they walk is one steeped in deceit and half truths, often propagated by foreign based firms as well.