The Future of Surveillance – Satellites or UAV Flights?

One of the things that I love the most about digging through historic documents that have been declassified is that even though the history described in the document may be long gone, there are tiny gems of truth that remain relevant today.

This may include a lead that can be traced forward to modern times, to reveal a shocking truth. Or, sometimes, it may simply be new revelations that produce a clearer understanding of history – and sometimes a shocking change in what people have always believed might be “true” about the past.

The gems usually come in redacted sections of declassified documents. The folks that redact information by blanking out words or sentences do so in order to protect either sensitive information that still has an effect on National Security, or to protect the people that were involved, who still might be alive today.

While I was reading through a CIA report titled “And the Truth Shall Keep You Free” by Albert Wheelon, published in “Critical Issues Seminar”, I spotted and interesting snippet with two redactions.

In this article, I’m going to examine the context of those redactions and try to deduce the redacted information, and then take a look at what that information means about the future of aerial spying and surveillance.

This particular section was in the conclusion of the paper. The paper itself was mostly an overview of political events and difficulties that the CIA faced in the 1960s and 1970s, not the least of which included the development of America’s space and air-based surveillance infrastructure against the USSR during the Cold War.

It is a fascinating read, provided from an insider and offering insights about those events that few other people in the world could offer with such authority.

However, what interested me the most was the next to last paragraph of the report, where Wheelon wrote:

“What you need to remember is that individuals make things happen. Jack Maxey made [–about 3 or 4 recacted words—] system happen. Les Dirkes made the near-real-time [–one redacted word–] system happen. These people are gone now, but their legacy lives on. The country is much in their debt.”

The identities of these two men are not secrets. They are well known in CIA history, and the things that they worked on and accomplished are also a part of that history. However, after reading this excerpt, I wanted to take a look at the known history about what these men worked on, to deduce what Wheelon classified as so important that “the country is much in their debt.”

First up is Jack Maxey. The report “Civilians, Spies and Blue Suits” by Jeffrey T. Richelson describes the work of both Jack Maxey and Leslie Dirkes on the CORONA program.

The report specifically states some political turmoil both Leslie and Jack faced surrounding the FULCRUM project, which the agency kept under wraps from both the USSR as well as even the NRO (National Reconnassance Organization) itself.

FULCRUM was a project to produce a satellite camera that could output high-resolution images over a wide “swath-width” rather than just the narrow band of ground imagery of the day. To be precise, the new requirement would span 60 degrees left or right of the satellite’s path – a 120 degree scan. (1)

An NRO report titled “The Hexagon Story” mentions that an evaluation of FULCRUM took place in 1965 where both Maxey and Dirks (and Wheelon) attended for the CIA. The discussion again centered on debates over the 120 degree requirement.

Ultimately, Jack’s stance as reported in this document was one of frustration. Just prior to John Crowley, the new Director for the Office of Special Projects, replacing Jack Maxey – Maxey was quoted as stating that he “felt that CIA’s role in the satellite program had been so circumscribed by the terms of the agreement that he could not continue to work within such constraints.” (2) 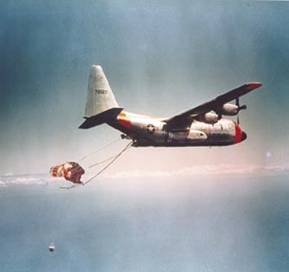 From the same CIA report mentioned above, it seems clear that Leslie was the expert on Fulcrum. The report states, “The meeting featured a briefing by Leslie Dirks on FULCRUM.” However, the report states nothing about the system being capable of anything real-time, as the redacted section of the “Truth Shall Set You Free” report implies.

In 1997, during CIA’s 50th Anniversary celebration, Leslie Dirks was one of the “50 original CIA trailblazers” honored. (3) Clearly, Leslie Dirk’s contributions to the reconnassance project was significant – beyond the FULCRUM project, which appeared to be just the beginning of what must have eventually become a real-time imagery system, as implied by the “Truth Shall Set You Free” document.

Finally, Leslie is mentioned once more in a document that also hints at the next generation satellite where apparently Leslie was one of the men working on it. That document was a 1997 interview of Dr. Hans Mark by Gernald Haines. The document was only released by the NRO this year, on February 9th, 2012.

In that interview, Dr. Mark said:

“I suggested the shuttle business to create a competition between LES DIRK’S idea, which was to put all the [—-redacted—-], and another idea for saving money, namely working with NASA. The shuttle wasn’t really the key. [—large redacted paragraph explaining the new technology propposed by Leslie—] So, one system would gain economic advantage through commonality on the spacecraft, and the other one would be commonality with NASA.”

Mark finally described the end result by the 1980s.

“[–redacted–] did not need the shuttle because it was a compact althouh heavy, paylod, so it culd be put up on the TITAN. I don’t think we ever launched a [—redacted–]”

The most interesting part of that interview hinted – in 1997 mind you – of the surveillance technology people are seeing today more and more in 2012. Mark wrote:

“It’s not as clear, and the one thing that is going to happen I think, is that space reconnaissance will become less important.”

He then continued in the conclusion:

“What is going to be important are highly capable UAV’s with the small computers, and the small sensors, and the miniaturization of everything. We cannot [can now] put things on small airplanes that we couldn’t do before. the necessity to go to space is not there anymore.”

Interestingly, he noted that the capacity in the military for using UAV’s for this purpose was already available.

“I would want UAV’s with healthy properties and very highly capable communications and data links, and you can do that now.”

Given the recent rise in use of UAV’s in the battlefield and even at home, it seems clear that Mark’s prediction over twenty years ago was spot on.