The History and Mystery of Philadelphia City Hall 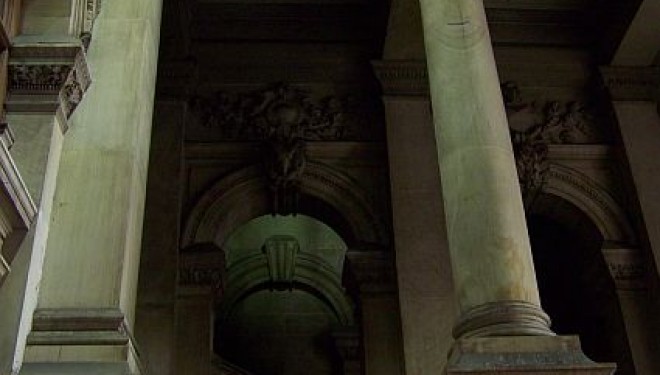 As many of you know, last month we spent a full week exploring Philadelphia. It was an amazing experience exploring some of the impressive history and even a few unsolved mysteries from the area.

As I was trying to think of where to start with the Philadelphia series, the obvious starting point came when I was walking along 17th Street on the first day.

While headed toward Market Street, I came to a crossroad and glanced to the left, and I was stunned. There was the most magnificent, beautiful building that I’d ever seen in person.

The sighting answered my question. The first exploration of the week, and the first article I would write about Philadelphia, would be about the enormous and ornate Philadelphia City Hall.


A Brief History of the Philadelphia City Hall

My intent with this series isn’t to bore people with history, but instead to surprise people with hidden mystery. Philadelphia is certainly not lacking of historic mysteries.

You can’t miss the structure as you walk through the city. The building’s main building has a significantly high tower, topped with the bronze statue of William Penn. For years, it was an informal rule that no building in the city would surpass the height of that tower – but that rule was finally broken in 1987.

Despite the fact that there are now plenty of skyscrapers throughout the city, this ornate building still captures your gaze when it comes into sight. From some angles and under certain lighting, it looks foreboding, and just as inhabited by spirits as any haunted mansion you may find in horror films.

I’ve heard rumors of mysterious groans or sighs in some areas of the great Hall. Alas, I doubt there are any restless spirits here, except maybe that of sculptor Alexander Milne Calder – as many people walk briskly through the courtyard without even a glance at the tremendous works of art that adorn both the inside and outside of this amazing building.

The structure took a while to build – starting in 1871, it was only finished thirty years later in 1901 due to a litany of problems…mostly corruption. Not a great start to the founding of the nation.

Upon approaching City Hall, I was of course mesmerized and almost completely distracted while I passed the Masonic Hall just across the street – but that particular, mysterious building would have to wait for another day.

I wanted to see the sculptures – and I was not disappointed. The outside of the building alone presents artwork which even many Philadelphia natives ignore, or are unaware of their purpose or meaning. The building is like a giant outdoor and indoor museum overflowing with jaw-dropping artwork.

You can see the many sculptures along the outside of the tower under Penn himself. Precariously perched at each edge are sculptures of Native Americans, settlers and eagles.

Walking through the North pavilion on my way to the center courtyard, I was struck with the overhead artwork, and continued to discover sculptures in every corner of the room that I looked.

By some accounts, there are about 250 marble sculptures created by Alexander Milne Calder’s artistic team. By most accounts, historians aren’t certain of the meaning behind most of the sculptures, other than the fact that they:

“…represent a wide range of topics, including historical, allegorical, mythological, people and animals from throughout the world, and figures that symbolize wisdom and attributes, virtues, and vices.” (1)

Maybe a historian will come along and prove me wrong, but I could find little behind the meaning of many of these sculptures. However the positioning of them fascinated me. Almost everywhere you turn in each pavilion, you will find a hidden treasure of artwork – some intricate carving at the top of almost every pillar. These are beautiful works of art that few people even bother to glance at as the fly by on their way to conduct city business.

Just like many of the stories we cover here at Top Secret Writers, these are beautiful oddities – very real and very present in daily life – but they are also things that in the bustle of everyday life, go unnoticed.

One of the coolest examples of animal artwork created by Calder is also in the same North Pavilion on your way toward the center courtyard. You’ll come to a room with four portals – the four directions of the compass. Above each portal, you’ll find the head of an animal. I spotted what looked like a lion, a tiger, an ox, and an elephant. Each animal served as a sentinel for the four corners of the compass.

The Four Corners of the Compass

That isn’t the only area of the building that is focused on direction – which offers a sense that the entire area offers some sort of clue to a greater purpose – some greater hidden meaning behind all of the symbolism.

This couldn’t be more true than when you enter the courtyard, that is devoid of any sort of sculpture or artwork. It is a brick courtyard that features only one symbol – that of the compass rose at the very center. I found myself examining the rest of the courtyard for clues, discovering only the bar-covered openings to the ominous basement of city hall. Turning around, I gazed up in wonder at the 500+ foot tower and the statue of Penn perched atop. I longed to stand at the observation tower – alas, as with most tourist attractions in Philadelphia, it closes after 4pm.

That was okay, because there were four more quadrants of the building to explore, and I’d already filled a quarter of my camera with artwork.

Along my way to the South Pavilion, I discovered a remnant of the past – not from the late 1800’s, but from the Cold War, a Fallout Shelter sign perched high upon the stone wall.

It certainly detracted from the artistic grandeur of the place. It served as a stark reminder of the stains that the subsequent 200+ years have placed upon the original purpose of the building – and the country itself.

Always being one to explore off the beaten path, I diverted my direction from that of the steady flow of tourists, and decided to make a detour through the deserted halls of City Hall.

What I discovered was a historic hallway, crumbling from age with scuffed floors and missing tiles in the ceiling. It was a place that reminded me of a scene from a Nightmare on Elm Street film – I expected Freddy Kruger to emerge from the turn at the end of the hallway at any moment.

After walking down one eerily quiet and deserted hallway after another, I finally emerged back in the center courtyard, and decided to head back to the South Pavilion to complete my exploration.

When I got there, I spotted more artwork around large, stone grand stairwells, with locked doors at the top of them. The lighting of these large, open, stone spaces was just stunning. The stone actually gave the reflected sunlight a green glow, and while I wanted to stay and explore the grand building longer – I noticed that evening was approaching quickly, and with it the sketchy characters that roam the city streets of Philadelphia each evening.

On my walk back to the hotel that first evening, as I noted other historic spots and buildings that I hoped to explore during the week, I realized that the city’s history would be too voluminous to capture in one week. I would have to be efficient in the sites that I chose to explore.

I planned to hit the areas that I knew existed in the city with somewhat of a hidden past – mass graves that few people knew about. Buildings with secret histories no one had unraveled for hundreds of years. Secret projects conducted under the noses of residents living in the old city.

It would be a great week, and I realized that while my first visit turned up a brilliant collection of historic artwork chock-full of symbolism and potentially hidden meanings – the next few days would hold even more mystery and symbolism than I could ever imagine.