The Scams of Silas Newton and the Aztec UFO Crash

During the 1950s through the 1970s, Silas Newton was a man involved in all sorts of surreal and unusual stories.

From claims that he witnessed several UFO crashes, to scams involving fake mining operations, Silas Newton was one of the first and most active con artists of his time.

Due to the fraudulent mining businesses, the FBI maintain files on Silas that ranged from 1951 all the way through 1970.

The FBI eventually concluded that his mining operation was nothing more than a ruse to bilk major investments from wealthy prospectors. However, in addition to the FBI files detailing the investigation of his financial and mining schemes, the FBI files also include references to his UFO claims.

The FBI vault contains a six-part collection of documents detailing the efforts taken by the Feds to investigation whether or not Newton’s mining claims were legitimate. Interestingly, the bulk of the FBI files consist of investigations into his financial and mining schemes, but there is a reference to the fact that Silas Newton was used as an “authority” in the book “Behind the Flying Saucers”.

The FBI had already established an interest in Silas’ questionable financial transactions in the 1940’s, so
Newton’s claims of seeing a flying saucer, and blaming it on a secret government research project, caught the eye of the FBI.

The first letter referencing his UFO claims arrived at the FBI on April 25th, 1951 from the Office of the Attorney General, advising the agency of an inquiry received by that office.

According to the document, that letter pointed out that Silas Newton, “had been sited as an authority for a book entitled, ‘Behind the Flying Saucers’, which was published by one Frank Scully in 1950. The gist of the book is that the so-called flying saucers are manifestations of secret scientific research behing conducted by the Government”.

This was a reference to Newton serving as an “expert authority” regarding what Ufologists refer to today as the “Aztec UFO crash” – initially detailed in Scully’s book.

The letter advised the agency that a government expert had reviewed the book, and reported that “the assertions in the book are ‘hogwash'” and pointed out that a Time Magazine article stated that “the scientific ability of the book was below that of a comic book.”

The Bureau document revealed that Newton was a wealthy speculator, and had been arrested in the past for grand larceny – not a minor offense by any stretch. 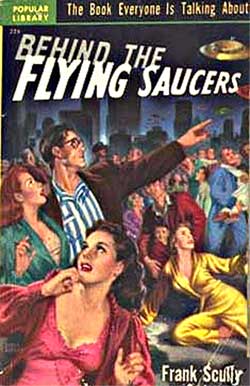 The FBI Investigations of Silas Newton

The FBI files actually contain an earlier document, from 1941, of a Special Agent report covering a detailed investigation of Silas Newton, his mining business and his financial affairs.

It isn’t clear from the document why he was being investigated, although the special agent was very focused on Newton’s financial transactions, and appeared to be trying to confirm whether or not any transactions took place between Newton and a specific individual, whose name was redacted from the released report.

That report ended in a negative conclusion – that there were no findings against Newton on that regard. However, the investigation did turn up a laundry list of other criminal charges on his record, including a 1931 warrent for his arrest on conspiracy charges, a charge in 1934 of “false stock statements”, 2 indictments in 1935, and another warrant issued for his arrest in 1934 on grand larceny charges.

It appears that from the 1940s through the 1950s, things were fairly quiet between the FBI and Newton. Files don’t pick up again until Newton made the mistake of talking to Frank Scully and being quoted in his book on “flying saucers”.

In a letter from the New Orleans FBI office, a special agent reported that Newton was claiming that a flying disc had landed on his land in the Mojave Desert, and that it “had been found intact, with eighteen three-foot tall human-like occupants, all dead on it but not burned.”

The special agent reported that, “Futher data was furnished that [redacted] had been telling the tale so prolifically in Denver that he claimed to have had telephone calls from Washington, D.C. and from the Federal Bureau of Investigation in which he was requested to keep the information to himself and that, thereafter, he became mysterious about the entire matter.”

The truth about Silas finally came out in 1970, when Newton was indicted in Los Angeles, California for fraud.

According to the FBI field office file, the investigation behind the indictment revealed that Newton was trying to sell his property to “out-of-state individuals”, by fraudulently claiming that the land contained valuable minerals.

The report stated, “No traces of minerals claimed to be on property have been located in assay and indications are property is being salted.”

The investigation started when the FBI field office in Albuquerque learned that Netwon had returned to Silver City, New Mexico and that “he has begun to perate a confidence game in this area.”

The 1970 FBI report concluded with an updated rap sheet on Silas, revealing that he had lived a long and prosperous career as a con artist. In addition to the earlier charges reported in his 1950’s file, the 1970’s report reveals the additional charges of “suspicion fugitive (con game)” in 1952, mail fraud charges (acquitted by a jury) in 1958, and finally a grand theft merchandise charge in 1967.

By all accounts, Silas was obviously nothing more than a life-long con artist and fraud, and his flying saucer claims were clearly just one more attempt – out of a litany of attempts – to somehow con just one more gullible mark.