What makes this tour so remarkable is the fact that no civilian has been allowed inside the LCC for over 30 years.

NASA’s Launch Control Center served as the brain for shuttle launches. It stands on the Southeast of the Vehicle Assembly Building. The “firing rooms” – those control center rooms field with big screens and banks of computer equipment portrayed on numerous movies – were located on the third floor of the four-story Launch Control Center.

The Launch Control Center was responsible for all operations at the launch pad, once the space shuttle was located there and ready for launch. The LCC would step through all launch pad validation checks in preparation for the final lift-off count down. The countdown in more recent launches began approximately 43 hours before launch, but most people are only familiar with the final seconds of the countdown, which have been shown in numerous documentaries and films covering the various shuttle launches throughout the years. Many people don’t realize that at T minus nine minutes, the launch sequencer takes over and the countdown is controlled by computer.

Visitors to the Kennedy Space Center Visitor Complex will have the rare opportunity to tour the Launch Control Center, which will include Fire Room 4.

In movies like Apollo 13, you watched as engineers and technicians sat along banks of large computer terminals with blinking lights and rolling displays, as the astronauts (usually displayed on one of the large monitors), sat in the shuttle, nervously bracing for the final lift-off.

Visitors will enter Firing Room 4 and walk by those very computer consoles. Those were the consoles where each specialized engineer monitored the computer system’s launch checks. According to the NASA press release, the launch computer processed thousands of system checks a minute until final launch.

Firing Room 4 still has the launch countdown clock and large mounted monitors where information about the shuttle systems and launch checks were displayed in dizzying detail.

Visitors on the tour will also have the opportunity to see the “bubble room”, a management room where high-level NASA leadership kept watch over events in the Firing Room below.

NASA plans to open the tour on June 15th, and will continue it for a limited time, until the end of 2012. The last outside visitor to see the Launch Control Center walked through the building in 1970, right after the end of the Apollo space program.

Once the first space shuttle launched in 1981, the center once again became off-limits to civilians. Now that NASA’s space shuttle program has also come to an end, NASA is once again providing access for a limited time.

One fact that visitors should keep in mind while touring the control center is the fact that so much tension and stress took place in the room throughout the decades. Engineers were under enormous pressure to spot any problem that could prove disastrous to the shutter or her crew. Most of the time, problems were identified and remedied. 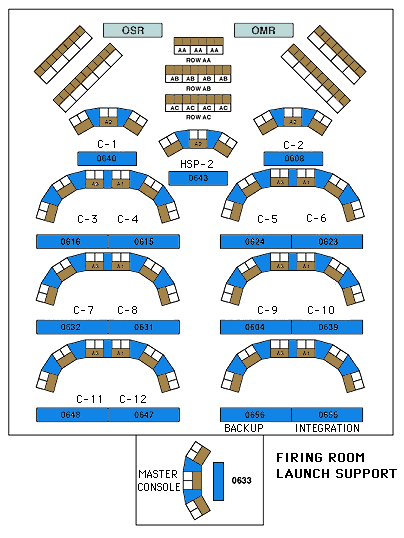 However, there were also times when problems were missed. The Space Shuttle program was not without disaster – most readers will clearly remember the Space Shuttle Challenger explosion, where seven crew members died as the shuttle broke apart 73 seconds after launch.

In the press release, former launch director Bob Sieck describes the pressure that everyone in the Firing Room was under.

“With so much on the line, the people who worked in this room were under tremendous pressure not only in daily operations but particularly as the countdown proceeded. They had to handle the tension and their emotions as the tests became faster, the astronauts took their place in the shuttle and thousands of people and news media were gathered outside to watch the launch.”

It was surely a job that held lots of rewards and a sense of pride, but working in the control center also meant carrying tremendous responsibility for the safety of the shuttle crew.

The Future of the LCC

Since the end of the Space Shuttle human spaceflight program, many Americans are wondering what will become of NASA and its facilities like the Launch Control Center.

From all indications, NASA won’t be going anywhere. Private, commercial space flight development is a growing industry. One example of this was the recent launch of SpaceX – a shuttle developed by a commercial company – in an effort to dock with the International Space Station.

According to the press release, future SpaceX launches will take place from the Kennedy Space Center in 2013.

Lucky visitors taking the LCC tour will also get a glimpse of Launch Pad 39, and will see the LCC lobby with its 152 wall plaques commemorating every single mission ever guided from the LCC.

The LCC represents such a great deal of American history – given the tremendous successes of the American space program since its construction. This history is so deep, that the building itself is now listed on the U.S. National Register of Historic Places.

For an opportunity to take the tour, visit the Kennedy Space Center website and click on “Buy Tickets”.

If you do experience this rare opportunity to visit one of the most amazing, historic sites in America, please remember to come back here and share your experiences with other Top Secret Writers readers.