The Controversy of the First Bank of the United States 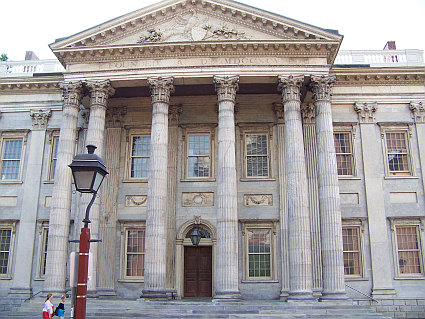 During my trip to Philadelphia in May, one of the first places that I had to check out was the First Bank of the United States.

Certainly, part of the reason that I wanted to see it was because of the beautiful architectural detail that makes up the front of the building, but another important reason is that I wanted to see the location that symbolized one of the most significant initial Constitutional battles that the young nation of the United States had to face.

The facade – much like the idea of the centralized private banking system – is grandiose, elaborate and stunningly beautiful in its own way.

The building, though beautiful, marks a moment in the nation’s history that pitted pro-democratic, Constitutionalist Thomas Jefferson against the more imperialist-leaning, big-government-minded Alexander Hamilton.

The battle between these two founding fathers over the necessity and constitutionality of a central banking system is a moment in history that few people learn about in history books.

However, given the rampant abuse of power throughout today’s world banks, it is important to take another close look at the arguments presented during this important time in history.


The Founding of the First Bank of America

The debate that this building represents – a debate that started immediately after the War for Independence – was a significant one. In fact, it was a debate that lasted from the 1780’s all the way through the next fifty years. In fact, if you consider the passage of the Federal Reserve act, the debate actually continued beyond 100 years.

The first stage of that debate, the battle between Thomas Jefferson and Alexander Hamilton, was the first test of the Constitution. Unfortunately, it was a battle that Jefferson lost, and it was a turning point that represents a break-away from the original Democratic ideals of the Founding fathers.

What spurred the debate is what often triggers debate, even among families struggling with financial issues – debt.

The country had just emerged from its first major war – the war to win its own freedom – yet, the country was left in financial turmoil. The new government, the states, and most American citizens were deeply in debt and inflation had rendered the paper money issued by the Continental Congress essentially worthless. (1)

In order to rebuild the nation – Alexander Hamilton actually looked to the very nation that Americans had just broken free from – England herself.

Hamilton studied the economies of France and Britain, and then proposed that the federal government consolidate State war debts, and then establish a national bank that could issue paper money, protect public funds, and serve as the government’s “fiscal agent.”

Visiting the First Bank of the United States

It was this early history that kept playing through my mind as I walked around the corner and started my way along the surprisingly quiet street – South Third Street – that led to the First Bank of the United States.

I didn’t even have to check for a sign to know that I had found the right building, when I saw the monolithic structure sitting off to the right.

When I saw the building, I knew that I’d just discovered one of my favorite structures in Philadelphia. It is one of the oldest – built in 1797, six years after the bank had actually opened it’s doors for business in Independence Hall.

The reason I enjoyed seeing the bank for myself was not only because of the outer beauty of the front of the building, but also because of the little historical secret – one of America’s first colossal failures – that the building represents.

In 1791, Hamilton handed a 15,000 word document that served as his rebuttal to Attorney General Edmund Randolph and Secretary of State Thomas Jefferson’s arguments against establishing a national bank.

Jefferson’s argument – misquoted through the years – was that the Constitution did not give government the authority to establish banks, and certainly not banks that issued paper currency rather than coin.

The Monopoly of a Single Bank is Evil

Hamilton won over Washington with his intellect, and Washington allowed the passage of Hamilton’s bill that would establish the First Bank. 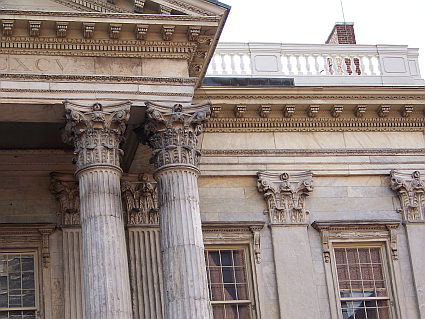 About a decade later, after observing the effects that the issuing of “banknotes” and private speculations on those by investors were having on the economy and upon the national itself, Jefferson made an observation in an 1802 letter to Albert Gallatin, where he wrote:

“The monopoly of a single bank is certainly an evil. The multiplication of them was intended to cure it; but it multiplied an influence of the same character with the first, and completed the supplanting the precious metals by a paper circulation. Between such parties the less we meddle the better.”

I’m not certain whether Alexander Hamilton really appreciated the monster that he was creating – but given Jefferson’s observations, it was obvious enough to observers that in its 20 year charter, Hamilton had created one of the largest Corporations in America – one that had established a great deal of power over the nation’s economy.

In exchange, it also brought an element of stability by manipulating its lending and the flow of funds to control interest rates.

The power held by the national bank was enough to scare Congress (with Hamilton already passed away by that point) into ending the charter in 1811.

However, once again, War brought a renewed banking debate. The War of 1812 caused prices to rise and another spike in government debt to State banks.

One thing that hasn’t changed over the last 200 years is this – heavy debts make people and organizations a slave of banks. It was the poor economy and those heavy debts that convinced Congress, under President James Madison, to once again charter a new bank – the second Bank of the United States – in 1816.

In closing, it’s important to note that it wasn’t so much the central banking system that Jefferson deplored, it was the desire of those banks to do away with precious metals in preference of paper currency. Jefferson envisioned that no good could come of this. He wrote as much in a Letter to Abbe Salimankis in 1810.

“That we are overdone with banking institutions which have banished the precious metals and substituted a more fluctuating and unsafe medium, that these have withdrawn capital from useful improvements and employments to nourish idleness, that the wars of the world have swollen our commerce beyond the wholesome limits of exchanging our own productions for our own wants, and that, for the emolument of a small proportion of our society who prefer these demoralizing pursuits to labors useful to the whole, the peace of the whole is endangered and all our present difficulties produced, are evils more easily to be deplored than remedied.”

There is no better description of the ailments faced in modern-day America, than the well-written words of Thomas Jefferson.

I propose to you, friendly reader, that the small proportion of our society who prefer these demoralizing pursuits are indeed still with us today – except they now maintain far more overwhelming control over every aspect of American society than they ever did before.

It’s a situation that Jefferson predicted, and unless the world can ever get back to a place where currencies are truly based upon something tangible and with a stable value like precious metals, the danger of financial manipulation of the masses will forever exist as a constant threat to Democracy and Freedom.