Looking for the Lost Silver Mine of Captain Sunday in Maine

When our family goes hiking, we don’t just go for a leisurely walk in the woods. A hike for us is truly an adventure – as it should be.

There are so many legends supported with historic evidence that can lead you to actual treasure, any time you head out into the woods. That treasure may not take monetary form – but instead you may discover impressive historic artifacts as well.

The secret to finding such treasures boils down to doing your research. Such adventures are also very hit-and-miss. An artifact or buried treasure that has been hidden from human hands for decades is not easily found – however stories abound about people stumbling across these things all the time.

A good example was in the 1850’s, when a farmer named John Wilson was duck hunting on Bailey Island in Casco Bay, just off the cost of Maine, was trying to retrieve a bird that he had shot. As the story goes, he slipped between two ledges, and as he struggled to work his way out of his predicament, he spotted an iron pot tucked under the ledge. After retrieving it, he discovered that it was filled with Spanish gold coins – valued at $12,000 at the time.

We are lucky to live in an area with many legends – as pirates, farmers and visitors would often bury their treasures throughout New England in an effort to keep those valuables safe.

In this particular adventure, we were looking into the legend of Captain Sunday, the leader of a group of local native Americans that allegedly worked a silver mine near the town of Cornish Maine. In this article, I’m going to cover the information that we found regarding this local legend, and then describe our search for the mines.

We first spotted the legend where we usually do, either told among locals in person or on small, obscure message boards. This particular story was told by a person posting from Maine, who lives in the local area where the legend originates.

“The legend states that Indians under a Captain Sunday mined silver near the town of Cornish, Cumberland County. The place was marked by three small hills flanking the Saco River near its junction with the Ossipee River. The mined silver was stored and never used.”

Now, that right there would be quite a discovery – a horde of mined silver, stashed away in some overgrown cave, just waiting to be found. It’s enough to capture any imagination.

“After working the mine for several years, the Indians sold the land on which it was located to William Phillips, who spent the remainder of his life searching for the mine, but never found it.”

The description of the location would be easy enough to nail down to at least a one to two-mile square area of likely locations, but the fact that Mr. Phillips spent “his life” searching for the mine meant that it would be difficult to find, if it even exists.

I found only one other reference to the legend in an article titled “The History of Silverlust in Maine” on the Some Old News blog.

That detailed, historical account described the location as three “hills of rocks” that Major William Phillips purchased from an Indian known as Meeksombe – the legendary Captain Sunday. The story accounts them as existing “some 40 miles from the sea”. When Phillips sold the land to men from Boston, he described the hills as silver mines.

According to this account, English settlers began hunting for the mines as far back as 1727, and couldn’t find them. As one story goes:

“One Englishman had searched for the mine many times and had finally persuaded the great Indian warrior Assacombuit to escort him to the very spot in 1727.”

One account published in The New England Weekly Journal” in 1727 reported that just as the Englishmen and Assoconduit were a few miles away from the mines, Assaconduit apparently fell ill and died. He was supposedly the last person aware of the exact location of those “mountains of stone” – now called “Sunday’s Rocks” by local historians. 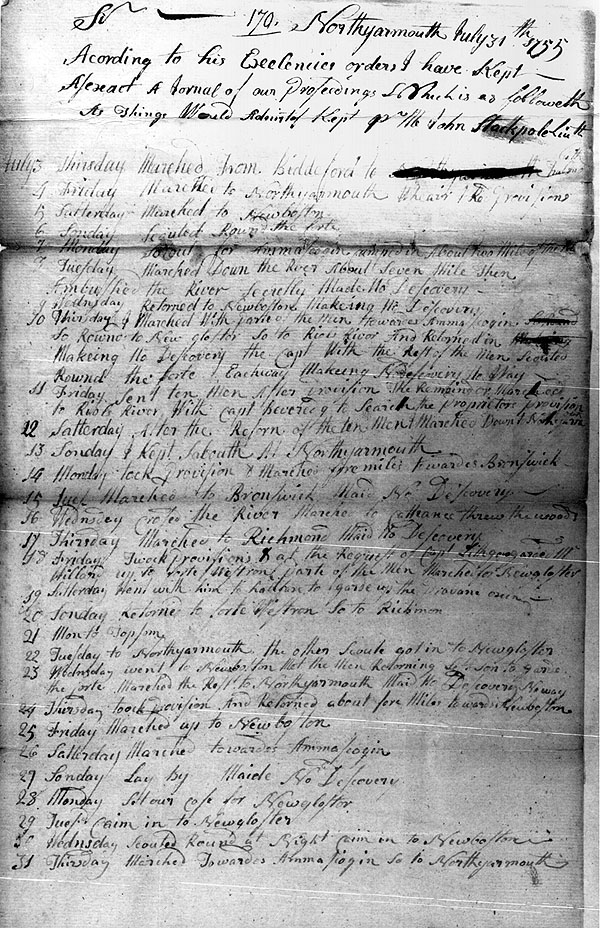 One settler that had been a prisoner of local Indians from 1745-1760, John Stackpole, apparently testified that he had seen the stones:

“…near about opposite or back of the great falls so called on the west side of the river there was a large ridge of rocks chiefly white but mixt with ising glass. They are about two or three miles above great Ossipee River so called.”

Oddly, this historical account of Sunday’s Rocks says that they are in Hiram, Maine. Historian G.T. Ridlon said that people that saw the sheets of mica were fooled into thinking that the cliffs were rich in silver.

To identify the best possible spot to explore for the “silver” cliffs, we opened up Google Maps in satellite mode and took a closer look at the Cornish area. Since the legend clearly indicates that the mines are two or three miles above the “great Ossipee River”, the starting point is to look at where the Ossipee intersects with the Saco river in Cornish.

Cornish is south of Hiram. From the point where the Ossipee and Saco rivers intersect to the town of Hiram makes up the 5 or 6 miles of river that would need to be explored. On our first trip, we would focus on the initial two or three miles of the river. 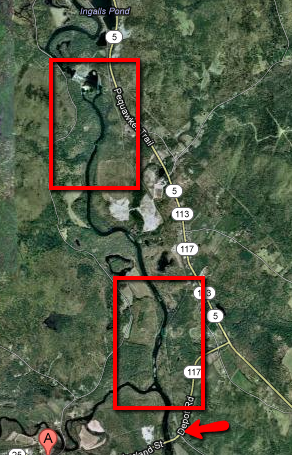 Our first search would take place within the lower box identified on the map above, but if unsuccessful we will need to revisit the area and search from the Hiram end. Our starting point on this adventure would start at an abandoned railroad depot just south of the junction of the two rivers.

The Hunt for Sunday’s Stones

We arrived near the junction of the rivers at around noon. Our gear included binoculars, flashlights and headlights, water and food obviously, a map of the area, and my Android with GPS enabled and a battery pack.

The start of our trip turned up a sight that makes every adventurer smile – an open trail that seemingly goes on forever. There’s nothing like the intrigue of an abandoned railroad.

So – we were on our way. Keeping an eye out for the junction of the two rivers was made easy by the fact that at this time of year – the spring, the leaves weren’t all in, so we could see the Saco river through the trees. When we couldn’t see it, we could hear it.

Before long, we passed the junction of the two rivers, and continued making our way North along the tracks that ran parallel to the river. All the while, we were keeping our eyes open for any sign of a cliff or hill that might glimmer with mica – or “silver” – in the midday sun.

After a few miles, we came to a spot where it appeared that there were white stones deep in the forest just off the tracks. This would be our first attempt off the trail. We marked the railroad tracks on GPS, and then entered the woods for the stones.

Before long, it became clear that we had simply uncovered old farmland that was ringed with a bleached-white stone wall all along the perimeter. False alarm. We headed back to the tracks and continued making our way North. Within another mile or so, we came across an overgrown path that looked very rarely traveled. 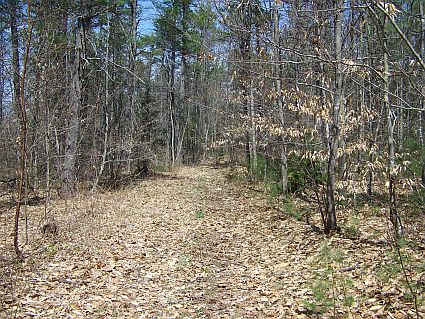 A path leading from the railroad tracks seemed rather interesting, so we decided to take a detour. We were about as far north from the river junction as we wanted to go, so this path looked promising.

Along the way, it became very clear how just such a “hill of stone” could exist, but remain virtually undetectable for centuries. The area here is filled with steep hills that appear to rise out of no where. It is difficult to explore, because you want to check what is over each rise – yet there are far too many hills like the one shown here – and nearly impossible to climb them all. 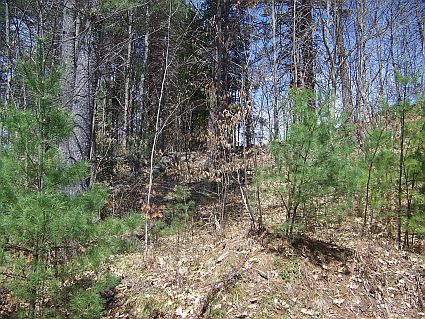 As we traveled along this trail, the scenery became more breathtaking than the possibility itself of discovering silver mines. The trail curved in and around one cliff after another, yet not a single one betrayed anything other than the stone, cold granite that makes up most of the mountains and hills in this region.

We started to get a little bit excited when we started to come across old equipment, hidden just off the trail – half buried and overgrown by brushes and foliage. In the middle of summer, most of these old vehicle frames and tires would be completely invisible to passers-by.

As we approached what appeared to be the top of the long and twisty rise from the railroad tracks, it appeared that there was an opening up head. We expected that we were approaching civilization soon – probably someone’s back yard – as the GPS unit showed we were coming very close to the main road. Alas – we discovered not a silver mine, but someone’s logging and wood-splitting operation. 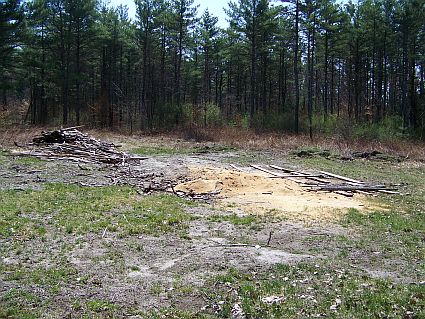 Disappointed, but not surprised, we turned back and headed for the railroad tracks again. We were not surprised to turn up nothing – as most adventures usually turn out that way. However, what we had learned is that there was certainly an operation going on in this region dating back to the 1940s or so, judging by the date of the vehicle skeletons buried in the woods throughout the area, however that the machinery and the markings throughout the forest indicate nothing more than a logging operation.

Next time, we plan to drive north to Hiram, and then head south down the river – probably taking some detours along the tall cliffs and hidden valleys that are revealed by satellite imagery.

While we didn’t discover the silver mines this time – if they exist – we did have a excellent hike and saw parts of the Maine wilderness that we never would have experienced otherwise.