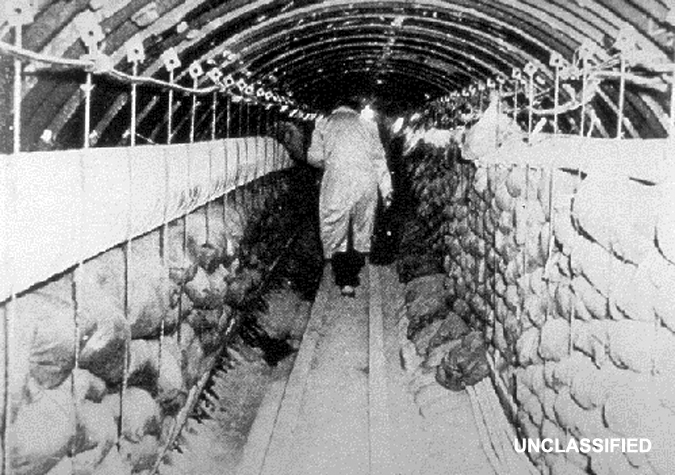 PBJOINTLY was the name of a secret Berlin Tunnel project undertaken by the Central Intelligence Agency (CIA) and the British Secret Intelligence Service (SIS) in the early to mid-1950s.

The audacious plan involved digging a secret tunnel from West Berlin into East Berlin in order to directly tap into the Russian and East German telecommunications network.

The information about the project was released in a CIA FOIA document from 2007 entitled “CLANDESTINE SERVICES HISTORY: THE BERLIN TUNNEL OPERATION 1952-1956”, a declassified report written by a member of the PBJOINTLY team in 1968. (1)

In 1948, the Russians had switched from radio technology to landline communications, thereby causing a major loss of intelligence to the American and British allies, an unacceptable position for them to be in at a time of escalating cold war tensions.

A solution was needed to plug the intelligence gathering gap and a secret tunnel was seen as the perfect opportunity.

The British SIS already had great success with several underground tunnels in Vienna, successfully tapping into Russian landline networks without detection since 1948. These operations continued until 1955, when the British ended them after Austria regained Sovereignty from the Russians. (2)

Berlin at the Heart of the Cold War Front

Like Vienna, Berlin was a city divided into four sectors, but unlike the Austrian city, Berlin was at the very heart of the cold war front. The American and British spy agencies would have to contend with thousands of soldiers, police, border guards and enemy spies watching their every move.

The first step of the operation involved determining the best location for the cable-tap, which was achieved thanks to the CIA’s penetration and infiltration of the East Berlin office of the East German Post and Telecommunication Network.

This infiltration also enabled the spies to monitor some short duration communications, but they needed something permanent in order to take full advantage of it.

The agencies had to take several factors into account when deciding which location to choose from those identified earlier; the depth of the water table, the length of the tunnel, the availability of land on which to construct an installation to house the start of the tunnel, and a full and complete intelligence map of the target area.

The choice had been narrowed down to two, with one in the US sector and one in the British sector. The location in the US sector was chosen as the best candidate out of the two, primarily thanks to the water table being significantly lower than at the other location.

This negated the need for compressed air, watertight locks and watertight construction.

The challenge facing the engineers was massive. Could they really secretly build a tunnel under the noses of the East Germans and the Russians?

The length needed to reach the cable-tap point would have to be 1500m, what would they do with the estimated 3000 tons of excavated sand and dirt so as not to arouse suspicion? They also needed a cover story for the installation that would house the tunnel, one which would not look out of place in that area of Berlin?

Eventually, a solution was found, the construction of an ingenious two story warehouse facility, with an underground basement area that was in effect a bottomless pit for all of the excavated tunnel debris.

With everything falling neatly into place, the planning and logistics of the operation went into overdrive. Alan Dulles, the head of the CIA, was the main driving force of the project. From the FOIA document:

“Joint U.S. – U.K. planning for the project continued throughout 1953 and in December of that year the Director of Central Intelligence approved the terms of reference which covered formal negotiations with the British for the implementation of the project. A series of conferences in late 1953 and 1954 led to the following decisions:

(1) Procure a site, erect the necessary structures, and drive a tunnel to a point beneath the target cables;
(2) be responsible for the recording of all signals produced [redacted] and
(3) process in Washington all of the telegraphic material received from the project.

b. The British would:

(1) drive a vertical shaft from the tunnel’s end to the targets;
(2) effect the cable taps and deliver a usable signal to the head of the tunnel for recording; and
(3) provide for a jointly manned U.S. – U.K. center in London to process the voice recordings from the site.

It was jointly agreed that each side would keep the other advised in detail on all aspects of the project.” (1)

The entire project was a logistical and planning masterpiece.

PBJOINTLY Doomed From the Start

Costing $6.7 million in the 1950s – over $54 million in today’s money (3) – construction began in 1954 and by early August 1955, all three targeted cables had been tapped and vast amounts of data began flowing in to the CIA and SIS. The operation appeared to be a complete success, but unbeknownst to the allies, Operation PBJOINTLY was doomed before it even began.

The tunnel was discovered by the Russians on 21st April 1956 – exactly 11 months and 11 days after starting operation.

One of the cables that was being tapped was in a poor condition, a situation made worse after a period of heavy rainfall. This caused the cable to stop functioning, which in turn necessitated the East Germans to dig up sections of the cable and in turn, discover the tap.

Even if the tunnel hadn’t been discovered, subsequent events were to prove the Berlin Tunnel Operation wasn’t the great success it initially appeared to be.

In 1961, British MI-6 arrested George Blake, one of their own spies, after receiving a tip off from a Polish defector to the West. The defector claimed Blake was really a double agent who had for years been stealing secrets from the British and passing them on to the Russians.

The ramifications were huge; George Blake had been present at most of the meetings discussing the Berlin Tunnel, including the briefing which named the location of the tunnel and the actual target. Blake himself confirmed to his interrogators that he had passed this information on to his Soviet contact in late 1953.

If the discovery of the tunnel truly was an unfortunate accident, one wonders why the KGB allowed the project to go ahead in the first place.

The consensus of opinion suggests the Russians really had no other choice. George Blake was a tremendous asset to the KGB and had passed on to them countless high value documents which they otherwise would not have had access to. If they had shut down the tunnel, it would have alerted the CIA and SIS to the reality of a mole in their ranks.

It wouldn’t have taken too much investigative work for Blake to then be fingered as the culprit.

The more likely scenario is one of the KGB simply waiting for the perfect opportunity to present itself, enabling them to discover and shut down the tunnel while at the same time protecting their valuable source of information.

Some analysts have suggested the KGB could have used the cable tap in order to feed the allies false information, but this idea falls apart for the same reason above. If the CIA or SIS were to discover they were listening to disinformation, they would reach the conclusion that the KGB knew they are listening in on their supposedly secure communications, thereby (once again) exposing a mole in their ranks.

George Blake himself has also stated he believes that 99.9% of the information collected the operation was genuine. (4)

PBJOINTLY wasn’t a total disaster for the CIA. The sheer scope and technological know-how required of the project sent the Russians – and the rest of the world – a very clear message: Look what we can do!

George Blake aside, every single aspect of the operation worked like clockwork. If they didn’t know it before, the KGB knew then that they were dealing with a very adept, flexible and cunning adversary.

In this respect, the Berlin Tunnel Operation can be viewed as the CIA’s coming of age moment, hardly a failure by any stretch of the imagination.