The picture of beauty, right? Not what you might envision as a scene of urban water survival.

In Water Wisdom for Survival: Part One, I discussed water and water loss, especially from disease or heat. However, in a survival situation, you need to do more than reduce water loss: you need to replenish your water supply.

Water loss and the need to have more water occurs in any location, in all weather conditions (including cold), and during any activity. It can happen even in your own home.

While living in an official building called the “Palace of Justice” (no superheroes spotted there, by the way) in Galati on the Danube River, I received news that a very large glob of mercury with other toxins had escaped a location in Hungary and was headed our way via the Danube.

Luckily for me, I had good support. Men I worked with helped me procure large water containers that we filled and kept in my living area.

One last shower the day before, and then I joined the rest of an entire city that waited while extremely toxic materials moved down the river. Without water, many stores and services shut down, and fewer people were in the streets as citizens sat out the lack of life’s most necessary liquid.

I used my water only for drinking, and cooked with water as little as practicable.

After a few days, the toxic blob passed. I postponed using the tap water a while longer to be sure but, eventually, was able to use it again.

In this case, though serious, the water survival situation was temporary. I had enough water by simply stocking up. But, what if physical or social conditions had taken away my fairly clean water flowing conveniently from a tap? There are many solutions to obtaining water that range from the simple to the exotic; here are just a few options.

Beyond having regular municipal water service, the largest water producing, easiest to operate and longest-lasting way to have enough safe emergency water at home is to have a water storage and filtration system at a well, river, or lake by your home.

However, the cost, availability, legal issues and maintenance of this kind of system make it prohibitive to most people in the world.

A cheaper and simpler method for an emergency is to have some water containers stored away. This can be a great idea for the short term. Unfortunately, what most people will store won’t last past a few days or a week, and you’ll need to find more H2O.

Catchment systems gather rainwater or water from other sources and hold it. When I was in Africa and some other countries, I saw a variety of systems that gather water: from trenches that spiral down entire mountains to the many rooftop systems that harvest water around the world.

If you need something like this, you can simply hang a tarp with one side drooping toward a container to gather rainwater.
The very simple rule is the more surface area, the more water you’ll end up with. If you live in a tropical area, you can cut very large leaves and angle them to pour rainwater into containers. You can even wrap a long rag around a board or beam that angles downward and direct rainwater to a container.

If you have your own home, your own roof might be an excellent catchment system. You have many square feet of surface draining into gutters. If water looks to be in short supply, the old-fashioned barrel at the end of the gutter drain might prove very useful.

By the way, water laws are serious business, and it’s possible that someone might sue you over loss of water. So, find out the laws in your area to be careful about what additional systems you might rig up. 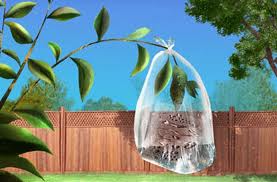 Other Ways to Find and Capture Water

A transpiration bag is another option. Trees and plants let out water. So, you can put a large plastic bag around a leafy branch. Tie it off higher on the branch, and tie a rock at the bottom of the bag. The water will gather where the rock is pulling down the bag. The trick is to make sure that any parts of the tree and the bag don’t touch except where you tie it off at the top.

If you don’t, the tree might reabsorb the water that condenses in the bag.

When I tried this, it didn’t produce the large amounts of water that a catchment system in a rainy area can, but it is at least a small source of water to add to all the other water you collect.

Watch nature for signs of water. Look for areas near where you live that have heavier vegetation. Look for animals, especially plant eaters, heading the same way each day at dusk and dawn. Birds might be easier to spot; just remember that birds can travel a long distance. A very important point is that raptors like eagles and hawks can get enough water from ingesting their kills, so they aren’t reliable indicators of water.

Use your nose. I don’t know if there’s scientific evidence for this, but I know that I was able to locate water in arid climates just by smelling it. Once, it was even on the other side of a large hill. If you’ve smelled the wet air of an approaching rainstorm, you have an idea of the scent.

Street runoff. Try to avoid water directly from a street if you can. Lots of chemicals, dirt, and anything that fell on the street make it a real health issue.

Snow. You can eat snow for water, but remember that it’ll lower your core temperature and isn’t a good idea if hypothermia’s a possibility.

Heat it in a pot or pan by melting a little water into it first so the airspaces in the snow don’t have a chance of burning your pan, or simply leave it in a container in your house to melt eventually.

Gathering snow from large branches, raised platforms, etc., can reduce the chance of scooping up an unwelcome yellow or brown surprise along with the snow.

Obviously, you can keep water in many clean containers and tanks that have not been contaminated by gasoline or other toxic substances.

If you are staying in one place, you can use a bathtub, plugged sinks, wading pool, or even dig a hole in the ground and place a plastic tarp over it. Secure it with rocks or other heavy items along the side. This basically makes a large bowl in which you can store water.

If you need to stay in one place or keep moving, typical vessels like canteens, water bottles, hydration packs, and 5 gallon containers are great.

What if you don’t have those? Use whatever’s there: empty pickle jars, sealable sandwich bags, whatever. Go old school and use what people in the past used: carve a hole in a gourd or piece of bamboo (with a joint at the top and bottom) and plug it, for example.

As with any advice in these columns, these are only a few options. Every situation is different. You are the only one who can make the best decisions for your particular circumstances.

There are many ways to obtain water, but what will you do if you need to purify it? That’s the subject of next week’s Water Wisdom article.