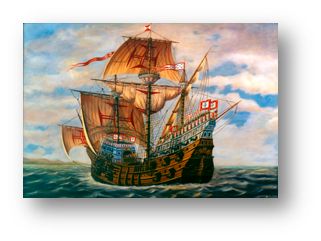 The ship was called the Flor de la Mar: Flower of the Sea.

Built in 1502, weighing 400 tons, and made for traveling from Portugal to India and back, it was twice the size of other ships that had gone on the run.

This type of vessel was called a ‘carraca’ or ‘nao’ by the Spanish, ‘caraque’ or ‘nef’ in French, and ‘carrack’ in English. In the Flor’s homeland of Portugal, the ship was known as a “nau”.

The Flor was part of an era of exploration, colonization, and exploitation. Three masts and six sails, square-rigged on the foremast and mainmast and lateen-rigged on the mizzenmast, drove the tall, rounded hull through thousands of miles of ocean waters.

The Flor was something of a prototype for what would become the typical 16th Century India nau.

The ship’s experience with difficulties maneuvering also led to the institutionalization of the “outer route.” Captains of heavily loaded big ships were ordered to sail east of Madagascar rather than navigating the fast Mozambique Channel.

The Flor’s service life had been exceptionally long for a ship on the India run. Built for only three or four years of work, she lasted from 1502-1511. However, her design made her dangerously unseaworthy when fully loaded, and her service in various campaigns had necessitated many repairs.

Eventually, these issues would play a part in the Flor sailing into history with what some claim is the largest naval treasure ever lost.

In command of the Flor was Alfonso de Albuquerque. He was known (depending on your perspective) as The Great, The Terrible, The Portuguese Mars, The Caesar of the East, and The Lion of the Sea.

Alfonso was a Portuguese fidalgo, or nobleman, whose titles included Duke of Goa and Governor of Portuguese India.

His successes in conquest were many. Included in these, he had put the King of Cochin in power, built a fort in Cochin (now known as Kochi, in western India), and established the foundation for Portugal’s empire in the East.

He had commanded a squadron of ships that sailed against the island of Ormuz in 1507: one of the chief centers of commerce in the East. He had brought Goa under Portuguese authority in 1510 and captured Malacca-one of the richest cities in the world at the time- in 1511. His successful strategy of trying to close all Indian Ocean naval passages imposed Portuguese power in a significant portion of Asia. 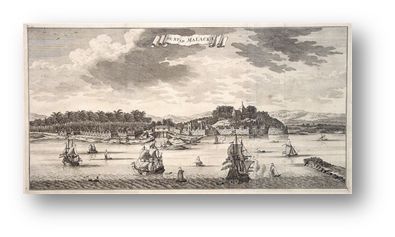 It seems Alonso did not believe in the expression, “Don’t put all your eggs in one basket.” Most of his riches were placed in one ship: an enormous treasure filled the hold of the Flor de la Mar.

As you might recall, the Flor’s design meant that it was dangerous and hard to maneuver when filled to capacity as well as having been repaired numerous times.

Despite the ship’s unsafe condition, Albuquerque used it for its large capacity to transport his display of Malaccan treasures. There was also an impressive tribute from the Kingdom of Siam (Thailand) to the king of Portugal and all of Alfonso de Albuquerque’s own fortune.

It was the largest treasure ever assembled by the Portuguese navy, and included 60 tons of gold from the house of the Sultan of Malacca. Supposedly, 200 gem chests were filled with diamonds, rubies and emeralds.

Accompanied by four other ships, the Flor set sail for Portugal in November, 1511.

Perhaps in a stroke of irony, after taking Malacca’s riches, a violent storm blew up in the Straits of Malacca. The Flor de la Mar was shipwrecked on the reefs near the Straits, just northeast of Sumatra.

The ship broke in two, and many were lost at sea. In addition, the treasure disappeared in the violent waves of the storm.
Alonso, however, was saved. He jumped into a lifeboat with five of his officers.

Following successes in other efforts, his detractors in the Portuguese court moved against him. They inspired King Manuel to replace Albuquerque with a personal enemy, Lopo Soares de Albergaria.

Alonso de Albuquerque received news of this while at sea, and it was too much for him to bear. He died aboard ship on December 15, 1515.

As you might expect, treasure seekers have searched for this exceptionally rich prize ever since the first gem-filled chest got wet.

One treasure hunter, Robert Marx, has reportedly spent somewhere around $20 million trying to find the Flor de la Mar. According to Marx’s statements, “…it’s the richest vessel ever lost at sea, with its hold loaded with 200 coffers of precious stones, diamonds from the small half-inch size to the size of a man’s fist.”

As far as we know, nobody’s found it yet.