The Amazing History of the Philadelphia Athenaeum

During my week-long visit to Philadelphia this year, the highlight of the third day was my visit to Washington Park.

Of course, I knew I couldn’t end the day without a visit to one of the oldest buildings bordering Washington Square – The Athenaeum.

My attraction to the building, as a writer, was the fact that Edgar Allen Poe was reported to have visited the Athenaeum on November 19, 1838 at its former location. He even signed his name to the guest book – today serving as evidence of his visit.

The Athenaeum was a library founded in 1814 which, according to the Athenaeum’s site, was to collect materials, “connected with the history and antiquities of America, and the useful arts, and generally to disseminate useful knowledge”.

Today, it continues to serve as a library and research center of sorts, but the subject matter is focused primarily on “matters of architecture and interior design history” from 1800 through 1945.

However, what is especially intriguing about the Athenaeum is the fact that while access is free, you need to make an advanced appointment explaining your “field of interest”, and you need to provide photo identification. USHistory.org states, “…please do not expect to walk in off the street and use the library.”


A Long History and Many Secrets

The current Athenaeum building was designed by architect John Notman in 1845, and was one of the first buildings in Philadelphia made of brownstone. It is a beautiful building, albeit overshadowed by the sheer size and height of neighboring buildings.

The building looks tiny, but the interior features first-floor reading rooms with ceilings that are 24 feet high.

One of the secrets beneath the building is the foundation of the Walnut Street Jail. The Jail was a wooden building completed in 1776 at the request of William Penn, who established the jail in an effort to establish a more “humane” penal system in the colonies. Walnut Street Jail placed inmates into hard labor as established by the courts, and was one of the first prisons to use “solitary confinement” as punishment for poor behavior in jail.

It was a predecessor to the Eastern State Penitentiary, and by the end of its time it was housing 30 to 40 prisoners in 18 square-foot rooms. The jail was demolished around 1835, and apparently the Athenaeum was built on the site, directly on top of the old foundation.

What shocked me the most when I saw the deceptively small building was the fact that it appears so miniscule when compared to the neighboring buildings.

A Glimpse of the Past

While it is true that special research and use of the “reference room” requires an appointment, you can actually visit the exhibition gallery on the first-floor without an appointment. In the exhibition gallery, you’ll see historical examples of architecture and building design – but don’t expect to get much further without making prior arrangements.

My interest in the building was really the idea of what sorts of visitors came to the library in the early 1800’s, members who could afford to pay the membership and visited the beautiful, peaceful reading room in the center of the old city. How amazing it would be to be transported back in time and to glance out of the enormous first-floor windows to the city beyond – minus the overpowering buildings that crowd the tiny building today.

It isn’t difficult, while you’re walking along 6th Street, to spot the Athenaeum the moment that you come close to it. Unlike most of the other modern buildings in the area, with state-of-the-art rotating glass doors and shiny exteriors, the entry to the Athenaeum is a perfect example of the historic architecture that its curators seek to archive.

While most people simply walked by the historic building without even more than a second glance, I had read a bit about the history of the Athenaeum and found myself imagining the sort of colonists of the early 1800’s who would walk through the front door to visit the luxurious reading room.

I turned down the quiet alley next to the Athenaeum and walked along the long brownstone building. I was very excited when I approached the rear to see a very beautiful, carefully protected outdoor plot encircled with an iron fence keeping out anyone from the street.

I looked up at the rear of the building and was rewarded with an amazing view of a terraced balcony, positioned on the second floor, where you are not allowed to go without an appointment. 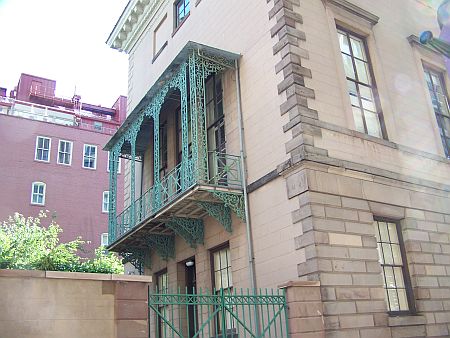 Even though I was it a hurry to get back to my room so that I could get to bed early in preparation for my upcoming visit the following day to the Naval Shipyard (to be published next week), I was glad to capture what I could of this beautiful, old building in historic Philadelphia.

Of all buildings, libraries have always been my absolute favorite, so the opportunity to visit and capture this amazing, little-known piece of American history was a real treat.

While the Athenaeum comes across as an exclusive-access library – despite the fact that it’s free to access – there is at least sign within Athenaeum “strategic plans” that hint at a greater effort by the Board of Directors to reach out to more of the public, and to reach out to families and children as well.

Hopefully, the Athenaeum will continue to stand for many years to come – an archive and an example of America’s greatest architectural and design achievements.