5 Realistic Scenarios Sparking the End of the World 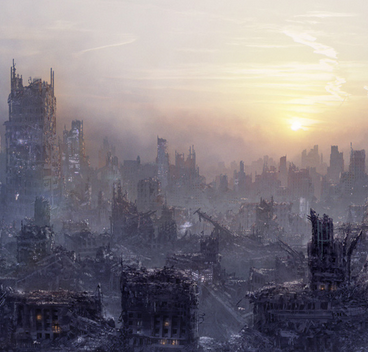 Our recent article discussing the market for underground bunkers got us thinking about end of the world scenarios.

The people wanting the protection afforded by former nuclear missile silos and the like are worried about potential catastrophes such as economic meltdown, solar flares, super volcanoes, mega earthquakes, tsunamis, nuclear war and asteroid hits. All of them sound ominous enough, but how many of them are realistic, and how many more threats are there?

The first scenario mentioned isn’t really something that could bring about the end of the world. Economic meltdown would sure make things uncomfortable for a whole lot of people, but end the world? Nah, it will more likely end up improving the world!

Solar Flares are another event that gets the doomsday preppers juices flowing. While the potential for solar flares to cause massive disruption to the power grid is already well known (1), such an event is hardly likely to bring about the end of the world.

Scientists believe there is a strong chance of a major solar flare occurring before the end of 2020 (2), so we might not have too long to wait to find out for ourselves.

A mega earthquake, also known as a “megathrust earthquake” has the potential to destroy infrastructure and life on a huge scale, but once again the potential for a massive earthquake bringing about the end of the world is pretty much zero.

Megathrust earthquakes occur when one tectonic plate is forced underneath another, releasing vast amounts of energy. This is what happened off the coast of Japan on March 11th 2011, when a magnitude 9.0 earthquake struck 43 miles from shore.

Because the quake occurred under the sea, huge tsunami waves measuring up to 133ft raced toward land and devastated much of north-eastern Japan. Over 15,800 people were killed and nearly 3,000 are still classed as missing.

The tsunami also caused 3 reactors at the Fukushima nuclear power plant to go into meltdown, but still the damage was confined to the region and did not affect the rest of the world to any great extent.

Another tsunami in 2004 caused unprecedented loss of life and devastation. The “Boxing Day” tsunami off the coast of Indonesia killed over 230,000 people and was triggered after an undersea magnitude 9.3 megathrust earthquake.

While the destruction was horrific, the affect was once again confined to the region in which the quake occurred, though this time 14 countries were affected by the deadly tsunami. 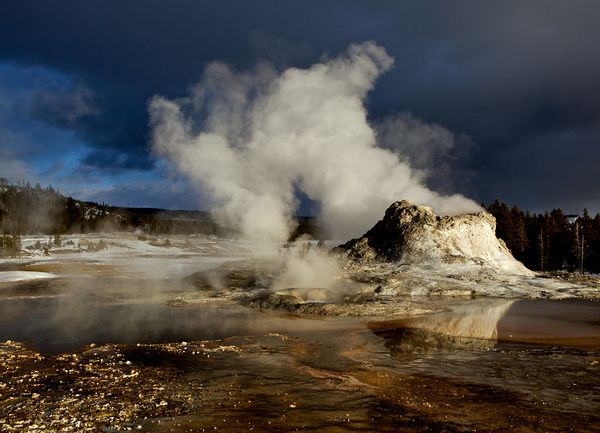 The scenarios we’ve looked at so far are certainly worrying, more so should they happen anywhere close to where we live, but the capability for them to result in the end of the world are negligible.

A supervolcano eruption on the other hand could be a different story altogether.

A supervolcano is categorized as a high-magnitude, high intensity volcano, capable of erupting anywhere between hundreds to thousands of cubic miles of magma, ash and rock into the atmosphere.

By comparison, the Mount St. Helens eruption of 1980, which killed 57 people, ejected less than one cubic mile of ash into the atmosphere (3).

The Yellowstone Supervolcano in Yellowstone National Park has the potential to be a civilization killer, when – not if – it next erupts.

These so-called Extinction Level Events (ELE’s) are very rare. They have to be, we wouldn’t be here writing about them otherwise!

The last Yellowstone super eruption happened about 600,000 years ago, and some scientists believe a supervolcano, not an asteroid impact, is responsible for killing the dinosaurs (4).

A Yellowstone super-eruption would have catastrophic consequences for the United States and a dire outlook for the rest of the world. The initial explosion would kill 87,000 people instantly, with vast amounts of ash and rock being catapulted into the atmosphere and into the Jetstream.

The earth would be plunged into darkness and the world’s food supply would be drastically affected. The world would most certainly be changed as a result of a supervolcano erupting, but the chances of the human race surviving are still relatively high – albeit in a reduced capacity to that of today.

Despite this grim outlook, there’s no need to panic just yet. The next super eruption could be well over 100,000 years away. 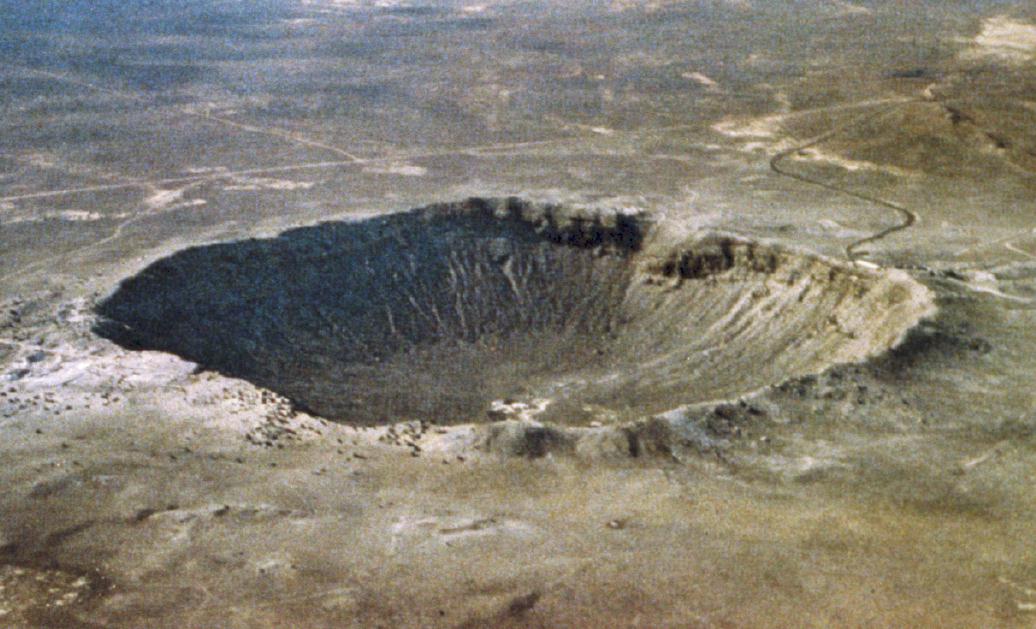 Already mentioned above in relation to what killed the dinosaurs, an asteroid impact is next on our list of potential Earth destroyers.

Many scientists believe the dinosaurs became extinct after a massive 10km wide asteroid collided with the Earth at what is now the Yucatan peninsula in Mexico about 65 million years ago (5).

There is a lot of evidence supporting this theory, not least of which is the Chicxulub crater itself at the site of impact. More than 110 miles in diameter, the crater is proof that something massive must have collided with the Earth in order to leave behind such an enormous crater.

Other evidence such as the “KT Boundary”, a thin layer of rock found all over the world in exposed areas is estimated to be 65 million years old and contains large amounts of iridium – a rare substance here on Earth. This layer sits on top of a layer of “spherules”, tiny balls of vaporized rock which were created in the huge explosion when the asteroid hit.

If such an event were to happen again, it’s a pretty safe bet that most of humanity would be wiped out. Maybe not all immediately, but with the after-affects being felt for hundreds and maybe thousands of years, our civilization would be toast.

Is Nuclear War a Threat Anymore?

From that cheery thought, let’s turn our attention to another scenario that used to sit high on the list of potential killers; all out nuclear war.

Gone are the days when East and West faced up to each other with thousands of nuclear warheads, with only the threat of mutually assured destruction (MAD) preventing that fateful touch of a button. Or are they?

Add the nuclear arsenals of the UK, China, France, India, Pakistan and Israel to the mix, then we see the threat of all-out nuclear war hasn’t disappeared at all. It is still there, still a danger and still a potential human catastrophe just waiting to happen.

One just has to hope that MAD will continue to keep the madness at bay. A nuclear winter is not the kind to be snuggling up in front of the fire with happy thoughts about playing in the snow with the children…

With super volcanoes, asteroid hits and nuclear war currently the front runners in the race to see what could end life on earth first, what other potential threats to our very existence might we face?

The Dreaded Super-Virus and Extra-Terrestrials

Films such as “I am Legend”, “Outbreak” and “Contagion” have made popular the idea that the human race could be wiped out by an as-yet undiscovered super virus.

The thought is a scary one, but we need not worry just yet. While some viruses are deadly and certainly reason to be afraid of catching them, not one single virus has a 100% mortality rate (so far!).

In order for us to become extinct, an ELE virus would have to kill everyone it came into contact with. It would have to do it quickly too. A virus in the wild usually undergoes several mutations and given enough time, scientists are likely to come up with an antidote to the bug.

No end of the world scenario would be complete without an appearance by the evil extra-terrestrials. The threat of alien annihilation has been extremely popular in fiction ever since the War of the World’s radio broadcast in 1938, but just how realistic is a threat from outer space?

No evidence exists to suggest alien invasion is something we should be preparing for. On the contrary, if an alien civilization had the technology to travel the vast distances needed in order to reach our corner of the galaxy, you can be pretty sure they would have the technology to render us obsolete without us ever knowing what hit us.

If I were a psychotic ET hell-bent on destroying humanity, I would probably do it by burning off all of the air in the atmosphere, or steering an asteroid or two in our direction. One thing is for sure, they wouldn’t need to mount an invasion force to land on Earth and subjugate us beneath their intergalactic boots, à la Independence Day.

What would be the point? It’s not necessary and it certainly isn’t an efficient use of time or resources.

If we do have extra-terrestrial neighbours then, it’s probably best to hope that if they do come and pay us a visit, it’s only for a social call. If it isn’t, well, we would never know anyway. It will all be over in a flash!