Exploring The Philadelphia Experiment in Person 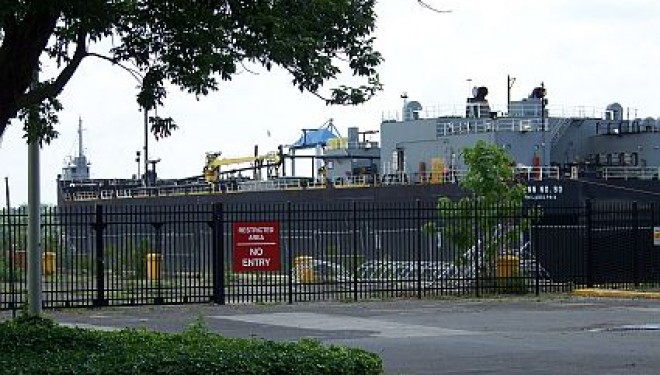 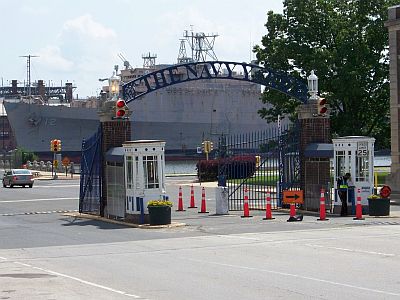 During my trip to Philadelphia in May of this year, I decided to save the best exploration for last. Thankfully, the last day of the training that I was in Philadelphia for ended a half-day early, providing me with nearly a full day to explore the alleged site of the famous Philadelphia Experiment.

The story originally came from an shady source that contacted Morris Jessup, following the publication of his book, “The Case for UFO’s”. A man named Carlos Miquel Allende told Jessup that he had personally witnessed the experiment, codenamed “Project Rainbow”, where the USS Eldridge was made invisible when it was teleported to and from Norfolk, Virginia.

As the story goes, following the experiment, a number of the sailors went mad, forcing the Navy to shelve the research until the technology – based on Einstein’s “Unified Field Theory” – was better understood.

Regardless what the Navy did at the shipyard from 1871 throughout the 1940s and beyond, the shipyard today feels like a desolate and haunted ghost town.

As I entered the area, I noticed an occasional group of very nice cars drive by – I could only assume to and from the Naval Sea Systems Command, which still operates on one part of the property.

Aside from the fact that NAVSEA consists of “command staff, headquarters directorates, affiliated Program Executive Offices (PEOs) and numerous field activities”, the area was shockingly void of security. I was able to walk all around the campus-like area, with barely a single police patrol driving by the entire three hours that I was there.

However, it became quite obvious to me that the Philadelphia Naval Shipyard doesn’t receive enough visitors to warrant tight security. Everywhere I turned, I spotted stunningly beautiful old buildings from the original shipyard. I kept snapping pictures of these deserted buildings and moving on.

The most amazing view of course, was that of the shipyard itself, the location where a ship just like these – the U.S.S. Eldridge – supposedly became “invisible” during a top secret experiment right at this location. 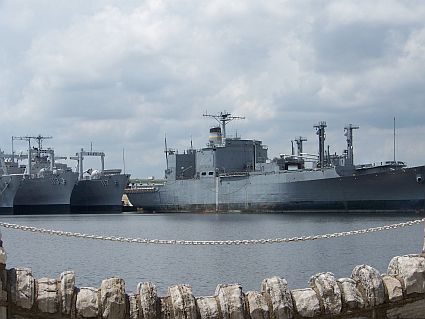 Just walking through this quiet area and taking snapshots of the old landmarks throughout the property, it seemed pretty obvious that there were most likely a fair number of highly classified, secretive experiments that took place here. In fact, no one really says that there weren’t.

However, some Navy staff took an interest in the story and researched it deeply enough to uncover two different research projects going on at the time – during World War II – that could have explained how some observer that was not “in the know” could have gotten his story so mixed up.

One of those research projects involved experiments that the Navy was performing on ships using a technique called “degaussing”, which researchers hoped would make the ships “invisible” to magnetic mines. It is completely conceivable that someone only briefly involved in the project but not fully aware of the entire scope, or potentially someone overhearing researchers talking, heard the conversation about making ships “invisible” — and of course the rest was history.

It wouldn’t be the first time that a conversation taken out of context gave birth to a massive myth that never happened.

Another experiment that more closely resembles the sort of description that came from the mysterious Allende about the “Philadelphia Experiment” involved research conducted in the 1950s on the USS Timmerman.

In these experiments, engineers replaced the ship’s standard 400 Hz generator with a smaller, high-frequency 1000 Hz generator to test the effects. A higher frequency generator would have been a significant enough alteration to the ship’s propulsion system to produce some very noticeable effects, observable by anyone nearby while the experiment was taking place.

In this particular case, project documents show that the 1000 Hz generator ended up producing what the Navy describes as “corona discharges”. The Navy claimed in a 1996 release about the experiment, that “…none of the crew suffered effects from the experiment”. 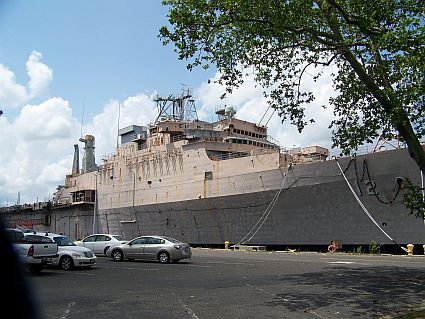 And if the experiment took place in the dark of night, you could just imagine what it must have looked like to see a Navy ship flashing and sparking in the darkness as it floated within the Shipyard. It is not at all inconceivable to consider the possibility that someone observed or learned about either of those experiments, and then drew conclusions about teleportation and ship invisibility.

Today, according to the NAVSEA website, there are 60,000 military and civilian personnel working on Navy ships and submarines at this location. That would probably explain why a police cruiser slowed down and observed me walking along with my camera at one point.

Thankfully, civilians are now allowed to explore the shipyard, so long as they remain in “unrestricted areas”.

The first old building you’ll come across as you leave the waterfront shipyard area and move into the base is an old brick dormitory that’s completely deserted these days, with all of the doors bolted and barricaded so that explorers of old buildings like yours truly can not get inside.

As I walked through the area slowly, there was certainly a sense – especially from the very old, historic buildings – that a great deal of amazing history took place at this location. In fact, the monument on the front lawn of the abandoned dormitory leaves no doubt of that. 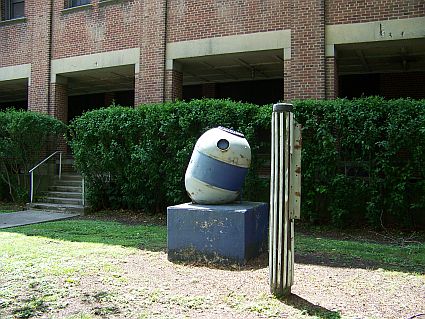 It seemed like every block that I explored, I found myself stunned by another impressive, historic building. The Commandant’s House was certainly no exception. It’s nothing short of a sprawling 3-story mansion that still features a decorative ship anchor in the front.

The walkway from the front door meets the street at this fairly large monument – a somewhat vague WWII memorial. It reads:

IN MEMORIAM:
PHILADELPHIA NAVAL SHIPYARD
EMPLOYEES WHO GAVE THEIR
LIVES IN THE SERVICE OF
THEIR COUNTRY 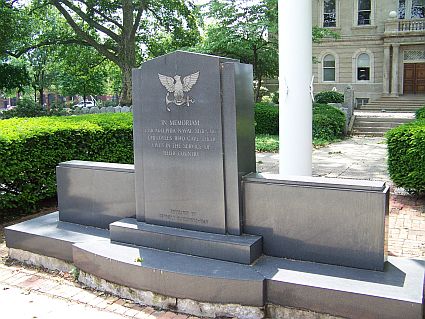 Etched at the very bottom of the monument are the words: “Dedicated by Shipyard Employees – 1947”

Simple and to the point. No names, no dates, no flowers – just a simple black memorial at the base of a massive flagpole.

As I continued exploring the shipyard, I kept coming across one amazing historic building after another. The contrast between the ornate original buildings with carved statues and beautiful brickwork, versus the utilitarian style of the WWII era was very clear.

It actually became painful, as the afternoon went on, to capture these beautiful buildings in their current state of disrepair – antique windows battered and old bricks chipped and falling away from the harsh effects of the elements, and time.

As the afternoon turned into early evening, I finally made it all the way down to the coast. There, I was greeted by the sound of power tools and heavy equipment, and the sight of a massive Navy ship under repair – or work. This was the restricted area, and the end of the line as far as this particular Top Secret Writers tour could go.

The Navy Yard is 1,200 acres of beauty, mystery, history and an abandoned past. It is a lonely area at times, where you won’t see a soul cross your path for a good part of the day, but it’s also a place where you can imagine the bustle of activity and work during it’s hayday in the midst of World War II.

Was the Philadelphia Experiment a real event? Did the Navy succeed in totally or partially rendering a ship invisible – and even teleporting it? Probably not. Yes, I suppose the Navy was probably successful at eventually making a ship “invisible” — at least to underwater mines — but, this is another example of small glimpses of some truth that gets completely muddied and turned upside down by the passage of time, and by the retelling of the tale by generations of lunatics.

I do believe that amazing things happened here – maybe even highly classified and top secret things, but teleportation and invisibility? No…probably not.