In 1949, the Chinese Red army rolled into Tibet on a mission. Now, more than sixty years later that mission is still incomplete.

Although the Communists occupy the land, they have not won over the people. The army controls the Tibetan land, but oppressive practices have done nothing to quash the Tibetan desire for independence and religious freedom.

Valiantly, the people of Tibet battle to maintain their freedom and integrity with all hope of regaining independence almost gone. As the world watches, Tibet is burning.

“From a legal standpoint, Tibet to this day has not lost its statehood. It is an independent state under illegal occupation. Neither China’s military invasion nor the continuing occupation by the PLA has transferred the sovereignty of Tibet to China. [1]”

Almost sixty-one years ago, the Communist army of China invaded Tibet, which was ruled as a sovereign nation at that time [2]. The Chinese army proceeded to take from the Tibetans their land, their freedoms and their religion. This “illegal” occupation continues today.

While Buddhist monks self-immolate in protest to the unspeakable acts of violence and aggression that they must undergo, the rest of the world watches without a care, and governments remain muted [3]. The country, culture and people of Tibet are being slaughtered as we stand by and watch it happen.

By most accounts, Tibet has been a country for nearly 2,000 years [4]. During that time, it came under foreign influence in the 13th and 18th centuries [5]. Irrespective of this fact, Tibet was free and recognized as such.

Although Tibet had no formal ties with the Chinese Ming Dynasty (1386-1644), they did have close ties with the following Manchu Empire. It was during this period that the Dali Lama agreed to become the spiritual leader of the Manchu Emperor. This event, in and of itself, did not mean that Tibet had given up its independence [6], however.

Even as far back as 1913, Tibet’s independence was recognized by many countries with claims in the area [7], which included Great Britain.

The Chinese, however, refute Tibetan claims of freedom. For their part, the Chinese point to word-of-mouth history or ancient maps drawn hundreds of years ago. The Chinese do not recognize sovereignty by force, thus they cannot claim ownership over Tibet due to their occupation of the land.

This being the case, they rely only on century old claims [8].

In 1949, the Chinese red army rolled into Tibet, claiming ownership of the land. In 1951, the Chinese forced an unequal 17-point treaty on the Tibetans, thereby subjugating the people of Tibet to the rule of China. By 1959, the Tibetans had grown weary of the illegal occupation and revolted. The revolt led to 87,000 Tibetans being murdered.

Subsequent to this event, the Dali Lama escaped to India, where he led his government in exile. By 1963, the Dali Lama had promulgated the constitution for an independent Tibet [9].

Beijing, however, has refused to acknowledge the independence of Tibet and has been brutal in asserting control over the ‘country’. 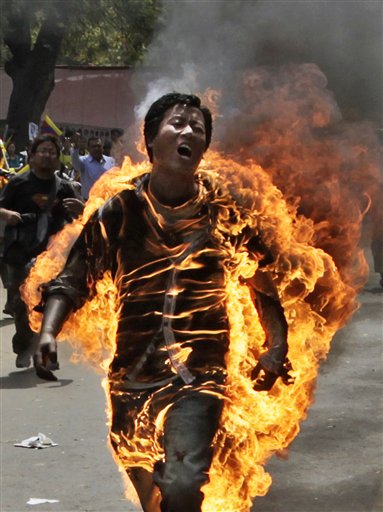 The Chinese Crackdown on Tibet

The Chinese claim that they have liberated those in Tibet, but the Tibetans see it differently. Tibetans fear the loss of their land, their culture and way of life.

As Tawu Jamphel Yeshi, 27, a Tibetan who protested Chinese rule, wrote before setting himself on fire:

Things have gotten so bad for the Tibetans that as of the writing of this article, no fewer than 54 Tibetans have self-immolated in order to draw attention to their plight. Even though the Dali Lama does not agree with this act [11], the protests continue.

The needs of the Tibetans have changed. In years past, many countries supported an independent Tibet. With the rise of China, however, fewer countries have committed to this support.

This failure to support the suffering people of Tibet has led to an increase in Communist oppression in the area and strife for the Tibetan people. As international pressure on China has waned, the Tibetans have been forced to fight for the basic liberties that all people should enjoy. 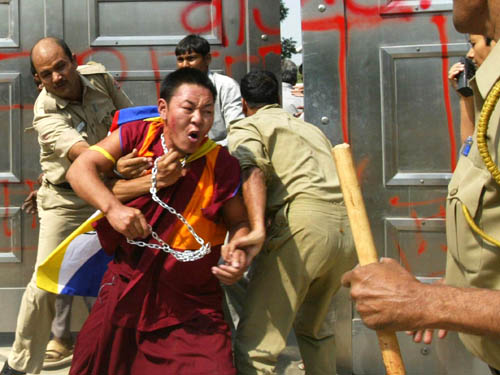 Tibetans want freedom of religion, which is a problem in atheist China.

Although religious freedom is protected under the Chinese Constitution, “freedom to practice religion” is not. What this means is that the Chinese constitution only guarantees freedom of “normal religious activity”.

The communist party takes great liberties with what it declares as “normal”. For instance, Buddhism, which recognizes the Dali Lama and his supremacy, is forbidden. As a matter of fact, Tibetan Buddhists are not even allowed to possess pictures of the Dali Lama, nor materiel pertaining to his teachings [12].

In China, ‘freedom of religion’ means one is free to practice religion in a manner that the Communist party dictates.

Not only is the Communist party atheistic, but they also control all religion with an iron hand. The most recent problem is that the Chinese government has cracked down on all major religions within China, and sees them as a threat to Communist sovereignty.

The Tibetans in particular, are a thorn in their side. Much of this stems from the fact that the Dali Lama has fled. His continued dialogue with the West is seen as Chinese separatism, and a way to destroy China.

This is exacerbated by the love and respect that modern Tibetans have for the Dali Lama. As a consequence, the Chinese have cracked down harder than ever. The crackdown has become so stringent and often times brutal that Beijing does not want the world to realize just how bad things have gotten.

In order to maintain this blanket of secrecy, it is impossible for foreigners to get a Tibetan visa. To make matters worse, Tibet is ‘indefinitely closed’ to foreigners [13]. It would appear as if the Chinese government will do whatever it takes to hide what is truly happening in Tibet.

The Tibetans also contend that due to communist intolerance, living a decent life is all but impossible. Aside from forcing the Tibetans to renounce the Dali Lama, they must also undergo “patriotic education”, and they must abide by the Communist’s form of Buddhism.

The Tibetans claim that these practices and other policies – like the forcible removal of any and all photos of the Dali Lama – are beyond unreasonable. They also point to heavy handed practices that the Communists have forced upon them. An example of which is the numerous governmental check points that the Tibetans must pass through while traveling.

To the people of this land, it is like living in one of the tallest prisons on earth. By most accounts, the repressive policies continue. Tibetan monks are still arrested and “re-educated.”

They are beaten and forced to denounce the Dalai Lama [14].

Next week, I will dive even more deeply into some of the tragic “solutions” China has come up with for the Tibet “problem”.