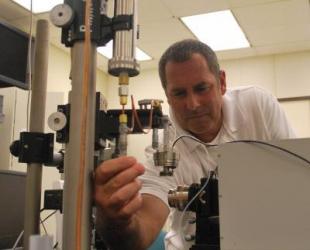 One of the greatest threats that soldiers face is the use of nerve agents on the battlefield. However, the researchers at the U.S. Army Research Laboratory (ARL) are hoping to devise a method to alert soldiers in the field when dangerous nerve agents are in the air.

At the heart of this research is multi-wavelength photoacoustics. (1)

Like many scientific discoveries, the nerve agent was discovered purely by accident. During the 1930s, a group of German scientists were in the process of developing a phosphorus-based pesticide. (2) Two years later, tabun was discovered.

Therefore, it should not be surprising that at the end of World War II, the Allies discovered large stockpiles of the nerve agent.


The Development of Nerve Agents

From that point on, countries across the globe began to study, research, and develop various types of nerve agents.

There are 10 known nerve agents categorized into three separate series based on their volatility and their ability to effect the body after the person is no longer in contact with the compound (persistent effect) .

Depending on the concentration and the length of exposure to the nerve agents, effects range from flu-like symptoms to death. According to the Organisation for the Prohibition of Chemical Weapons, since high doses and/or long exposure times lead to muscle paralysis and respiratory failure, “death caused by nerve agents is a kind of death by suffocation.” (2)

The widespread availability of such a toxic substance puts many people, not just soldiers, in harm’s way when war breaks out in their proximity. Even though the only recorded use of nerve agents on the battlefield was during the Iraq-Iran Conflict (3), there is a potential that armies will face this weapon again in the future. 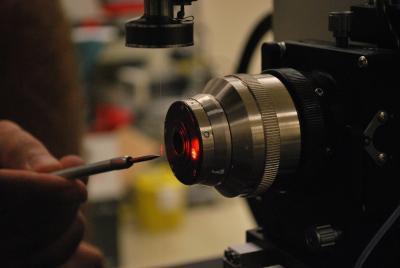 Researchers with the Army Research Laboratory are planning to equip U.S. soldiers with a reliable alert system just in case they do face such nerve agents.

Currently, there are a wide variety of options for nerve agent detection, such as the M256A1 card and Chemical Agent Monitor (CAM) for gasses along with M8 and M9 papers for liquids. However, these systems are not perfect.

OSHA states that the CAM often sends false alarms when it detects paint exhaust, fuel additives and even perfume.

Dr. Kristan Gurton, an experimental physicist in the Battlefield Environment Division (BED) is leading the research into using multi-wavelength photoacoustics to provide a reliable method to detect nerve agents. According to the Army press release, the research is based on the photoacoustic effect which is “the measurement of light’s absorption by matter, its subsequent heating and conversion to sound.”

However, one laser just would not do the trick. Gurton used multiple lasers that modulate at different frequencies, causing the gasses to heat up. According to Gurton:

“The effect was a faint acoustic wave that could detect gaseous nerve agent stimulants at trace levels in real-time.” (1)

Though the research is impressive and has tremendous implications for soldiers in the field, it is only in the experimental stages and could take some time before it can be battle ready.

The hope is to perfect the system and incorporate into methods and technologies already being used to detect nerve agents in the field.