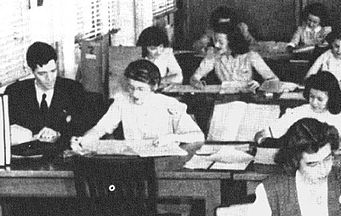 Most of this collaboration and cryptanalysis of messages took place during World War II.

According to the book, in 1943, officers from the U.S.’s War Department’s Military Intelligence Division heard rumors of a clandestine Soviet and Nazi peace pact. Colonel Clarke feared that such a pact would enable the Nazis to, “concentrate its formidable war machine against the United States and Great Britain.” (1)

In response to the rumor, Clarke’s Special Branch thought of a way to find out whether such negotiations were taking place between Moscow and Berlin. In 1939 when WWII broke out, the U.S. federal government had been gathering copies of international cables entering and leaving the United States.

Clarke believed that if the cipher used in the Soviet cables could be broken, the secret messages between Soviet officials in the U.S. and their superiors in Russia would reveal if Stalin was chasing a separate peace. In 1943, Colonel Clarke established a program to analyze ciphered Soviet diplomatic cablegrams. (1)

Haynes and Harvey continue in their book that the Soviet coded cables proved to be more complex than Clarke had anticipated, and that the Soviets were using a two part ciphering system that was, in theory, unbreakable.

Combining meticulous inspections of thousands of coded telegraphic cables with sensitive intellectual analysis, the Venona code-breakers uncovered a Soviet procedural mistake that enabled the cipher to be broken.

Although, by the time the Venona code-breakers actually converted the coded telegraphic messages into legible text, not only was the war over, but the messages showed no evidence of a Moscow/Berlin collaboration for peace. (1)

What the Venona decrypts did reveal was the existence of Soviet espionage. According to the book, in 1944, one of the first cables that was converted into readable text was a message made by KGB officials in New York and showed that the Soviet had permeated one of the most secret of projects in the United States, the atomic bomb project. (1)

During the next four years, the Venona Project gathered evidence from decrypted cables that showed the Soviet Union had spies working in virtually all military, government and other diplomatic agencies throughout the United States. (1)

According to the Black Vault, this long-running alliance between the intelligence offices of the U.S. and the U.K. was named the “Venona Project” because the last of at least 13 code words used in the project was “Venona”, although the word has no known meaning. (2)

In 1995, the National Security Agency (NSA) began releasing decrypted documents to the public. A series of such documents are published on the Black Vault website itself.

The NSA documents span from April 1940 until September 1947. Each of the Venona documents have the words “Top Secret” written at the top of the page, which has since been crossed out with a single black line.

While the majority of the documents contain just a series of numbers and codes, with each line having a tick after them, some of the NSA papers include information with names and reports about what the Venona code-breakers found.

For example, a memo titled “Information About German Air Attacks”, sent from London to Moscow dated August 3, 1940, informs readers that on July 26th, the Sausage-Dealers (Kolbasnik), made a joint attack on shipping with torpedo boats and aircraft.

The report also states that on July 29, 1940, 50 Kesserschmitts bombed Dover and shipping lines, and the British fired back at them with Bofors and Lewis guns. The fourth point on the report informs that at night the Sausage-Dealers had begun to make frequent hedge-hopping flights in order to avoid the searchlights. (2)

The deciphered Venona messages also revealed that a disturbing number of top-ranking government officials from the U.S. had deliberately maintained secret relationships with the Soviet Union intelligence agencies, and had divulged top secret information to the Soviets, which seriously undermined American interests.

For example, in one of the NSA documents from September 26, 1947, the Venona Project unveiled that there was a certain amount of 1946 – 1947 traffic between Moscow and Canberra, with several names and codenames having emerged from the traffic. (2)

As efforts continued to identify the various individuals involved in Soviet espionage, the Venona Project continued until 1980. The decoded documents from the Venona Project are central to documenting Soviet espionage in the United States during the 1940s and World War II, at a time when Soviet activity was in its most aggressive and effective phase.