Earlier this week, we covered the history of the 1979 anthrax leak near the city of Sverdlovsk in Russia. That leak of a bioweapon came at a time when both world superpowers – Russia and the U.S. – had signed an agreement not to develop offensive biological weapons.

Over 60 people downwind of the leak died from inhaling the anthrax spores, and interestingly many more fell ill after eating the contaminated meat of cattle and other animals that had been virtually showered with the spores from the top secret bioweapons facility.

One of the most fascinating aspects of the case is the fact that mass livestock deaths that resulted from the Sverdlovsk leak coincided almost perfectly with a period of time in the United States when cattle were mysteriously dying.

The U.S. “cattle mutilations” of the 1970s have become a thing of legend amongst conspiracy circles, with theories ranging between everything from a network of satanic cults to a biological sampling program by extraterrestrial aliens.

Any serious journalist conducting a throrough investigation of the odd mutiliations, such as the early work of Linda Moulton Howe, ended up getting distracted by shady characters who convinced investigators like Linda that the activity was most certainly extraterrestrial in nature.

Eventually, with most cattle mutilation researchers eventually completely discredited as “Ufologists” or wingnut conspiracy theorists, the events surrounding the mutilations of the 70s never again received the serious investigation that it truly deserved.


Forget Mutilations, Why Were Cattle Dying?

The crux of the cattle mutilation issue boils down to the word “mutilation”. Investigators – most of whom were not animal biology experts – were so mesmerized by the odd state of the cattle carcasses that they overlooked the fundamental question – why were the animals dying in the first place?

According to Linda Howe’s earliest research focusing on the rash of cattle deaths that took place throughout Minnesota and Kansas in 1973, she found – aside from the drained blood and organs “surgically removed” – that in some cases there were “abnormally high radiation levels” detected near the dead animals upon being discovered.

The state of the animals upon discovery became the focus of most investigations. Researchers found that the animals showed no instance of struggle before dying, no human or other footprints or tracks nearby the animals, internal organs such as eyes, ears, and tongue were “removed”. Circular “incisions” were discovered on the animals made with “surgical precision that no human could perform.” (2)

The mystery became so elusive that Robert Bigelow paid his NIDS (National Institute of Discovery Science) scientists to actually explore the issue and try to solve the mystery. Dr. Colm Kelleher was the scientist involved in such a study. In his book Brain Trust, instead of tying the carefully incised wounds and missing blood to aliens, Kelleher instead blamed the federal government for conducting a “samping program” in its effort to cover-up the problem of prions and mad-cow disease in the U.S. 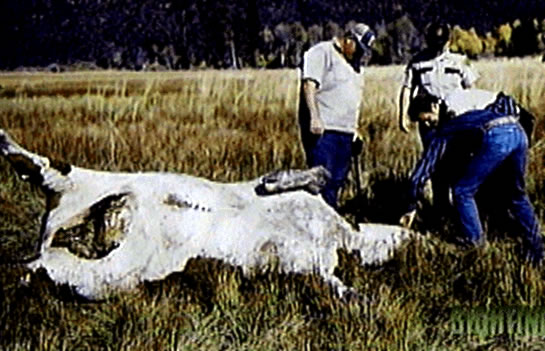 The truth is that neither aliens nor the government had anything to do with the state of the animals. This fact was proven out by an ingenious experiment thought up by an Arkansas Sheriff named Herb Marshall after the police continued to receive numerous reports of cattle and horse mutilations from across the entire region.

Herb enlisted the help of Rick O’Kelley of the Criminal Investigations Division, a livestock investigator named Lt. J.D. Snow, and several others to assist with what as called a “mutilation experiment”.

In September of 1979, the team of investigators put down a calf that was already sick, and then set up an around-the-clock observation of the carcass to observe not only what happened to the carcass, but what state it was in by the end of 36 hours.

Remarkably, the team observed that the state of the carcass after 36 hours showed the same exact signs of “surgical removals” of organs and drained blood as all of the other alleged cattle “mutilations” reported to the police by ranchers.

“What we found and what was recorded was a classic cattle mutilation. While this was in early fall, it was hot and just a few hours in the sun and the carcass bloated and pushed the insides out the anus of the calf. The blow flies were quick to remove the eye that was up, the tongue that was hanging out, and the insides that were pushed out. At night, the carcass would cool and all evidence would be pulled into the body of the carcass. We were surprised that no predators appear during the stakeout. All the ‘surgical’ removals were done by the blow flies.” (3)

The team of investigators reported their findings to the Cattleman’s Association and the press. All of the farmers and ranchers in the area stopped focusing so much on the state of the carcasses after the livestock died, but that didn’t stop ranchers and farmers in many other parts of the country from remaining mesmerized and distracted by stories of aliens and satanic worshipers. 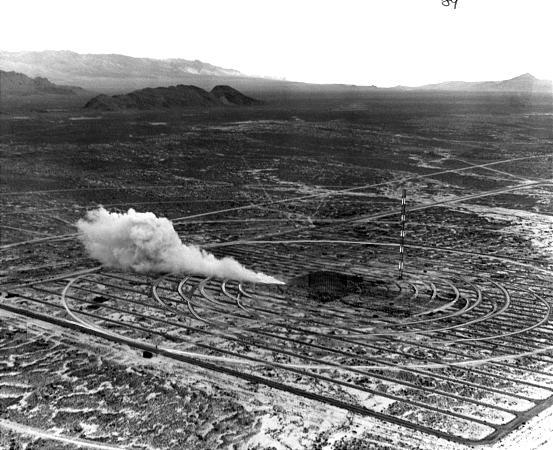 What Was Causing Livestock to Die?

What investigators should have focused on when livestock started dying in the 1970s was history. In 1968, the United States Army conducted aerial nerve agent testing at the highly secretive Dugway Proving Ground.

The incident in question involved a jet spraying the nerge agent over a 27 mile area just west of Skull Valley. At 12:30 a.m. on March 17th, 1968, an epidemiologist with the University of Utah named Dr. Bode phoned Keith Smart at Dugway to report that 3,000 sheep had died in Skull Valley. Over the next few days, the sheep death count reached over 6,000 dead sheep. (4)

The incident forced President Nixon to ban such open-air testing starting in 1969. However, the start of livestock deaths in the 1970s suggests that there could have been similar events involving chemical or biological weapons that remain classified.

Could the livestock deaths be related to the fact that following the ban of chemical and biological weapons in 1969, the U.S. government began destroying its stockpile in the early 1970s, around the time when the livestock deaths started. Documents show the destruction of biological weapons at the Pine Bluff Arsenal in Jefferson County, Arkansas from 1970 through 1972. This was just one

That was the official record, but an ABC News interview with Pentagon spokesman John McWethy in 2002 revealed that the government did conduct chemical and biological weapons tests on military personnel without their consent in the 60s and 70s.

“…it [the US] conducted some of these tests, not only on US ships, but also in the open air on American soil, in Hawaii, Alaska, Maryland, and Florida during the 1960s and early ’70s.”

This admission makes the possibility of open-air tests causing the flurry of livestock deaths in the 1970’s much more plausible. While Russia covered up the truth about the Sverdlovsk disaster for a decade and a half, is it possible that the U.S. has covered up its own, similar accident for far longer?

It is a possibilty that is far more plausible than any other cattle mutilation theory out there. Hopefully, one day, the truth about what killed all of those animals will see the light of day.