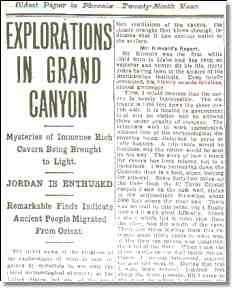 On April 5, 1909, the Arizona Gazette published a sensational article about a major archaeological discovery in the Grand Canyon made by a man by the name of G.E. Kinkaid.

The story opens with, “According to the story related to the Gazette by Mr. Kinkaid…” and then goes on to detail Kinkaid’s claim that while traveling down the Colorado River in a wooden boat, he discovered a cave that led to a “great underground citadel” where he discovered Egyptian mummies, tablets with hieroglyphics, weapons, copper instruments, and more.

The story was as elaborate as any Indiana Jones movie. Exploring the passages chiseled out of the stone walls, Kinkaid said that he saw carvings of an idol that “almost resembles Buddha”, and that the caverns and passages were large enough to have housed 50,000 people comfortably.

Unfortunately, the era in which this story was published was what is referred to as the “age of yellow journalism”.

This was a period of time in America, in the early 1900s, when newspaper editors started to publish more sensational headlines in order to increase readership. (1) This has not stopped countless conspiracy theorists today from taking this story from over a hundred years ago and claiming that it was true.


Spreading the Legend of Kinkaid’s Cavern

The term “yellow journalism” dates back to the battle between press moguls William Randolph Hearst and Joseph Pulitzer.

The two major newspapers, in a locked battle to sell more copies than the other, began using extremely sensational articles – going so far as to play with the facts of the story simply to improve sales. This activity started in 1895, and was a practice picked up by smaller newspapers all around the country.

The Arizona Gazette, when faced with the amazing tale told by G.E. Kinkaid (if he was even real), jumped on the story.

Unfortunately, numerous websites have spread the tall tale even further, failing to confirm even a single fact. There were, however, a few researchers that impressively took the time to try and confirm some of the facts within the story.

No One by That Name

In 2003, writing for Unexplained Earth, author Chris Maier decided to take a closer look at some of the details of this old story.

Maier notes that since the Gazette article mentioned G.E. Kinkaid and Professor S.A. Jordon by name, and claims several times that both were with the Smithsonian Institute, he attempted to search Smithsonian records for either name.

“I searched through records from the Smithsonian from 1900 to 1917 and could find no mention of either individual.”

Another clue that Maier cleverly pulled from the story was the claim from the Gazette that Kinkaid was “the first white child born in Idaho”. Given that this was at an era in American history where there were birth records, many of which are maintained by local historical societies, Maier tried to follow up on that lead using both spellings of Kinkaid’s name as well.

“I followed up on this lead with the Idaho State Historical Society and received the following response: ‘Regrettably, we find no word of a G E Kincaid in any of the pre-1900 federal, state (Idaho) or local (Idaho) records we consulted.”

The historical society even corrected Maier on the claim of who was the first white child born in Idaho. The society informed Maier that it was actually “Eliza Spaulding, the daughter of missionaries Henry Harmon Spaulding and Narcissa Spaulding, who was born at Lapwai, Idaho, in 1837.”

If that doesn’t debunk at least that particular claim, nothing will.

Unfortunately, after getting off to a great start, Maier then dismisses his discovery as just a “dead end”, and moves on to explain why the story must be true.

“If the article was a late April Fool’s joke or merely a fictitious article created to fill space on an otherwise slow news day, one would assume that the mention of the story would be a onetime occurrence.”

And then he goes on to quote the Gazette’s claim about a previous article describing Kincaid’s previous Grand Canyon travels. Maeir does not produce evidence that such a previous article ever actually existed, and neither has anyone else that has written about this tale.

He then goes on to quote other authors like David Hatcher Childress, who has made the outrageous claim that the Smithsonian has a record of losing or covering up finds that “go against orthodox isolationist views”.

This is a humorous claim, considering that the Smithsonian houses such socially-defining relics as one of the most complete collection of Buddhist texts, the proceedings of the Nelson Mandela trials, and the Book of Kings of 10th century Iran. (2)

Putting the Myth to Bed

In fact, the experts of the Smithsonian are probably the best source for information about this alleged story, since the Smithsonian itself was mentioned by the original Gazette story.

The truth is that the Arizona Gazette was the only newspaper that ever wrote about this story – something that would not have been true if the Smithsonian had truly uncovered such an amazing archaeological find.

In a September 1, 2009 article in Smithsonian Magazine, the organization explains:

“The article includes testimony of one G. E. Kincaid who says that he, traveling solo down the Green and Colorado Rivers, discovered proof of an ancient civilization—possibly of Egyptian origin. The story also asserts that a Smithsonian archaeologist named S. A. Jordan returned with Kincaid to investigate the site. However, the Arizona Gazette appears to have been the only newspaper ever to have published the story. No records can confirm the existence of either Kincaid or Jordan.”

Such a single-publication of a story – without any follow-up or similar announcements from other newspapers at the time – is a surefire sign that the story is a perfect example of the sort of “yellow journalism” of that era.

Unfortunately, the story being untrue will probably not stop future droves of amateur conspiracy theorists from spinning out lots of intriguing theories about how and why the story could be true.

But no…sorry….this is likely one that is clearly for the “hoax” files.