The Legend of the Red-Haired Giants of Lovelock Cave

According to the oral history of the Paiute tribe in Nevada, a red-haired tribe of cannibals lived near the Paiutes, and often harassed them with constant war, and occasionally captured victims to eat.

After years of warfare, according to Sarah Winnemucca Hopkins, the daughter of Paiute Chief Winnemucca, eventually the Paiute tribes had all had enough, and decided to band together to eradicate the Si-Te-Cah (translated as “tule-eaters”) for good.

As the legend goes, the battled waged on and eventually the Paiutes chased the last remaining Si-Te-Cah to a cave where they had taken refuge. The Paiute attackers intended to leave none alive, and so demanded that the Si-Te-Cah come out of the cave.

When they wouldn’t, the Paiutes filled the cave entrance with brush and set it ablaze, hoping to drive out the last remaining survivors. The smoke successfully flushed a few, who died in the volley of arrows, and those remaining in the cave suffocated and died.

An earthquake eventually collapse the cave entrance to the point where only bats could enter, accumulating a tremendous 6-foot pile of bat guano on the floor. It was the guano – a chief ingredient of gunpowder – that eventually drew humans back into the dark depths of Lovelock cave.

In 1886, a mining engineer from Lovelock named John T. Reid heard the legend from the local Indians, who even took him to the site to prove that the tale was true.

Reid entered the cave and discovered the 6 feet of accumulated bat guano.

He might not have been certain if he believed the story, but local miners, hearing about the guano, immediately sprang into action and began a mining operation in 1911 to haul it out.

As they pulled out the guano, there are reports that the miners reported discovering native artifacts – bones, baskets, weapons and more. There are also stories that the miners discovered a 6 foot 8 inch red-haired mummy. Other stories describe the mummy as being much larger.

There remains no verified evidence for the mummy claims. 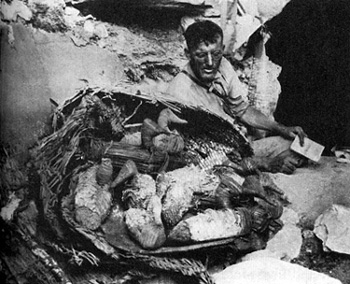 Evidence of the Red-Headed Cannibals

Unfortunately, that is where the definitive story ends and the tall tales (pun intended) begins.

It wasn’t until 1912 that the miners – tired of dealing with all of the Native artifacts at the bottom of the guano – finally called the University of California and notified them of the archaeological artifacts.

The Phoebe A. Hearst Museum of Anthropology at the University of California published a paper on Lovelock cave, and wrote:

“The site has been extensively pothunted and many materials remain in private collections. Lovelock Cave, despite years of destruction, is one of the most important sites in the history of North American archaeology.”

Why is the site so significant? Because the artifacts represented items that showed there was in fact a culture of people living in the area that were quite unlike the nearby Paiutes – a tribe of people currently unknown in the field of human anthropology.

The efforts of the first archaeologist to arrive, L.L. Loud from UC, turned up a treasure trove of relics, including some impressive duck decoys used by this unknown culture – but not a mummy, as claimed by many that recount this tale around the Internet.

Unassisted, Loud conducted excavations in the cave from April to August, 1912, and collected approximately 10,000 archaeological specimens, most of which came from three locations.

Some fascinating radiocarbon dates listed in the report include vegetable material dating back to 2030 B.C., a human femur dated 1450 B.C., human muscle tissue dating 1420 B.C., and basketry dating back to 1218 B.C.

Archaeologists concluded from this that human occupation of Lovelock cave, by this human culture, started in 1500 B.C. 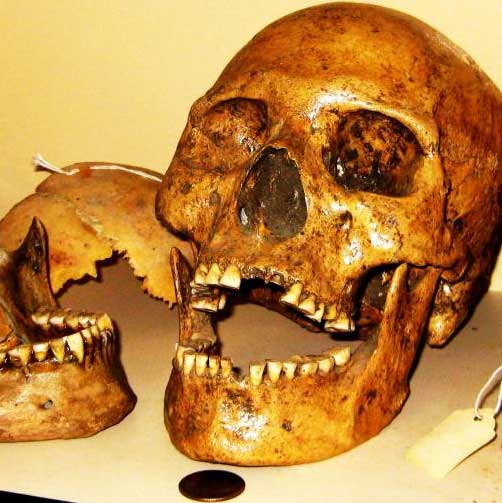 The Question of Giants

Tales abound by storytellers both offline and online about the mummy from Lovelock Cave, but the only remains independently confirmed by a few tourists to the area that have blogged about it are skulls that local museums keep in a back room and claim that they are of the Lovelock “giants”.

The skulls typically have only a slightly larger profile than normal, implying that the culture may have been slightly above average in size and height, but that the legend of their ferocity in battle appears to have skewed their actual size through history and the re-telling of the tales.

However, major museums around the country feature actual artifacts from the cave, which you can see for yourself, such as the duck decoys on display at the Smithsonian, and the basketry and bones on display at the Nevada State Museum and other museums in the area.

Setting aside the question of whether or not they were actually large enough to be considered “giants”, what is especially remarkable about this story is that it’s an example of solid archaeological evidence that was turned up and scientifically analyzed to essentially confirm the legend that Paiutes elders told tribal children for years.

Confirmation of legends through science like this is rare, but whether or not they were giants, it can be said that an as-yet unrecognized tribe of somewhat large, red-headed humans used to live in Nevada for over a century before they were eradicated from this continent by tribal war.

Where they came from – we may never know.