China Wages War on Religion – Calls it a Disease Part 1 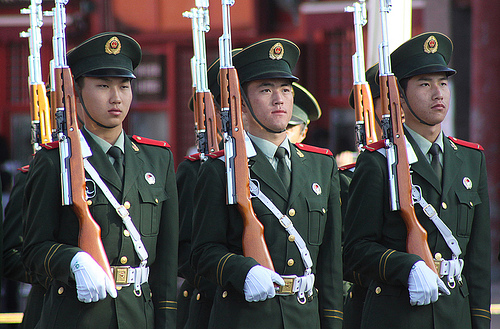 In what can only be described as Orewellianism at its greatest, the Chinese communists are cracking down on religion and have issued a screed calling for the elimination of Christianity and foreign religions which it has deemed unhealthy. (1) What is worse, the communists have taken a page from the Nazis and vowed to “Purify the social environment related to religious factors.”

What this means is that the atheistic communists are removing all vestiges of foreign – read as “non communist sponsored” – forms of worship. (2) This religious witch hunt has the blessing of the highest members of the communist party and seeks to target universities both foreign and domestic.

The communist leaders have called religion a “disease” which must be eliminated and supplanted with communist/Marxist teaching and ideology. (3)

While China is home to 105 million Christians, (4) these people are not allowed to worship as they see fit. Sitting atop every religious organization is the long arm of the communist party. (5)

China’s latest crackdown on human rights shows how strict control on China’s 1.3 billion inhabitants is being ratcheted up amidst fear of violent overthrow.
This article documents the latest news in China’s war on religion and why we should care.


At War with Religion

It was recently reported that the Chinese communists are at war with religion and targeting US churches and people of faith. (6) This action should come as little surprise when one considers China’s brutal history against the freedom of religion.

“Under the Communists, many temples, churches and monasteries have been converted into archives of the state, museums, hospitals, schools, and insane asylums.” (7)

What is surprising, however, is that while many are calling for China to advance vis-a-vis rights and tolerance, they seem to be reversing their course. In their latest attack on religion, China has declared that instead of China’s youth filling their heads with notions such as God and love, that they would be better served by focusing on communism.

A recent report by ChinaAid.org has translated an 18-page screed commanding the communists to be wary of foreign religions and to take every precaution necessary to stem the flow of religious thoughts and ideals. (8) As a substitute for the “evils of religion” the Chinese have demanded that universities:

“Make education in Marxist atheism the foundational work in resisting infiltration and preventing campus evangelism, enrich content of classes on ideological and political theories and related classes, and reinforce propaganda and education in various ways.”

Media control and “brainwashing” are deeply rooted in the Chinese communist system. (9)

Chairman Mao was a master manipulator who used propaganda to move and control the masses. This long held tradition is still alive and well even 34 years after Mao’s death.

Due to governmental control of the media, Beijing leverages the media to turn public opinion against its enemies and to drum up support for its programs. Its influence is so wide spread that “the Central Propaganda Department of the Chinese Communist Party (CCP) has a central, guiding, role over the whole of Chinese society in the current era.” (10)

In a recent example of China’s propaganda gone wrong, Beijing has come under fire for mandating “patriotic education” in all Hong Kong schools. Hong Kongers take exception to this “education” calling it shameless propaganda. (11) They point out how this training frequently decries the West – typically the US as a nation of folly and derision, while calling the communists “progressive, selfless and united”. (12)

People from Hong Kong resent that such ideals are being drummed into the heads of children as young as 6 and 7.

Since the death of Mao, China has had little to believe in. Under Mao’s leadership, the Chinese were determined to kill off the “evil capitalists” and their ills. (13)

Mao created a sense of pride and purpose and united a backwards country filled with tyranny and despair. The problem is that those times are long gone.
The modern-day communists not only lack revolutionary roots but street cred as well. The people do not believe in nor trust the communist leaders. As a matter of fact, a recent poll showed that more Chinese trust prostitutes than they do members of the communist party. (14)

Nepotism, bribery and opaque governance has taught the Chinese to question not only the communist mandates but the system itself.

Absent revolutionary zeal, the Chinese are looking for something to believe in, and it’s got the communists in a panic.

The problem is that the communist regime was built upon struggle and conflict which has served them since its inception. China’s leaders grew up and thrived in what has to be one of the most tragic events of the 20th century.

In a ten-year period from 1966-76 (15), as many as ten million Chinese killed one another to prove their love for Mao. (16) This has led to a moral vacuum in the Chinese leadership. In place of love for their parents or a higher power, China’s leaders were taught to trust in the party and nothing else.

It is this lack of a moral compass that has led to much of China’s ills over the past few years and since its creation. Apart from this China has a history of violence and enjoyed only 500 years of peace over the past 2500 years. Revolution and overthrow have been the norm in the middle kingdom.