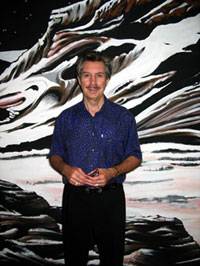 On January 11th, NASA issued a press release that the agency had awarded a $17.8 million contract to Bigelow Aerospace to build a “new addition” to the International Space Station. (1)

The expansion to the Space Station is of course to further “technology for future exploration”, but the news release also notes that another benefit of the expansion is to explore the benefits of the space habitat for “commercial space endeavors”.

According to the 2013 budget estimates for NASA, the agency is asking the Obama administration for $17.7 billion in funds from the U.S. government “to continue implementing all major elements of the NASA Authorization Act of 2010, thereby laying the foundation for remarkable discoveries here on Earth and deep in space.”

The message from the NASA administrator claims that the proposed budget is for NASA to implement a “National Laboratory” in space, in the form of expansion and upgrade of the International Space Station (ISS). (2) However, what the proposal doesn’t clearly specify is that NASA intends to use taxpayer funds to assist private companies in testing and developing their own commercial products.

In bringing Bigelow Aerospace into the picture, and in allowing Bigelow to utilize taxpayer funds to perform functional testing of the Bigelow space habitat, the agency is essentially using American taxpayer resources to assist a private company in bringing its product to market.

When it comes to developing cutting edge technologies in space that take the safety of human beings into account, it is important to know that you can trust the developers and manufacturers of that technology.

While cutting edge science requires a certain degree of eccentricity – the ability to think outside the box to some degree – the production of safe, functional technologies requires an adherence to sound scientific principles.

When it comes to Bigelow Aerospace, the company itself is owned by Robert Bigelow – a figure that both skeptics and believers in Ufology circles consider to be a person with questionable integrity.

In 2010, Dr. Richard Boylan – an extremely controversial and fringe promoter of things like “Star Kids” and a self-described “star-cultures Antropologist” – published a list of Ufology personalities titled, “The Good, The Bad and the Ugly”. In the list, he organized well-known personalities throughout the UFO community as either one of the “Good Guys” or one of the “Bad Guys”.

Bigelow as a Ufology “Bad Guy”

To be completely truthful, being listed as a “bad guy” on any list created by someone promoting such delusional beliefs as Dr. Richard Boylan isn’t really such a bad thing. However, many sane journalists and observers inside and outside the UFO community question Bigelow’s true intentions.

In a June 21st, 2010 update in her column “The Devil’s Hammer”, writer Victoria Alexander – a friend of Bigelow’s – was invited to Las Vegas to actually visit Bigelow Aerospace. She described the factory in the following passage.

“At the Bigelow Aerospace factory here, the full-size space station mockups sitting on the warehouse floor look somewhat like puffy white watermelons. The interiors offer a hint of what spacious living in space might look like.”

The company hopes to have its own private space station available for paying customers to visit – essentially a hotel orbiting the planet Earth. It’s a dream that makes sense for Bigelow, considering that he built his fortune from the Budget Suites of America hotel chain he funded. Apparently we will now have a Budget Suites in space.

Bigelow told Alexander that there was virtually no competition on the horizon when it came to commercial human habitats in space. (3)

The truth about Bigelow’s belief in space aliens visiting Earth finally came out publicly in a big way when he revealed to the NY Times in 2010 that his interest in space includes much more than just building a commercial space habitat.

He also reveals that he is a through-and-through believer in people who claim to have personal encounters with space aliens.

“I’ve been a researcher and student of U.F.O.’s for many, many years. Anybody that does research, if people bother to do quality research, come away absolutely convinced. You don’t have to have personal encounters.”

Apparently, this expert Ufology researcher has discovered enough proof to convince himself that aliens have killed human beings, but apparently it hasn’t quite made the news yet.

Alrighty then. Are you prepared to stay overnight in an inflatable spacecraft, orbiting high above the planet Earth, owned by this guy? 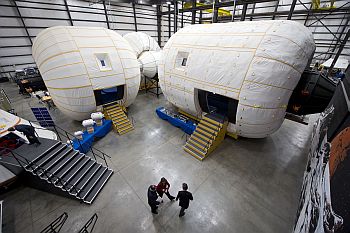 Up until now, Bigelow simply worked with other companies like Boeing and Lockheed Martin, which had won NASA contracts. Bigelow was able to use some of the $18 million that NASA had awarded to Boeing to do work on the design of a commercial crew capsule.

The irony is that after Congress stopped funding TransHab in 2000, it is now indirectly sending taxpayer money to a project that is essentially the reinvented version of TransHab technologies and NASA patents. (4)

If NASA continues down this path, Bigelow Aerospace will be propelled down this path – and humans will likely see the arrival of a sort of “Budget Suites” in space within the foreseeable future.

My one remaining question is this; If Robert Bigelow truly believes that Earth is being visited by hostile space aliens that are killing people, why would he want to place Earth-bound humans into Earth’s outer-orbit, where they would be presented to those aliens like dinner on a silver platter?