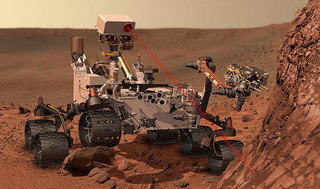 Currently, the Curiosity rover is cruising around Mars collecting and beaming volumes of data back to Earth.

When the Mars Science Laboratory successfully landed on the Red Planet, it was one of the most celebrated space exploration events since the Apollo Moon Landing.

Even though this is an impressive achievement for science, the beginning of the project came at a very curious time.

NASA has had its eye on Mars for some time; however, it came at a somewhat questionable time in NASA’s history. It appears that NASA made a hard push for the Red Planet attempting to beat out the Russians to the punch. Does all of this point to a reignited space race with the finish line located on Mars?

The Americans nearly lost the race in 2011 when the Russians successfully launched the Phobos-Grunt spacecraft. Even though the orbiter was heading for Phobos, an asteroid-like moon of Mars, and not the planet itself, the project would have tightened Russia’s grip on space exploration.

The project began in 1996 when no other country was really working toward Mars, but it took more than a decade to take the project from paper to practice. (1)

The project went into active development in 2008. It seems the project was fast-tracked because by 2011, the Russians were ready for launch. The orbiter was launched on November 9, 2011, however, it never made it out of Earth’s orbit. The spacecraft’s rockets that were intended to push it towards Mars failed. Barely even two month later, the orbiter crashed back to Earth. (2)


Window of Opportunity for NASA

The Russians’ misfortune seemed to leave a window of opportunity for NASA and their Mars Science Laboratory project. However, NASA’s project timeline uncannily mirrored that of the Phobos-Grunt project.

NASA selected eight experiment proposals in 2004 and by 2008 testing of the Mars Science Laboratory was well underway. (3)

Initially, NASA was on tap to launch the rover nearly two years before the Phobos-Grunt launch. However, due to testing issues and redesigns, the Mars Science Laboratory was delayed until 2011. (4)

The mission was successfully launched on November 26, 2011. Unlike the Russian project, NASA’s project made it out of Earth’s orbit. Nine months later, the Mars Science Laboratory landed on the surface of the planet; an achievement that reestablished America in space exploration.

Even though the Russian and American projects did not have the exact same timeline, the two were close enough to make many people wonder if a race to Mars was underway during the early 2000s. Even the ultimate goals were similar in that Phobos-Grunt was to obtain soil samples from the Martian moon while the Mars Science Laboratory’s objective is to study the soil, water, and climate of the planet to study and determine the overall inhabitability of Mars.

With two projects so similar in the works by two countries who were competing in a space race only four decades before, and barely two decades after the Cold War, it seems a little farfetched that it was all just a coincidence.

Whether the Martian space race started with the Phobos-Grunt project can be debated. However, with America now exploring the surface of Mars, one thing is certain. The world is currently under a modern-day space race.

America may be the first to send a rover to mars; it has yet to put a man on the Red Planet (a fact that has not gone unnoticed by the Russians).

Currently, the Russians are planning a manned mission to the moon in search of water by 2015. They are also designing a new space rocket that is slated to be in use by 2020, an obvious push to compete in the present-day space race.