The Corrupt TSA – How Bad Is It?

In 2012, the Committee on Oversight & Government Reform published its findings about the TSA (Transportation Security Administration). Not only were the findings shocking, they set off alarms throughout the government and the Nation.

The Committee’s May 9, 2012 report titled Airport Insecurity: TSA’s Failure to Cost-Effectively Procure, Deploy and Warehouse Its Screening Technologies gave a startling insight to the corruption and negligence of the agency assigned the duty of securing the nation’s airports.

Even as late as February 15, 2012, the TSA was still storing “approximately 5,700 pieces of security equipment in warehouses at TSA’s Transportation Logistics Center (TLC) in Dallas, Texas”.

The Committee reported that this stockpile of equipment was valued at $184 million, yet “when questioned by Committee staff, TSA’s warehouse staff and procurement officials were unable to provide the total value of equipment in storage”. In addition to this cost, the “annual costs for leasing and managing the TLC (Transportation Logistics Center) are more than $3.5 million”. (1)

Some of that stored equipment was “472 Advanced Technology 2 (AT2) carry-on baggage screening machines”. 99% of this equipment had been stored longer than nine months and 34% had been in storage more than one year.

Not only was the equipment not being used in airports as designated, it was depreciating in value and resulted in a cost of $23 million taxpayer dollars. Failure to direct ship equipment from the manufacturer created an “excessive annual deployment costs of between $50 million and $100 million”.

Careless spending was also cited for the TSA purchase of Explosive Trace Detectors (ETDs) in order to buy at a bulk rate, although there was no need for the devices, only an “incorrect and baseless assumption that demand would increase”. The total cost of the ETD purchase was $44 million. 492 ETDs have been stored for over a year. The TSA was unable to provide the committee with a ETD deployment plan.

The TSA delayed the Congressional Oversight Committee and “provided inaccurate, incomplete, and potentially misleading information to Congress in order to conceal the agency’s continued mismanagement of warehouse operations”. (1)

–> TSA willfully delayed Congressional oversight of the agency’s Transportation Logistics Center twice in a failed attempt to hide the disposal of approximately 1,300 pieces of screening equipment from its warehouses in Dallas, Texas prior to the arrival of Congressional staff.

–> TSA potentially violated 18 U.S.C. Sec. 1001 by knowingly providing an inaccurate warehouse inventory report to Congressional staff that accounted for the disposal of equipment that was still in storage at the TLC during a site visit by Congressional staff.

–> TSA provided Congressional staff with a list of disposed equipment that falsely identified disposal dates and directly contradicted the inventory of equipment in the Quarterly Warehouse Inventory Report provided to Committee staff on February 13, 2012.

–> “TSA staff and warehouse management were unable to provide the exact quantities and locations for equipment in storage.” 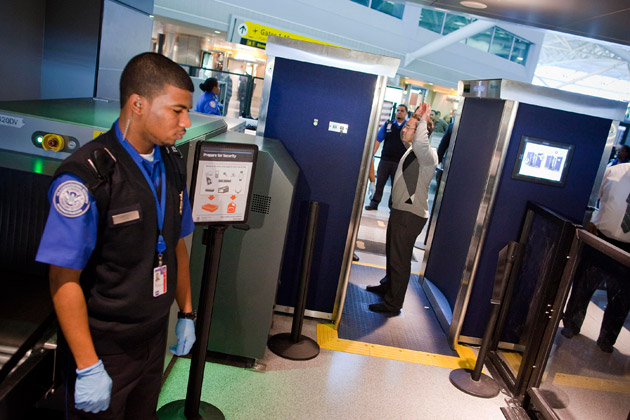 “At least five incidents from February 2011 to July 2011 in which on duty screeners took payments of up to $2,400 to allow suitcases filled with drugs to pass unimpeded through X-ray machines at LAX.”

A careless “member of the alleged conspiracy accidentally went through the wrong security line and was busted by TSA screeners who were not in on the plot.”

In an unrelated incident, “a TSA screener unknowingly arranged with a confidential source for the Drug Enforcement Administration (DEA) to receive $1,200 for a shipment of methamphetamine to pass through security”. (2)

Catherine Herridge with Fox News (3) reported on some of the TSA criminal behavior the Senate heard about that included:

–> An Orlando International Airport TSA officer was responsible for stealing over 80 laptops and iPods that passengers had thought were securely stowed away in their luggage. The officer was “convicted on embezzlement charges”.

In September 2012, convicted TSA Officer Pythias Brown told ABC (4) that he was “part of a ‘culture’ of indifference that allowed corrupt employees to prey on passengers’ luggage and personal belongings with impunity, thanks to lax oversight and tip-offs from TSA colleagues.”

Brown stole over $800,000 of various electronics and other items during a four-year period. He was aided by fellow TSA personnel at luggage and security checkpoints. Brown blames his own complacency for his final undoing. He carelessly placed the stolen camera of a CNN producer on E-bay without removing all of the CNN stickers.

What makes this story so compelling is the culture of the involved TSA employees and how they work together like a ring of thieves.

Between 2003 and 2012, nearly 400 TSA officers were fired on charges of stealing from passengers.

Some thieves boldly lifted large sums of cash from luggage, including $40,000 from one passenger and $30,000 from another. One TSA agent stole a passenger’s wallet from his jacket as he went through the security sweep.

Republican Representative John Mica from Florida, who is also the Chairman of the House Transportation Committee said, “TSA is probably the worst personnel manager that we have in the entire federal government. It is an outrage to the public and, actually, to our aviation security system.” (4)

Until the TSA tightens its control over hiring practices and personnel screening with due diligence and enforces higher standards of personnel work ethics and character, the oversight of its own security will continue to threaten that of the American public that’s dependent upon air transportation.