What Ever Happened With The Shiny Particles on Mars? 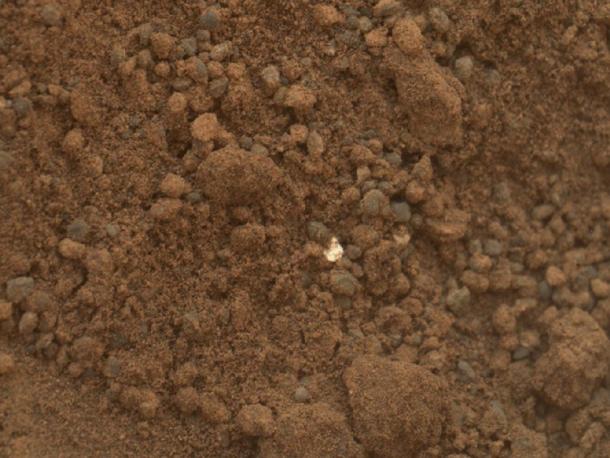 The Mars rover, Curiosity, is currently exploring the Martian surface and is even drilling into the planet to study what lies beneath the top layer of Martian dust.

Most recently, NASA reported that Curiosity discovered several veins of calcium deposits. These deposits have scientists excited because they are quite similar to the calcium we find on earth when water flows through the cracks of rocks. (1)

However, there is a similar find that seems to have been swept under the rug. Back in October, NASA reported on the discovery of shiny particles found in the soil of the Red Planet. Even though some theories were reported, NASA never really explained the particles definitively. Moreover, all reports of the shiny particles haven stopped leaving many to wonder, “What ever happened with the shiny particles on Mars?”

When a shiny object was initially discovered, NASA immediately determined that it was something that fell off of the rover itself; therefore, not native to the Martian landscape.

The object was determined to be a piece of plastic from the rover.

“We can’t rule out that they’re something man-made but we don’t think that they are.”(2)

So, if it was not from the rover, then what are the particles?

However this theory raised even more questions; such as: What is the process that breaks it down? What type of mineral is it? Are there any larger samples of the mineral present on the planet?

NASA really does not have the answers to any of these questions. The Jet Propulsion Laboratory simply said:

“We will finish determining whether the spacecraft material warrants concern during future operations. The native Mars particles become fodder for the mission’s scientific studies.”

Which begs the question, why is this unknown material quickly being labeled as “fodder” by NASA and no other research findings have been made on it?

Well, there are three plausible answers to this question.

The first possible answer is that NASA does not know what it is.

The first three scoops taken by the rover were being used to just clean the ChemMin to void it of any earth-originating residue. The fourth scoop was to be analyzed. However, no results were ever reported.

Therefore, a plausible conclusion is that the ChemMin did not provide conclusive results.

The second plausible answer could be that NASA does know what it is, but the results are so unimpressive that it would not live up to the hype surrounding it.

NASA is known for its research let-downs. For example, the shiny particles very well could just be particles of silica.

That could be seen as an unimpressive find because silica is the most abundant mineral on earth. The mineral contributes to nearly 30% of the earth’s weight. Finding it on Mars is almost expected.

The third plausible answer is that NASA knows exactly what it is and is keeping a secret for some reason.

The mystery particle could have profound implications here on earth.

Personally, I find that the third answer to be the least likely of them all. Either NASA has no idea what it is and is simply laying low about it until most of us forget about the shiny particles or the particles are so common and mundane that NASA is embarrassed that it made such a big deal out of the find in the first place.