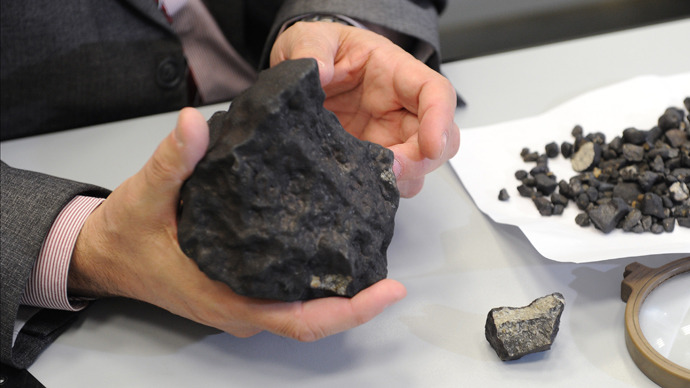 On Friday, February 15, 2013, a meteor streaked through the sky and exploded over the Ural Mountains in Russia.

The explosion had the power of an atomic bomb, with sonic blasts so deafening that it shattered windows in the vicinity. What is said to be the largest explosion of its kind in more than a century injured approximately 1,100 people.

The blinding flash of light and deafening noise naturally frightened many Russians, with some elderly women believing the world was coming to an end.

The meteor has been estimated at 49 feet wide and weighed about ten tons. Russian Academy of Sciences said in a statement that the meteor entered the earth’s atmosphere at a hypersonic speed of at least 33,000 mph and exploded into pieces at approximately 18 – 32 miles above the ground. (1)

The incredibility of this rare cosmic event was made even more inconceivable by the fact that it hit less than 24 hours before Asteroid 2012 DA14 passed earth by just 17,150 miles, making it the closest recorded pass of an asteroid to the earth.

Despite some initial speculation that our planet is passing through a swarm of asteroids, scientists widely agree that the two chilling cosmic incidents were not connected since the asteroid and the meteor appeared to have been traveling in opposite directions. As Paul Chodas, a scientist with NASA’s Near Earth Object Program, said:

“There is no relation there. It seems like we’re in a cosmic shooting gallery here. There were two very rare events happening on the same day. Pure coincidence. (2)

However, the recent meteor event has been related to the Tungaska event of 1908, as Dr, Chodas highlighted:

“This is the largest recorded event since the 1908 Tunguska event.” (2)

On June 30, 1908, a huge explosion occurred not far from the Podkamennaya Tungaska River in Siberia. What was believed to be an asteroid, flattened millions of trees over 800 square miles in a remote area of central Siberia which was largely uninhabited, about 1,200 miles away from Friday’s event.

The uncanny similarities between the February 15 explosion and the Tungaska event, namely the sheer scale of the cosmic events and the proximity of where they hit the Earth, certainly shed some scientific light on the 1908 event.

One uncertainty of the Tunguska event was whether the object that exploded on earth was actually an asteroid or a comet.

While it was generally believed to be an asteroid, in 1930, the British astronomer, F.J.W. Whipple suggested that the Tunguska object was in actual fact a small comet. Whipple exerted that a comet, which is composed predominantly by dust and ice, could have been vaporized by the impact of the atmosphere of the earth, which would explain why no obvious traces were left.

Whipple’s comet theory was supported further by the fact that “glowing skies” were observed in Europe several evenings before the event took place.

According to a paper titled “Asteroid and Comet Bombardment of the Earth”, author Eugene Shoemaker asserts that the glowing skies that were witnessed prior to the Tunguska event could be possibly explained by the ice and dust that had been dispersed from the comet while it was in the upper atmosphere of the earth.

Another less scientific and rather more farfetched explanation surfaced regarding what caused the Tunguska event.

Russian researcher Yuri Lavbin has spent the best part of 12 years studying the “Tunguska meteorite” mystery and believes that a comet colliding with a UFO ten kilometres above the earth’s surface caused the 1908 explosion in Siberia, claiming that he found debris from the extraterrestrial space ship. (6)

Reiterating the claim that the Tunguska event was in fact a comet and not an asteroid was the Slovak astronomer Lubor Kresak, who, in 1978, claimed that the Tunguska comet body was a fragment of Comet Encke, a periodic comet that completes a full orbit of the sun once every three years.

Kresak based his theory on the fact that Comet Encke is responsible for the Beta Tuarid meteor shower, of which the Tunuska event coincided with. (4)

The February 15, 2013 event does however provide evidence that disputes the claims that the 1908 Tunguska explosion was caused by a comet rather than an asteroid. According to Bill Cooke, leader of the Meteoroid Environment Office at the Marshall Space Flight Center in Huntsville, the orbital path of the meteor showed that it was an asteroid, not a comet. (2)

The fact that these two enormously powerful cosmic explosions occurred in such close proximately to one another suggests that the two asteroids took a similar orbital path and that the 1908 object was indeed an asteroid and not a comet.

Another uncanny similarity between the recent rare extraterrestrial activity occurring on earth and the 1908 Siberia occurrence was that the latter was caused by an object the similar size of the 2012 DA14, the asteroid which flew painfully close to earth just hours before the meteor struck the Ural Mountains in Russia on February 15. As Universe Today states:

“The Russian meteor is the largest reported since 1908, when a meteor hit Tunuska, Siberia. Oddly enough, the Tunguska event was caused by an object about the size of 2012 DA14.” (5)

While the Russian meteor explosion does not explain the Tunguska event of 1908, its similarities certainly shed some light on what caused the gigantic explosion in Siberia in 1908 and shrouds even more dubiousness on the claim that a UFO colliding with the Tunguska comet had caused the explosion.