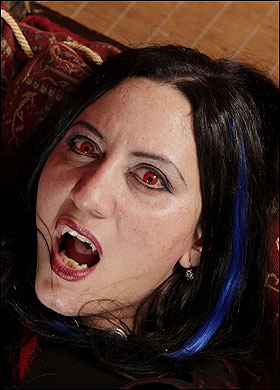 It’s not a Twilight movie set or a fantasy party; it’s a lifestyle choice for many people – specifically female vampires – in the United Kingdom.

Unlike their fictional counterparts, real female vampires are not immortal. In fact, they are ordinary people that you might pass on the street or who might even live in the flat next door to you.

Most lifestyle vampires keep that part of their lives private. In fact, according to one female vampire interviewed and featured in The Sun, many high society people indulge in this lifestyle.

Authentic vampirism is not for the faint hearted or the delusional wanna-bes who romanticize being like the vampires in movies.

These female vampires have feeder partners who allow them to drink their blood. Some even use a set of ceramic fangs to get into the mood and pretend they are in fact, fang sucking vampires. These aren’t just bloodletting samplers, these women are serious about their lifestyle choice and suck blood from their partners’ necks, arms, legs and well, wherever they mutually agree on a regular basis.

Respecting another person’s lifestyle choice can often be difficult for those who live completely opposite lifestyles. Perhaps that’s why these modern day vampires choose to have private vampire parties.

According to The Sun, there are over 3,000 practicing vampires in the UK alone and the numbers are growing. Perhaps this growth is due to popular books and fiction that depict vampires as romantic angst immortals. Or, perhaps the lifestyle offers something less tangible to those thirsting for blood.

Whatever the psychological reason these women opt for a bloody lifestyle, they join their fellow bloodletters once a month for a blood drinking party. These “get-togethers” are supervised by masked vampires simply known as “The Elders”. (1)

This isn’t just a perfunctory title, the Elders weed out the mentally disturbed and even match members up with willing feeders. They also give instructions to novices on how to feed.

The members of the private parties are vetted via a psychological test and must be medically declared clean of HIV, STI and hepatitis. As a safety measure, there’s always a medical professional, also a vampire, on site.

In a society that is very cautious about being exposed to HIV blood, this lifestyle seems the epitome of contradiction to the modern reaction to blood.

Pyretta, a female vampire since the age of 15, stated that feeding on the blood of her partner made her feel, “completely reborn and energized”. She slept in a coffin until back problems made her determine a casket was her next upgrade. (1)

This late 30s expat from New York, NY is a volunteer worker, but hasn’t revealed her vampire nature to her co-workers. She’s especially sensitive to the disabled children she works with and doesn’t want to risk scaring or possibly traumatizing them. To look at her, you’d never suspect that Park embraces a Goth lifestyle, much less that of a vampire.

But, not all female vampires attend blood drinking parties. In fact, some like Suzie Park only reveal their vampire nature at night. She does all the normal everyday things that most humans do, but at night, she’s quite different. Twice a week she drinks human blood, and several times a week she goes to sleep inside her antique coffin.

Her husband, although into the Goth scene, isn’t a vampire and much to her lamenting, there’s not enough room in her coffin to share that with him. The coffin does have an added sleep benefit since it does “block out the sound of his snoring”.

In a 2009 interview with The Sun, Susie explained how she was introduced to the vampire lifestyle in 2003 by a man called Lord Sebastian. In The Sun interview she said, “All my life there was something missing, an itch I couldn’t scratch.” (2)

She revealed that real vampires didn’t evolve until the 1980s as part of the “punk movement”. These are humans who drink human blood. They aren’t fictional vampires that are immortals with fangs and go around biting humans. She also comments that there are quite a few vampires living in the UK.

Lord Sabastian introduced her to his cult of vampires, House of Exmortal. They taught her how to be a human vampire. It was a secret world that she was bound by oath to keep.

She described her first taste of human blood as “another step on the road to becoming a fully-fledged vampire.” (2)

The warm metallic tasting blood was from her mentor, Lord Sebastian, and drinking it made her feel, “ a rush of euphoria” and as though it had restored her. Two years later, Lord Sebastian was killed in an accident and the cult disbanded. (2)

She later met her now husband in a Goth Internet chatroom and eventually moved to the UK to be with him.

Suzie doesn’t drink other people’s blood. Instead, she drinks her own blood. She does often dress the part of vampire by wearing professionally made fangs by a fangsmith and red contact lens. But, come sunlight, she doesn’t burst into flames. Instead, she gets dressed and goes off to work with disabled children.

In 2003, The Guardian published an article about a vampire-inspired crime and discussed:

“In cities throughout the UK, vampire societies meet on a weekly basis and act out scenes from their favorite movies.”

The article further reported that vampirism was a youth cult that was growing very rapidly. (3)

One commonality that Pyretta and Suzie share is their teenage infatuation with vampire lore. Perhaps vampirism in its most docile non-violent existence bestows to those like these women a sense of power and belonging to something greater than themselves. Perhaps this lifestyle has less to do with psychological reasons and more physical ones, such as the craving of blood.

Such cravings can be taken to the extreme as in the case of the American woman, Michelle, featured on the TLC channel series, My Strange Addiction. Michelle’s addiction had driven her to consume one liter of pig’s blood every day. (4) Obsession or not, it’s a fact that there are many females in the UK and around the world practicing a female vampire lifestyle.