The Brain Control Experiments of Jose Delgado and His Stimoceiver

Spanish born Jose Delgado’s name is synonymous with mind control experiments. His research was mentioned in the MKUltra hearings in 1977 that were held by the US Senate.

MKUltra experiments were carried out at “80 institutions, including 44 colleges and universities, as well as hospitals, prisons and pharmaceutical companies”.

These experiments were all aimed at various aspects of mind control. Delgado’s nearly twenty years of research was alleged to be part of this CIA operated program that officially ended in 1973. (1)

Delgado, who died in 2011, held a doctor of medicine degree in Spain, but in1946 began his fellowship at Yale University. In 1950, he was offered a professorship in physiology and went on to explore the brain and how to control it via FM frequencies. (2)

His experiments were first performed on cats, then advanced to primates during his time at Yale in the 1950s and 1960s. The device he created to stimulate and control emotions and physical responses was dubbed the “stimoceiver”.

This device sent FM frequencies to the electrodes he implanted in the animals’ brains. The radio waves were transmitted from the device to the implanted electrodes. The stimoceiver allowed him to stimulate various regions of the brain which in turn gave a desired response.

In one advanced experiment, Delgado implanted electrodes in several male apes and one female ape that was in the lowest social position within the group. After training the female ape in how to use the device, she voluntarily controlled the male apes at will.

Delgado’s stimoceiver allowed complete control over the primates. In an effort to demonstrate his science could control rage, Delgado implanted electrodes into a matador bull’s brain.

First, the matador taunted the bull. After several minutes of the bull charging the matador, Delgado stepped into the ring, armed only with his remote control receiver.

He stood in front of the animal so it would charge at him. Each time the bull attempted to charge, Delgado would press the remote control button and the bull would stop in his tracks and turn away. Delgado demonstrated this control several times in the video footage. (3) 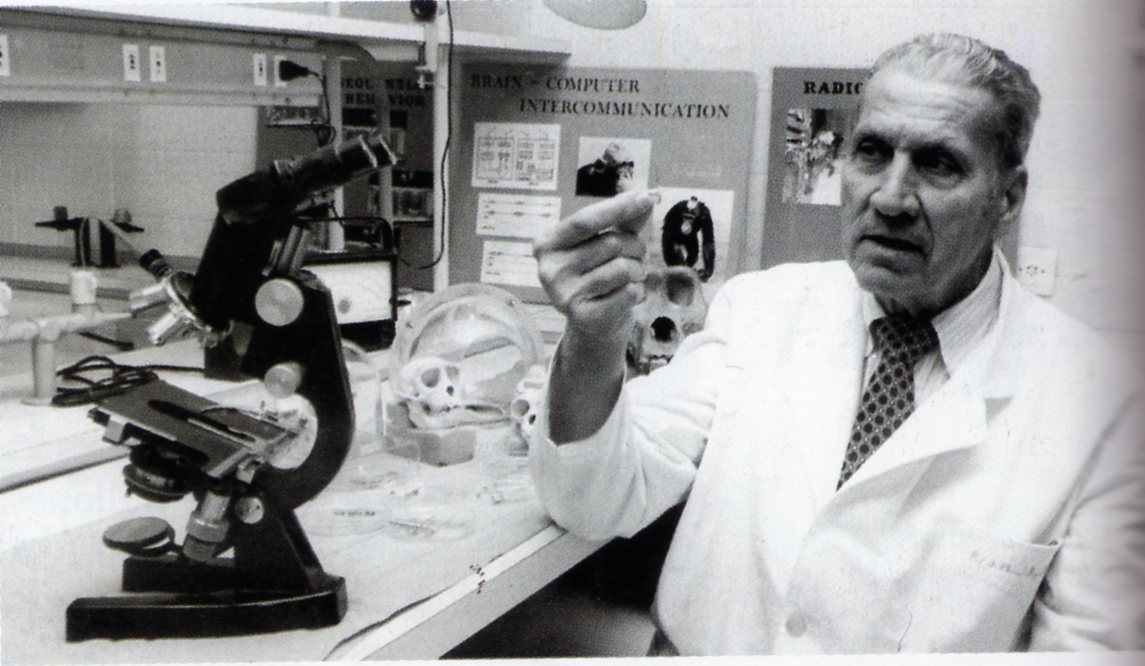 It was clearly just a matter of time before Delgado’s research advanced to human experimentation that was argued as therapeutic in nature. The test subjects were mentally ill and it was believed that Delgado’s research was their last hope.

Delgado’s point-of-view on his research was precisely expressed in the 1965 New York Times interview that quotes one of his Yale lectures.

“I do believe,” he said, “that an understanding of the biological bases of social and antisocial behavior and of mental activities, which for the first time in history can now be explored in a conscious brain, may be of decisive importance in the search for intelligent solutions to some of our present anxieties, frustrations and conflicts.” (4)

Perhaps it was his statements that helped propel the various conspiracy theories that cropped up about his work. Maybe it was the fact that human mind control experimentation had been conducted at all. Then again, it might have been the fact that his research was funded by the military in hopes of weaponizing the technology.

Ultimately, after the MKUltra hearings shed more light on Delgado’s research than was desirable, he was plagued with lawsuits by individuals who felt he’d experimented on them against their will.

He retreated to Spain, taking a job with the government to start a medical school at the Autonomous University of Madrid. (5)

He continued his stimoceiver mind control research. It’s said that he experimented on himself and family members. In 2001, two Stockholm writers arranged to visit with him in Spain and found him to be feeble and moving in and out of periods of lucidity. When they asked when he’d ceased the stimoceiver experiments, he responded that he had not stopped. (6)

They questioned him about his involvement in Pandora, a CIA operation undertaken in 1962 after the discovery that the Russian military was bombarding the American Embassy in Moscow with microwaves. The journalists believed that Delgado’s research into electro-magnetic radiation had been part of Project Pandora, but he denied any such connection.

When their questioning turned to human experiments, they reported that Delgado quickly explained that all of his work with humans was for therapeutic reasons. (6)

He did display the attitude that his experiments had not given the kind of results he desired and commented that scientists were not able to fully understand the interaction of the brain and emotional and physical responses since they were so wide and varied.

There is one quote attributed to Delgado that haunts the minds of those fearful that such mind control is in fact possible and is still going on.