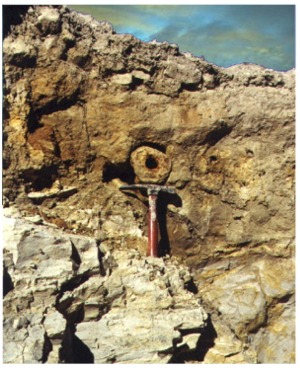 Rockwall, Texas was named for a mysterious rock wall. What makes the wall so mysterious is that no one knows who built it. The wall is surrounded in controversy as archeologists and geologists choose sides.

While many of the geologists who have examined and studied the wall claim it’s a natural phenomenon, they can’t explain scientifically how such a wall could have formed naturally.

At one time, part of the wall that reportedly had an arched doorway or window was a tourist attraction. The family charged a quarter to view their portion of the wall that they’d unearthed. There were reported outcroppings of the wall. In cases, the exposed wall portions were two to three feet high.

The wall was first discovered in the mid-1850s, when RF Canup was digging a well. Eight feet down, he struck a wall and eventually dug out nearly 100 feet of it. He and most townspeople believed the wall was the ruins of an ancient structure. (1)

In 2012, there was a renewed interest in restoring the mysterious rock wall and bringing it into a new realm of tourist destination, but even that plan was controversial and quickly died.


What’s Known about the Wall

–> First discovered during the 1850s when a landowner was digging a well.

–> The rocks are feldspar granite, not a natural find for that area.

Anomalies in the Wall

Two metal rings or spheres 6” and 10” in diameter are embedded in the stones. They are made out of tin, titanium and iron. Who made these rings? What purpose did they serve?

There are various excavation accounts retold by the town’s founding families of “cubicles or rooms constructed of stone which you could walk through and would reach a corridor which seemed to run in a direction into the hill that the town square sits above”. (1)

Stories of a hidden room filled with gold inspired several men to undertake secret excavations. During one such incident, two men claimed to have unearthed a corridor with a Gothic arched ceiling. Fear of structure instability and possible collapse chased them away.

Another description told how the outside wall went straight down, but inside, the wall descended 40 feet in an inward curve that was much thicker than the exterior wall. (1)

In 1886, an article ran in the Rockwall Success newspaper that a man, Ben Burton, had discovered not just human artifacts but the skull of a giant, reported to be the size of a half bushel basket. The writer conjectured that the giant would have weighed 1,000 pounds.

The three men who’d descended into a rock cavity also discovered a “60’ x 100’ chamber” with a ceiling height of 40 feet. They recounted how the slate ceiling was held up by polished black marble pillars. The men claimed that an eerie voice yelled for them to get out and a bird or bat flew at them. The last part of the story is what many feel is a tongue-in-cheek attempt to let the reader know the story is made up.

There’s no skull or any other artifact to back up this particular story, so it remains unknown if the newspaper account was a spoof or a factual report since the author invited readers to come to his office to view the skull. (2)

In a YouTube video shot in 1998 of an excavation site, a group of investigators, including a geologist and mechanical engineer discuss their research and excavation of the mysterious rock wall.

The main spokesperson discusses how the outside of the wall goes straight down, but inside, it continues some 30 to 35 feet and curves inward (similar to other reports). He remarks that the design suggests a buttress effect. (3)

He comments that one geologist present and two others have confirmed that the stone is feldspar granite and doesn’t belong naturally in the geological setting. He states that even if the weird formation proved to be a natural formation that it had also had many man-made features.

He further reveals that the stone wall had been covered up with “80 million year old soil”. This suggests that the wall had not been disturbed prior to the excavation. Does this imply that the rock wall is as old as the dirt that buried it?

The geologist identifies a stone sample he took from the top of the wall and identifies it as man-made pure concrete absent of sand. The sample also has parallel striations that resemble a trowel.

There is also a mention of some form of writing they’ve discovered on the wall, but nothing else is mentioned in the video.

This only creates more unanswered questions. Another unique feature that the stone wall has is a “high permanent magnetic property”. Again, the significance of this isn’t given.

There is no further information available about the video beyond an accompanying brief summary. The video ends abruptly as though it’s a segment of a much larger video. The website link for the video is no longer functional.

In the YouTube comments section, several people who live in the area posted that the excavation site had been filled back in and a Walmart shopping center built on top of it. Several stated that a portion of the wall is still visible in the back part of the shopping center.

Is It a Natural Phenomenon?

When exploring such unique mysteries, it’s difficult to know what is authentic information, hearsay or hoaxed.

The raw footage of the excavation site discussion appears genuine and compelling. If posters are correct and the excavation site was covered back up with shopping center built over it, then what happened to derail what seemed to be an earnest investigation?

Perhaps the findings proved that the wall was nothing more than a natural phenomenon or it could be that the truth was literally covered up.

A few facts do remain. The wall was definitely discovered in the 1850s and everyone in the town was aware of its existence. It appears that several townspeople were curious and set out to conduct their own excavations.

One family charged a quarter for tourists to view their portion of the wall. But, for whatever reason, attempts made to discover the truth about the wall never produced more than a few stories about what excavators found without any artifacts preserved.

Present day town residents don’t seem interested in excavating or investigating the wall further. Until a serious scientific excavation is undertaken, it seems that the mystery surrounding the Rock Wall will remain a mystery.