The Strange UFO Crash of 1978 in Bolivia

On May 6, 1978, a typical Saturday afternoon around 4:15 p.m., a cylindrical or egg-shaped object was spotted in the sky just over Mount El Taire in Bolivia, South America. Witnesses described the object as descending at a fast rate of speed with flames roaring from its tail section. (1)

It was one of the most widely witnessed UFO crash sightings. Thousands of people saw the metallic object fall from the sky and crash into a nearby mountain.

The blast from the UFO crash was so powerful that it was heard 150 miles away. The ground trembled according to eyewitnesses and was felt nearly 30 miles away. Many claimed to have been thrown to the ground from the sonic blast of the impact.

Mount El Taire overlooks the border between Bolivia and Argentina. It is located along the Bermejo River that slices through the lower part of Bolivia and snakes through Argentina. The UFO crash on the mountain received massive media coverage in Bolivia, Argentina and Uruguay.

With so many people witnessing the crash and hearing the loud sonic bang that reverberated throughout the mountainsides, it’s no wonder the story gained such high media exposure. (1)

The local newspapers cited quite a few possible explanations for the phenomenon along with countless stories from eyewitnesses who saw the cylinder-shaped metallic object crash into the mountainside. Speculation was rampant with very little verifiable information other than what everyone had seen fall from the sky.

The town of Bermejo is reported to have been the closest town to the crash site. Located in the territorial dip where Bolivia and Argentina are divided, the townspeople didn’t question the Argentine government when it sent personnel into the area to conduct its own investigation. Argentine officials interviewed Bermejo citizens and combed their shared border for the wreckage.

UFO Evidence cited an account of Corporal Natalio Farfan Ruiz, the border police commandant of the village, La Marmora, Argentina as having publicly verified that there had been a UFO crash. The city of Tarija was the largest nearby township capable of accommodating reporters and investigators and became the hub for those investigating the story. (1)

In the book, UFO Cover-Up: What the Government Won’t Say, the authors discuss a UPI (United Press International) release that stated NASA was asked to investigate “physical evidence involving a UFO that had exploded in Bolivia”.

The story claimed that the message originated from the US Embassy in La Paz, Bolivia. However, a spokes person for NASA claimed that NASA was not involved in any investigation. The authors further discovered that it was the US Air Force that investigated and subsequently recovered the craft. (2)

The authors discuss how a National Enquirer’s UFO expert returned from investigating the Bolivian event and discussed how the witnesses described the object as making a series of turns before “it exploded and crashed”. He cited there was an air explosion followed by a second explosion with the craft collided into the mountainside. 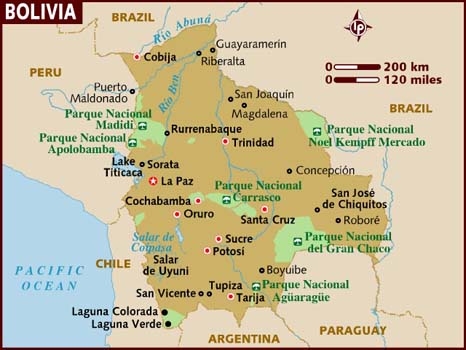 According to newspaper reports, the Bolivian Air force located the crash site on the southern slope of Mount el Taire. The Tarija Police Chief was quoted as saying:

“Our men have discovered the object and inspected it, but have received no instructions for further action. It is a dull metallic cylinder twelve feet long with a few dents. No one knows what is inside it, and we are awaiting the arrival of various technical commissions. A NASA expert is also expected to arrive tomorrow morning.” (1)

The report continues that the US Air Force arrived in Tarija and transported the object back to the US on a Hercules C-130 that took off from the La Paz airport. The US Embassy denied all inquires made about the US involvement and the removal of the object.

According to Educating Humanity, the telegram sent to the US Department of State from the La Paz American Embassy stated that there were newspaper reports of a UFO falling from the sky and it was recovered near the town of Bermejo. The object was “described as egg-shaped, metal and about four meters in diameter”. (3)

The website quotes a CIA document from May 15, 1978 that states:

“Many people in this part of the country claim they saw an object which resembled a soccer ball falling behind the mountains on the Argentine-Bolivian border, causing an explosion that shook the earth. This took place on May 6. Around that time some people in San Luis and Mendoza provinces reported seeing a flying saucer squadron flying in formation”. (3)

A May 16, 1978 CIA communication, available through the FOIA (Freedom of Information Act), states:

“Argentine sources indicated that the border with Bolivia had been closed but that it might soon be reopened. They also reported that an unidentified object had fallen on Bolivian soil near the Argentine border and that local Bolivian authorities had requested aid from the central government which, in turn, had sought assistance from the US National Aeronautics and Space Administration (NASA) to investigate the case.” (4)

Further CIA report updates stated that the object had been moved to Tarija. The last reports tend to be quite confusing since they basically disavow authenticity of the crash by stating the Bolivian Air Force flyovers of the supposed crash site revealed nothing.

Some UFO investigators suspect the report is an attempt at disinformation similar to the backpedaling of Roswell or perhaps simply the clean-up of the incident that marks the beginnings of a cover-up? (3)

With so many eyewitnesses, newspaper and radio reports as well as government documents about the sighting and UFO crash, it’s difficult to believe that both the Bolivian and Argentine governments would have devoted so much manpower to investigate a mere hoax.

It’s clear that something crashed on the side of Mount El Taire in 1978. What it was, where it came from and where it was taken once recovered remain the typical mysteries that plague such searches for evidence of crashed UFOs.