Billions of people around the world are taking advantage of a food source that is cheap, healthy and environmentally friendly. Are you missing out?

It can be a high source of protein; provides vitamins, minerals and fiber; requires little space to produce, and replenishes rapidly.

In addition, it is reported to have about 20 times higher food conversion efficiency than other meats. In other words, a better feed-to-meat ratio than beef, pork, lamb or chicken.

Great for survival situations or everyday dining. And it’s now being spotlighted in international circles.

Bugs? You want me to eat a bug?

Okay, maybe you’ve never eaten an insect. Or, have you?

The United States Food and Drug Administration’s Center for Food Safety and Applied Nutrition produces a publication called “The Food Defect Action Levels: Levels of natural or unavoidable defects in foods that present no health hazards for humans”. This volume details acceptable levels of food contamination including how many bugs you can have in your dinner.

The thought of eating sushi or even tofu used to disgust many people in the United States; now, however, sales of these food items are doing well. Why not the same for tasty termites and gastronomic grasshoppers?


Insect Foods in the Past and Present

Romans and Greeks chowed down on beetle larvae and locusts. John the Baptist lived in the desert for months by dining on locusts and honeycomb.

Ancient Algerians enjoyed a good lunch of locusts as well. Thousands of them were collected and prepared by boiling in salt water and drying in the sun.

In Sardinia, Italy, traditional casu marzu is made with sheep milk and insect larvae. Aquatic fly larvae sautéed in sugar and soy sauce, candied grasshoppers, and wasp crackers are consumed in Japan.

Australian Aboriginal meals have included moths (cooked in sand, head/wings/legs removed) as well as ants and grubs.
Ants show up regularly in some Latin American dishes. In Ghana, winged termites are cooked or made into bread. Beekeepers in China typically eat the larvae. A Balinese treat is dragonflies boiled in coconut milk with ginger and garlic. The list goes on. 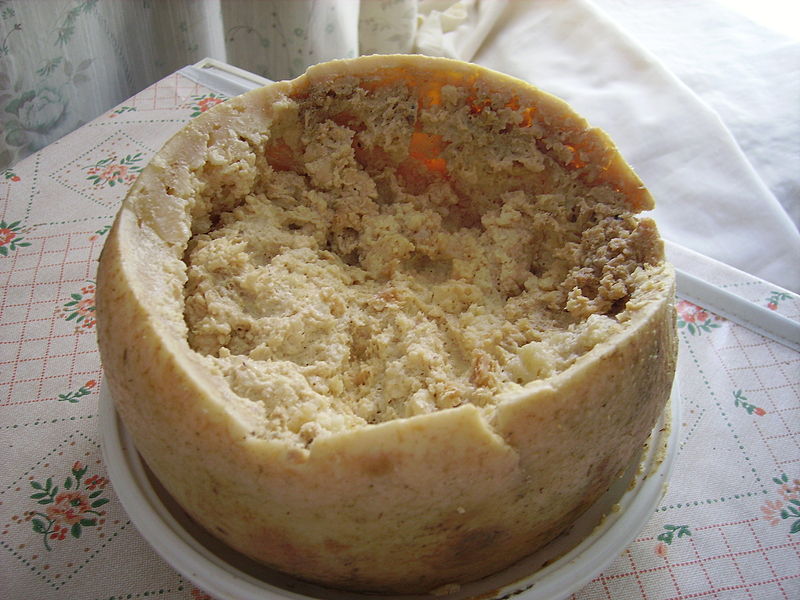 If you’re in a survival situation, you need to expend the least energy possible to obtain the most food. Sometimes, you can hunt or fish for a whole day without results (especially if you don’t know how to hunt or fish) but, with insects all around in many lands of the world, you have a great chance of eating meals that day by simply overturning a rock, looking in bamboo, etc.

If a cause is what you need, look no further than your dinner table.

The United Nations Food and Agriculture Commission completed a 200 page report this May providing what is claimed to be the first comprehensive assessment of insects’ current and potential uses food for humans and livestock.

Basically, it says that by 2050, the world will host 9 billion people, and there’s just not going to be enough food. So, the underutilized bugs all around us should be considered.

Insects convert their own food to body mass more efficiently than traditional livestock because insects are not warm-blooded. So, they don’t use up energy keeping themselves warm-it can go toward growing instead.

It’s possible to learn to raise your own insects for food, and it doesn’t require a pasture, chicken coop, or even yard.

Like any food source, precautions are advisable. Learn them from a class or someone who knows.

You run more risk if you grab up any insect than with ones you know or by taking them from the wild rather than “farmed” bugs that are purchased from a known store or, if you learn how, grown yourself.

Part of this is the fault of humans because you don’t know what bug might have eaten from plants doused in fungicides, etc. So, if you have the choice, get your insect delectables from a good source (again, good advice for any food).

There’s the issue of allergies. It’s best to consult your doctor if you have any food allergies. Otherwise, play it safe and avoid insects because, unless you know your tolerance, you don’t know what could happen.

If you’re in a survival situation and choosing insects without the help of a professional, avoid eating brightly colored, hairy or spiny bugs; chances are they’re poisonous. Insects with a very pungent odor are often to be avoided. Fleas and ticks that carry disease are off the list, too. Most caterpillars are inedible, and some folks say to avoid those that sting you (ouch!). There are exceptions to all of these rules, but following the rules will help you avoid health issues.

For religious or personal reasons, some people won’t touch such a thing. No problem.

I’m just saying, if you’re trying to survive, or live on a budget, or live more sustainably, it’s an option. And it doesn’t have to be a disgusting plate like is served up on reality TV to shock audiences. It can be presented well; something addressed in an upcoming article.

And, pass the sauce, please.