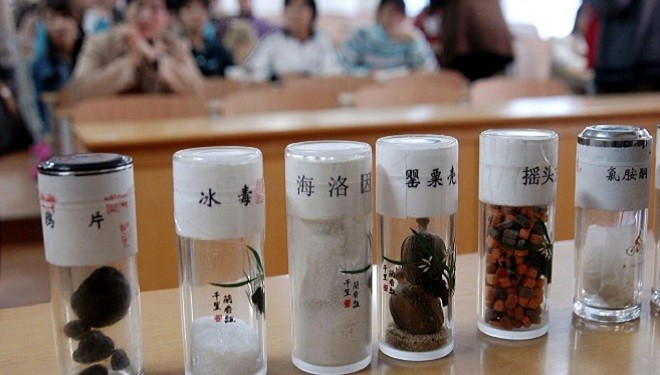 Designer drugs made in China are flooding foreign markets. Chinese chemists hide behind lax DEA regulations and ship “legal high” via FedEx and UPS to eager users from around the world.

By constantly changing the chemical structure of their product, (1) these scientists/pushers avoid detection and the long arm of the law. The result, however, is a recipe for a new breed of drugs which is readily available, hard to control and of dubious quality. Law enforcement officials in the US (2) and abroad (3) are scrambling to deal with the latest drug craze. (3)

“Designer synthetic drugs are often marketed as herbal incense, bath salts, jewelry cleaner or plant food. They are made up of plant material that has been infused with psychoactive compounds that mimic THC, the active ingredient of marijuana. Abuse of the drugs can lead to seizures, vomiting, loss of consciousness and overdose deaths, the DEA said in a statement. The number of emergency room visits associated with the drugs reached 28,531 in 2011, more than twice the number the year before,” the DEA said (2)

Sporting names like K2, Spice, Rush, Smiles and others, designer drugs from China have law enforcement officials scrambling for an answer. The problem is that such chemicals are close enough chemically to their real cousins to get you high, but not close enough to be banned-so far. What chemists have done is to create molecules which are nearly identical (1) to those found in drugs such as ecstasy, cocaine and many more.

These drugs have the benefit of flying under the legal radar and thus can be sold online. Due to their chemical nature, the drugs can get you off, but can legally be purchased. The result of this is that Chinese “druggists” have created a strong online presence selling legal highs which are marked as “not meant for human consumption” but sold as anything but.

The elephant in the room is the fact that the Chinese know why they are making and selling the drugs, and consumers obviously know why they are buying it. Fortunately for them, it is too hard for government officials to seize even a small portion of the illicit narcotics.

Aside from legal issues, there are health concerns (4) with using the drugs as well. For instance, due to the nature of Chinese manufacturing and worse yet, laws, quality control is non-existent. (1)

This means that what is sold as “synthetic Mollys” could be very well be anything from rat poison to drywall. In addition to this, there is no guarantee of how much of the chemical is in each hit; this leads to overdoses and death. Consumers, however, believe the good outweighs the bad as they can get a legal high.

What this means is that there is a perfect storm for substance abuse and the government is losing. Let’s be clear about this, we are not talking about some guys growing and selling weed in sheds outback. Chinese chemists are designing chemicals which mirror the “good” of a drug high, with no concern for drug efficacy or long term effects. It’s one thing to have an American dealer cutting coke with baby laxatives, but something else entirely when dealing with China.

Although we are clearly losing the war on drugs, at least there is some measure of accountability in dealing with domestic drug issues.

Some American guy sells super pure heroin and a young girl dies. Public outrage may demand justice and there is a chance the dealer is caught and prosecuted.

The same cannot be said for drugs sold by the Chinese. Due to extradition laws, a Chinese chemist could brew up “murder meth”, killing hundreds if not thousands, and there is nothing we can do about it. Even if the druggist was found, which is a long shot, he could keep on cooking.

In a desperate attempt to control the influx, governmental officials are going to ban the import of chemical chains which are closely related to narcotics. The reason for this is that as soon as a new drug is created and banned, another moves into its place. Due to the nature of drugs, it is possible to continually manipulate molecules ever so slightly, keeping them legal. By banning the import of the chain, the government can create a widespread ban on such chemicals. What can only be seen as a cruel twist of fate has the Chinese turning the tables on the West and “drugging nations”.

Visions of Chinese opium dens filled with lethargic mandarins sucking from swan necked pipes are an image that many have of China. This is born from first-hand accounts of the rampant addiction they faced in the mid to late 19th century.

According to governmental statistics, up to 90% of citizens from several Chinese provinces were addicted to opium. (5) What many fail to realize, however, is that opium use in China dates back to the 7th or 8th century. It was initially prescribed and used medicinally, but was then abused by the affluent as early as the 17th century. (5) At that time, however, opium use had not trickled down to the masses and was still the kingdom of the moneyed. The opium wars, however, changed all that.

One of the first things one notices upon arriving in China is how proud they are of their history. The country abounds with stories of emperors, their good and their bad. It is almost as if the people from China know who they are by understanding who they were.

One period they are not proud of, however, is the “century of humiliation” which was a period of drug addiction, unequal foreign treaties and invasion. (5)

At this time many factors lead to China’s technological decline and weakened borders. (6) The once proud Chinese and their emperors were forced to face the fact that they could no longer consider their civilization as one of the most advanced in the world.

What many Chinese blame this cultural degradation on was opium addiction and what it did to the people. (6) They make it clear that had they not suffered such humiliation, China of today would be a much different place. Most definitely they are not shy about voicing such matters. For example, just the other day while I visited a Chinese tourist trap, I heard a Chinese tour guide explaining what had happened to the center country-China.

The guide had stopped at a plaque proclaiming that the people should never forget the national humiliation. As part of his spiel, the tour guide went on about how the British forced the Chinese to buy and presumably smoke opium.

What Does It All Mean?

The opium war was the result of the English trying to ease their debt burden with China. Due to drug use ravaging the land, Emperor Dao Guang (5) precluded the English from selling opium into China. The English disregarded the diktat and continued selling and were eventually confronted by the emperor’s troops. One thing lead to another, the opium wars broke out and the rest is history.

The Chinese tour guide leading the group went on to say that forced addiction was nothing less than a plan geared toward stopping the rise of the Chinese dragon.

His speech was speckled with nationalist appeal which did not fail to focus on the involvement of the “foreign element”. Such a focus seems to have picked up since China crowned the new leader of the communist party and president- Xi Jinping.

Interestingly enough, in what the Chinese must see as poetic justice, it is they who now flood foreign shores with mind addling drugs. Time will tell if China will now return the favor and use narcotics to take down the economic leader of the day.