Project May Bell – Detecting the Enemy With Surface Wave Radar 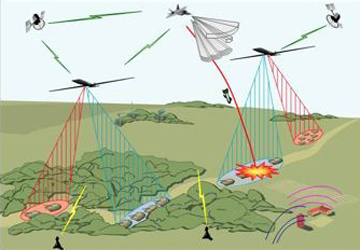 During five days in May 1970, DARPA and the U.S. Navy participated in a workshop to explore the idea of using bistatic and/or monostatic radar to detect and track aircraft, missiles, ships and even submarines at over-the-horizon distances.

The two agencies were exploring these ideas in an effort to create an ocean-focused surveillance and early warning system.

The workshop focus was on the feasibility of using a bistatic radar system to create the surveillance and early warning system and to determine if a bistatic system would be more successful than a monostatic system.

Just to give a brief overview of the two systems being discussed by DARPA and the Navy, the monostatic system is the radar system that most of us think of when we hear the term radar. In a monostatic system, the transmitter and the receiver are at the same location. They even share the same antenna.

In contrast, a bistatic system has its transmitter and receiver separated by a specific distance. This distance, obviously, keeps the transmitter and the receiver from sharing the same antenna.

The benefits of using a bistatic system, especially in terms of surveillance, are the ability to operate it in secret, to move the receiver covertly and quickly, and an enhanced radar cross section.

Unfortunately, the bistatic system does have its drawbacks, such as a complex initial setup, increased communication costs, and an overall reduction in coverage. However, the five-day workshop was designed to provide information on whether the advantages outweighed the disadvantages.

This was a promising method because by using the ionosphere, detecting beyond the horizon was easily feasible. The monostatic surface wave method bounces radio waves directly off of the targets. A similar example would be how bats hunt; emit a signal. The signal hits the target and bounces back. Though effective, this method is not conducive to over-the-horizon monitoring.

Direct Wave-Sky Wave via a buoy would transmit a signal from a buoy located in the ocean that would detect the target. The signal would then bounce off of the ionosphere and reach the onshore receiver.

What did DARPA and the Navy conclude? Initially, they stated more information and data would have to be gathered before either agency would settle on a technique.

However, initial findings lead the workshop participants to lean towards Sky Wave – Surface Wave method. According to a declassified report outlining Project May Bell:

“It is concluded that the hybrid skywave/surface-wave system suggested above and summarized in Figure 11 offers a practical solution to the Navy’s problem of OTH surveillance, and it is recommended that steps be taken toward implementation of such a system.” (1)

It seemed that Project May Bell solved one of the most difficult problems in a long-range ocean-targeted surveillance and early warning system, that of over-the-horizon monitoring.