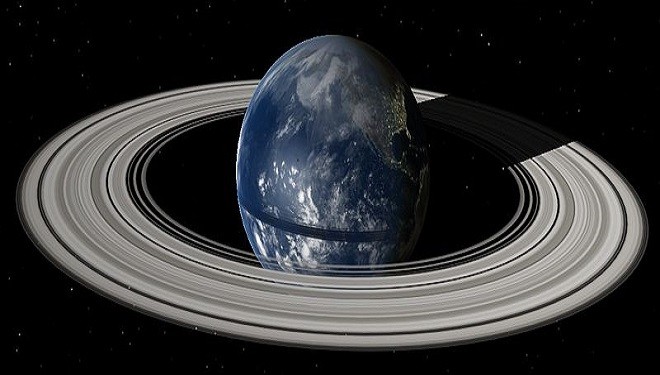 There is an actual Outer Space Treaty.

The events of May, 1963 included the Rolling Stones signing up with Decca Records, Mickey Mantle hitting a ball into Yankee Stadium’s façade, Bob Dylan’s song “Blowin’ in the Wind” was released, hundreds of African Americans arrested in the protest in Birmingham, Alabama and the James Bond film “Dr. No” debuted in the United States.

But, something else happened that month that many people might not know. May 9, 1963 is the date of the successful launch of an unusual payload.

Following an earlier launch attempt in 1961 that failed, this rocket flight carried the large batch of little needles to a medium earth orbit at an altitude between 3,500 miles and 3,800 miles above the Earth. Soon, a thin ring of metal encircled our world.

Ringing the Earth with millions of metal needles created something like an artificial ionosphere.

The Massachusetts Institute of Technology Lincoln Laboratory ran Project Westford (or West Ford) to solve a major weakness in communications.

At that time, the two options available for international communication were to bounce radio signals off the ionosphere or send messages through undersea cables.

This concerned the military minds charged with keeping things safe during the Cold War. Cables can be cut, and the natural ionosphere is an unreliable partner.

The antennas cooperatively provided passive support to Project Westford’s parabolic dish in Westford, Massachusetts so that it could communicate with distant positions.

In other words, they bounced a signal to where it needed to go. And it worked, but not for long. Communication satellite technology was hitting its stride in 1963, and the rest is history.

This Caused a Stir

Still, though the people in charge chose to go with satellites, the band of metal around the Earth remained. This generated opposition from a variety of sectors.

The needles were so far apart that the belt could not be seen by the naked eye, but they could have obscured microwave and radio frequencies: cutting out a lot of research about the cosmos. Plus, well, there was a band of metal around the Earth, and some people and nations didn’t like that.

Various experts assured detractors that sunlight pressure would make the dipoles stay in orbit for about three years, but the international protest, in the end, caused a provision to be included in a document born of concerns with the earthly use of space.

Five years after the successful launch of the Westford rocket, the United States, the United Kingdom and the Soviet Union signed a treaty on “Principles Governing the Activities of States in the Exploration and Use of Outer Space, including the Moon and Other Celestial Bodies”: the Outer Space Treaty.

Growing from concerns about how space was being used, including Westford, it is the document that is the basis for international space law. As of May, 2013, 102 countries have signed on. Others have signed it but not finalized ratification.
Included in the treaty are the agreements that:

–> States cannot place weapons of mass destruction in orbit around the Earth, on the Moon, on another celestial body, or stationed in outer space.

–> Use of the Moon is only for peaceful purposes and not weapons testing, military maneuvers, or military bases.

–> The exploration of outer space shall be done for the benefit of all countries and be free for exploration and use by all states.

–> No government can claim a celestial resource like the Moon.

–> The nation that launches a space object retains control over that object and is liable for damages from it.

And, as a direct result from the experience of the Westford Project, a consultation clause in Article IX was included:

And, What Happened to Those Antennas?

Most of the Westford dipoles appear to have re-entered Earth’s atmosphere within seven years, floating down slowly all over the Earth’s surface, unscathed by re-entry because of their size.

Apparently, there was some thought of recovering some of the dipoles for research. Calculations indicated that as many as five of these antennas per square kilometer landed in the high Arctic. But, even at that, trying to find those few, teeny needles in that vast area were too much for even the most intrepid researcher, and no recovery seems to have been undertaken.

Some of the antennas remain in orbit to this day.