The US Credibility Issue on Syria and Chemical Weapons 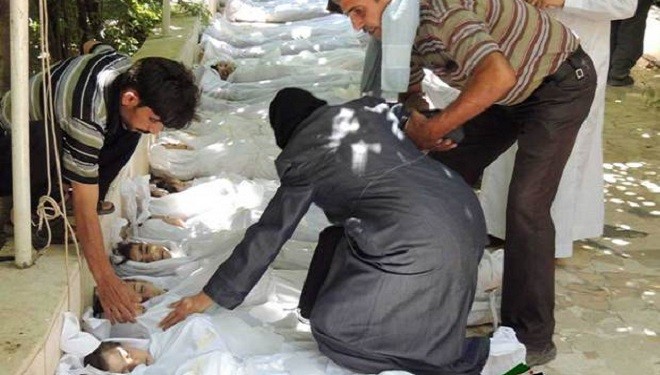 Last month, Moscow urged Washington not to repeat “past mistakes” in the Middle East. Russia was referring to the US’s response to dealing with the Syrian president’s alleged use of chemical weapons.

On August 21, 2013, more than 300 people died in the alleged chemical attack on the Syrian capital of Damascus.

Opposition activists quickly accused the Syrian government of dropping toxic agents onto civilian areas as a means of edging rebels further outside the capital. The Syrian government has, however, vigorously denied that it has ever used chemical weapons, describing the claims as “false and completely baseless”. (1)

The US government insists that it has the intelligence to prove that the attack on the rebel-held Damascus suburb involved chemical weapons and was carried out by President Bashar Assad’s government. Due to the alleged use of chemical weapons crossing the red line Barack Obama had drawn a year earlier, the White House called for military intervention in Syria.

There is plenty of evidence that Syria used chemical weapons in the attack. For example, according to doctors at the scene, a large number of patients displayed telltale signs of nerve agent poisoning, including excessive saliva and convulsions.

In a US intelligent assessment of the attack, the US Secretary of State John Kerry said they have satellite evidence that shows rockets were launched from government-held areas 90 minutes before the first chemical attack was reported. (1)

Despite the overwhelming evidence that shows the Syrian government did carry out this horrific attack on its own civilians, much of the world strongly opposes the West taking military action against Syria. Part of the reason for the strong opposition against taking action in Syria stems from the distrust people feel towards the US, distrust that surfaced in intelligence failures in the lead-up to the Iraq war.

As Top Secret Writers reported in February 2011, the main reason behind the US-led invasion of Iraq in 2003 was because of the belief among the CIA and intelligence agencies around the world that Saddam Hussein was in possession of powerful biological weapons.

Due to the fact that no WMDs were ever found, people began to doubt the in integrity of the CIA, which came under the spotlight for closer examination. The Iraq Inquiry was formed which led to the declassification of numerous documents.

As such weapons were never found, it seemed, as the CS Monitor put it, there has been a “remarkable CIA mea cupla”. Many remain naturally distrustful when it comes to the US’s stance on WMD and chemical weapons. (2)

Last week, the G20 summit in St. Petersburg began, which on its first day saw world leaders locked in a divisive debate over Syrian.

Earlier last week, the US president pushed for support for military strikes in Syria. Russia and China warned the US not to take action without backing from the UN.

According to the New Yorker, Putin believes Obama is “indecisive as well as conscience-stricken” about his choice on Syria and wants to slow the US president down. (3)

The evidence of Assad’s use of chemical weapons is vast and concrete. It is the US’s lack of credibility due to its “past mistakes” in the Middle East that Moscow was quick to point out that is the potent barrier in preventing Obama from beginning his campaign of military action in Syria.

As the New Yorker states, Obama may feel that he has little choice but to placate Putin, to keep providing “more proof” and to “politely ask for his acquiescence”.

The question of proof does however go well beyond Putin. The distrust many feel towards the US government’s stance on chemical weapons that stemmed from the intelligence failures of the Iraq war is undoubtedly hindering support of military intervention in Syria.

“One of the main problems with proposed American military action in Syria is Washington’s inability thus far to control its message internationally,” writes the New Yorker. (3) “There are a good number of people in the world who still believe that Syria is telling the truth with its denials of using chemical weapons, and that the United States is simply lying about what it knows.” (3)

With medical experts all but confirming the symptoms of the victims of the August 2013 attack on Damascus was caused by chemical weapons and so-called satellite evidence that chemical weapons had been launched, the Obama administration is using evidential intelligence to justify military strikes on Syria.

Opposition to military attacks is also overwhelming. Past mistakes made by the United States involving weapons of mass destruction and the Iraq war have certainly contributed to the opposition felt by many about carrying out military strikes in Syria.

Syria’s ally Russia is quick to point out these “past mistakes”, making it more difficult for the US to make a valid case – even if there is plenty of proof.