Israel Captures Iranian Spy with Photos of US Embassy

Israel has disclosed the arrest of an Iranian-Belgian citizen who is accused of spying for Iran. Ali Mansouri was arrested on September 11, 2013 at an airport in Tel Aviv, the second largest city in Israel.

In a statement following the arrest, Shin Bet, one of three principle organizations of the Israeli Intelligence community, said that Mansouri had photographed the US embassy in Tel Aviv. Shin Bet is claiming that Mansouri intended to establish business relations in Israel as a front for espionage.

The Israeli intelligence agency said that Mansouri was born in Iran but legally changed his name to Alex Mans in Belgium. Shin Bet continued that Mansouri used his Belgium passport to gain access into Israel where he was recruited as a spy by Iran’s Revolutionary Guards. The organization makes further claims that Mansouri had visited Israel twice before his arrest.

In its statement made about the arrest, Reuters reports the Shin Bet revealed a photograph that was apparently in Mansouri’s possession when he was arrested. The photograph was taken of the US embassy in Tel Aviv from a high-rise balcony not far from the embassy. The statement said that the Iranian-Belgium had planned to set up business ties with Israel in the guise of a roofing and windows salesman as an attempt to cover up his real motives – gathering intelligence and “terrorist activities”. (1)


Paid to Harm Israel and US

The 55 year old is currently being held under a court order awaiting an official hearing. It is reported that under questioning Mansouri acknowledged that he had been promised $1 million to “harm Israeli and Western interests”. (3)

News about the arrest came just hours before the Israeli Prime Minister left for New York to talk to President Obama about Iran. As he boarded the plane at Tel Aviv airport, Benjamin Netanyahu told Israeli public radio:

“I intend to tell the truth in the face for the sweet talk and charm offensive of Iran. Telling the truth at this time is essential for world peace and security and, of course, for Israel’s security.” (2)

The Al Jazeera news outlet describes Netanyahu as being “dismissive” in his response to the push by Iran’s new president, Hassan Rouhani, to “mend fences with the international community”. (3)

Iran and Israel have of course long been pungent adversaries. Israel, which is widely believed to be the only nuclear power in the Middle East, claims Iran is secretly seeking to develop atomic weapons. Iran claims it is enriching uranium merely for peaceful purposes. As the Jewish Virtual Library states, few people truly believe that Iran is developing its covert nuclear program for peaceful purposes.

“Its military has developed the means to strike Israel with conventional weapons and intelligence assessments agree that the regime could reach the point where it can build and arm nuclear weapons by the end of 2013,” states the Jewish Virtual Library. (4) 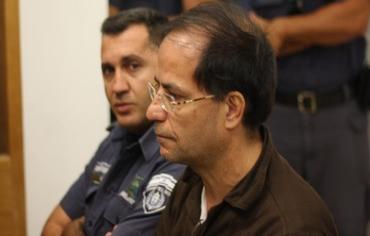 As well as being one of Israel’s foremost adversaries, Iran is also a long-standing enemy of the United States. The timing of the announcement of the arrest of the alleged Iranian spy, just minutes before the Iranian prime minister was about to board a plane bound for the US, cannot be ignored.

Concern has surfaced that Israel has grown alarmed about the recent pacifying moves between the US and Iran and that Iran is attempting to reach out to the West as a tactical move to relieve international sanctions and buy time. An Iranian state TV outlet called the arrest an “anti-Iranian propaganda by Israel before Netanyahu’s meeting with Obama.” (5)

Much has been made of the photographs that Mansouri had in his possession when he was arrested. What has been described as being “amateurish” photos included a rooftop view of the embassy, the baggage claim hall at the airport and one of Mansouri posing at the seaside at Tel Aviv clutching a map.

On the surface, by revealing such images in its statement, the Shin Bet is augmenting its “proof” that Mansouri is an Iranian spy. There has, however, been a fair amount of uncertainty of the surmise that taking pictures of a US embassy immediately means someone is a spy.

As one reader posts in response to the Al Jazeera report on Mansouri’s arrest:

“I have taken many hundreds of pictures of buildings and historical places; does it mean I am being a spy? Taking pictures is a hobby and anyone should do it. If he has not been involved in any crimes he is a free human. Taking pictures and doing business is against western interest? Never heard of that.” (3)

The only real aspect of the story that contradicts the remark that Mansouri is simply a visitor of Israel attempting to conduct business and taking photos of buildings of interest is the fact that under Shin Bet questioning Mansouri acknowledged that he had been promised $1 million to “harm Israeli and Western interests” – At least this is what Shin Bet claims.

Just last month, Iran’s Revolutionary Guards warned President Hasan Rouhani that he should have refused to take the historic telephone call from President Obama – the first contact between leaders of the two countries since 1979. The Shin Bet claims that the Iranian-Belgium was aiming to establish a front behind which the Revolutionary Guards could operate in Israel, against Israel. The next stage would have been to send terrorists to Israel to carry out attacks, said a Times of Israel report. (6)

As no formal charges have yet been made against Ali Mansouri, the Iranian-Belgium’s objectives remain speculation. One thing is more concrete, however – the Israeli arrest of a so-called Iranian spy clutching photos of the US embassy certainly stirred up attention, debate and conflict ahead of Netanyahu’s meeting with Obama.