Is the Mark McCandlish Alien Reproduction Vehicle Nothing More Than Project 1794? 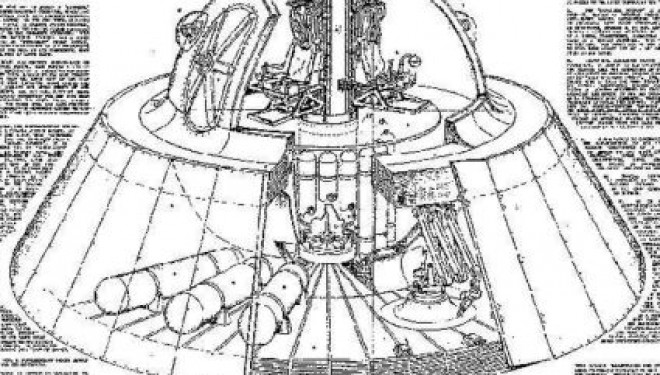 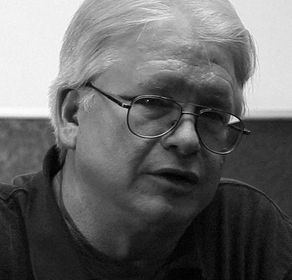 If you’ve never heard of Mark McCandlish, he is a self-described “aerospace illustrator” who claims that he has worked for “many of the top aerospace corporations of the United States”. As the story goes, one of his former art school friends named Brad Sorenson told Mark about attending an air show at a Lockheed Skunk Works facility in California and seeing an actual anti-gravity craft levitating above the ground.

From that single witness account, McCandlish proceeded to spend a good portion of the rest of his life digging into the claim. Inspired by his art background, he developed an illustration of the “alien reproduction vehicle” based on descriptions from Sorenson and from other witnesses to the craft.

The story that Brad Sorenson tells about floating craft, and the illustration that Mark drew afterwards and distributed all throughout the UFO circuits throughout the 1990s and beyond, made for some great stories about covert government flying saucers and antigravity technologies. However, in 2012, the National Archives released declassified records from the Aeronautical Systems Division of the US Air Force revealing that the Air Force was in fact actively developing disk-shaped craft in 1956, under a top secret project named Project 1794.

The craft was meant to become a vertical take-off and landing (VTOL) craft, and was to achieve a ceiling of 100,000 feet, and reach speeds up to Mach 4. What is truly astonishing are the similarities between the diagrams included in the declassified documents, and the drawings created by McCandlish – suggesting that Brad Sorenson might have seen the craft that he detailed at the air show, but that both he and Mark completely misunderstood the origin of the craft, and the type of technology involved in its operation.

Neither Brad nor Mark had a technical background. Both might have been accomplished illustrators, but engineers or rocket scientists they were not. Therefore, it seems plausible that both men – faced with an unusual craft like the one Brad witnessed – could have drawn such far-fetched and incorrect conclusions about the vehicle.

According to the story that Mark McCandlish provided for the 2011 Disclosure Project Press Conference, Brad Sorensen had gone to an air show at Norton Air Force Base on November 12, 1988. According to Brad, during this air show, he and other VIPs were provided with exclusive access to a special hangar with areas blocked off by big black curtains. Allegedly, Brad saw the Lockheed Pulsar (Aurora), and finally “three flying saucers floating; hovering above the floor”.

Brad told Mark that he was shown a videotape that showed the smallest 24-foot craft “making three little quick, hopping motions” before accelerating straight up into the sky and out of view. (1)

A Technical Description of the “Alien Reproduction Vehicles”

The technical descriptions provided by Mark and Brad were pretty detailed, with Mark’s illustration showing as much of those details as possible. Apparently, the craft had no external moving parts and supposedly no exhaust gases. Brad told Mark that he could see “big oxygen tanks” 16 to 18 inches wide and 6 feet long, “radially-oriented, like the spokes of a wheel.”

Interestingly, he also mentioned something that most closely resembles the craft that would, in 2012, become declassified and revealed as Project 1794 – the “dome” visible on the top that made up the crew compartment in the middle of the vehicle. Brad described a casting in the center of the vehicle with “a big set of copper coils in it”. 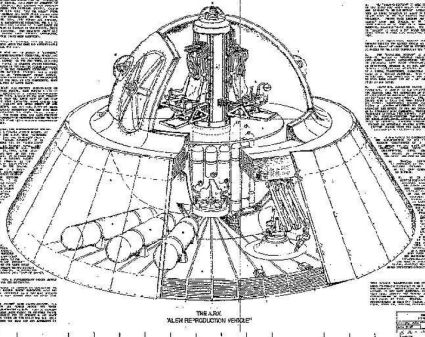 …the coil and this large disc at the bottom were like a big plastic casting — sort of a greenish-blue, clear plastic, or it might have been glass. I determined, using my conceptual artist skills, that there were exactly 48 sections like thin slices of pizza pie, and each section within this casting probably weighed four or five tons, judging by the thickness and the diameter. It must have been monstrous in weight. It was full of half-inch-thick copper plates, and each of the 48 sections had 8 copper plates.

Mark – the illustrator, not a physicist mind you – deduced from these sparse observations that the “copper plates” must have been part of “plate capacitors” that the scientists were using to create an anti-gravity effect using the “Biefield-Brown effect”. This is a well-known artifact of levitation of particles between the plates of a capacitor – an artifact often referenced by pseudo-scientists trying to convince people of the possibility of antigravity.

Brad, Mark and many of their colleagues and friends went on to speculate that the craft observed by Brad was some kind of reverse-engineered alien vehicle (hence the nick name “Alien Reproduction Vehicle”). The reality was that the Air Force really did have such craft in its possession, and its origin was not alien – but instead was the invention and creation of the folks at Canadian aerospace company Avro Aircraft Limited in Ontario.

The 1956 “Final Development Summary” provided by Avro Aircraft and revealed in the declassified documents state exactly what the propulsion system was (hint – it wasn’t a Biefield-Brown antigravity engine). The document explained that the craft would use “propulsive jets” to control the craft, but also stated that additional tests would be required, and that the 18-24 month project would cost just over $3 million dollars (the equivalent of a little over $30 million today). (2)

Observing the diagram shows just how astonishingly close the declassified craft described in the Project 1794 documents match many of the details described by Brad and drawn by Mark. 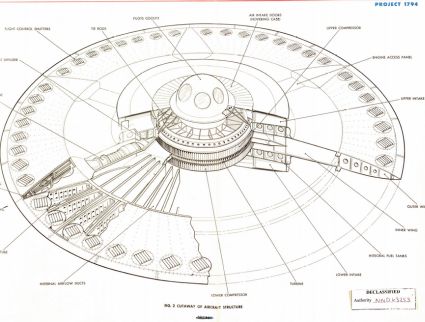 Matching details included the dome-shaped pilot’s cockpit resting atop the center column of the craft, the central compressor below the pilot cockpit could easily explain the “heavy copper plates” detailed by Brad. It would also appear that Brad misinterpreted the jet turbines laid out like the “spokes of a wheel” as “oxygen tanks”. They were the propulsion system that directed air down the airflow ducts and out of the “flight control shutters” – likely nearly flush with the under-body of the craft and unnoticeable to Brad as he went through the tour of this unusual craft.

Another fascinating “match” are the rods shown bracing the base of the pilot cockpit in Mark’s ARV drawing, compared to the beams labeled simply “The Rods” in the Project 1794 drawing. Nearly a perfect match.

Whether Brad was shown this 1956 model of the craft, or some later generation of it, is uncertain – but the glaring commonalities between his observations and this now-declassified project make it fairly clear that the craft was one and the same.

The real question is whether the “high-ranking official” who decided to show these VIP’s the still-SECRET aircraft during the air show ever suspected that Brad’s observations that day would eventually transform into an elaborate conspiracy theory, complete with speculation involving anti-gravity propulsion systems and “Tesla coils”?

Or maybe that was the intent of the Air Force official all along? Either way – mission accomplished.

The ARV is unfortunately a Ufology meme that may probably never die – but at the very least, the declassification of this project can bring sane observers back to their senses.

The next question is – where did they conduct those tests, and what sort of supersonic, VTOL crafts are they developing today? Unfortunately, we may have to wait another 60 years to find out.