The Nazi Gold – The Tale of Merker’s Mine 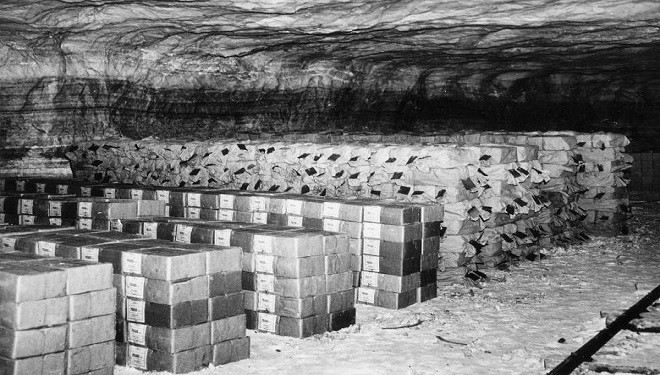 There is nothing quite like a story about hidden treasure to bring out the pirate spirit in all of us. Unlike the tale of “buccaneers and buried gold” in Treasure Island and the curse of the Aztec Gold in the Pirates of the Caribbean, the tale of the Merkers Mine is true. In fact, the discovery of the Merkers Mine in 1945 remains one of the greatest treasure stories of all time.

On April 8, 1945, General George Patton’s Third Army received intelligence reports that a loot of treasure was held in salt caverns, approximately 200 miles to the southwest of Berlin. After detonating the entrance to the cavern, the army found shocking remnants of six years of Nazi dictatorship and war.

Piled high against the cavern’s walls were thousands of bars of gold, boxes of gold bullion, bales upon bales of foreign currency and numerous art masterpieces, as well as the majority of the reserve from the German Central Bank.

The Merkers Mine loot even included Edouard Manet’s famous Wintergarden painting. As PBS states, most of the treasure had been pillaged from the banks of European countries and museums during Nazi rule.

Amidst the glimmering jewels, shiny gold bars and artistry at its finest, grim reminders of sickening Nazi dictatorship stuck through the treasure, including the wedding rings and dental fillings from death camp inmates.

This video available to view on Critical Past shows footage of the 100 tonnes of gold bullion, jewels, paintings and silver being recovered from the mine in 1945. Bags full of money from European currencies and more than two million dollars of American currency were found in boxes.

The Merkers Mine was situated in an area that was controlled by the Soviets. After receiving intelligence about the treasure, the American army quickly moved in to retrieve the lost treasure before the Soviets arrived.

As TSW wrote in 2012, one lesser-known characteristic of Hitler is that he was a failed artist. During his 26 years of power in Germany, Hitler and the Nazis looted art and treasure from around Europe and the world, stashing it into the Merkers Salt Mine.

According to the National Archives, 20% of all art in Europe was looted by the Nazis.

When the war was over, much of the gold the US Army recovered was shared among the Tripartite Gold Commission in Britain, France and America. The three American soldiers who found the Nazi loot were commemorated for their efforts. They were given the nickname the “Monuments Men”. The Monuments Men developed into a group of museum directors, art historians and curators.

Despite the group’s efforts to recover and return all of the art, much of the Nazi’s stolen treasure remains missing. In 1997, Phil Saunders, editor of Trace – the stolen art register – said there are “at least 100,000 world of art still missing from Nazi occupation”.

So prolific and respected were the Monument Men’s findings that this year a movie is being released which is based on the inspiring, real-life treasure story.

The Monuments Men is a 2014 American-German war film. The movie was written and directed by George Clooney, who also plays a leading role in the film. The all-star cast includes Matt Damon, Bill Murray, John Goodman, Cate Blanchett, amongst others.

The story is based on Robert M. Edsel’s non-fiction book The Monuments Men: Allied Heroes, Nazi Thieves and the Greatest Treasure Hunt in History. The movie closely follows the movements of the Monuments Men in 1945, when they were tasked with locating and saving some of the world’s most culturally important art and treasure.

The film was released in the US on February 7, 2014, February 14 in the UK and February 20 in Germany. The movie has not generated the best of reviews. As The Guardian writes, George Clooney’s drama about a team of Americans at war with Nazi art thieves “fails to strike the right tone”.

“[The film] wobbles uneasily between twinkly smiles and schmaltzy frowns, struggling to decide just how seriously to take its subject matter.”

Echoing The Guardian’s disdain, The Independent refers to The Monuments Men as a “profoundly frustrating and unsatisfying film”.

Unlike Clooney’s film, the real-life achievements of the soldiers that were sent to rescue Europe’s most important works of art after World War II, were impressive.

Some of the world’s most important paintings would not be enjoyed by the world today if it wasn’t for the Monuments Men. Perhaps that is the problem with the Hollywood depiction of such an inspiring and consequential true story – Clooney’s cast fails to get to the art of the matter.

Has anyone seen The Monuments Men yet? If so, we’d love to know your views on the movie that, so far, has generated a lot of negative press.