What is the Mysterious Green Slime Following Meteor or UFO Sightings? 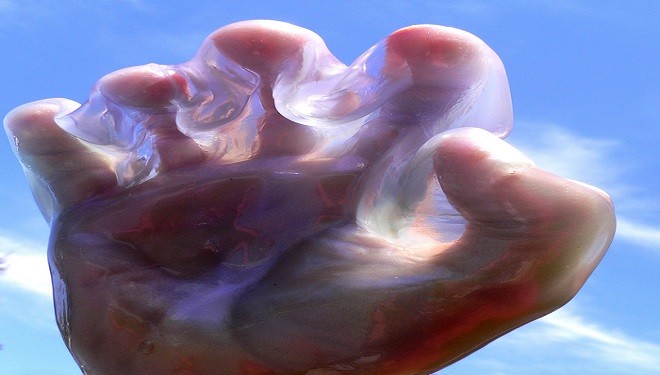 At the beginning of the year, Top Secret Writers wrote a report about the strange lights that appear just before an earthquake. The mysterious bright glow in the sky was related to, by many witnesses, UFOs. Now, another strange physical occurrence has been associated with UFO and meteor sightings – green slime.

February 2013 was a significant month in terms of meteor mayhem. Just a day after a huge meteor streaked through the sky and exploded over the Ural Mountains in Russia, unusual slime was found in a nature reserve in the county of Somerset, UK. Many believed the “space slime” came from a UFO.

On February 16, 2013 a mysterious object was captured on camera flying over the Avalon Marshes in Somerset. Annie Henderson, a wildlife photographer and local resident, had taken the pictures at the bird sanctuary at the marshes. Dissimilar to distant air crafts, passing satellites and weather balloons, the distant light in the photo appears to be burning up with flaming gases shooting off it.

“It was only the next morning that I uploaded the pictures on my computer and saw what was on the pictures when I zoomed in,” Ms. Henderson told a local newspaper. “I’ve never seen anything like it before, and I’ve lived on the levels for 17 years.”

The photo naturally created quite a stir, with some deeming it a piece of space rock similar to the meteorite that hit Chelyabinsk just the day before.

Speculation about the strange sighting intensified when the green slime was found not far from where the mysterious light was seen. Experts in the area began examining the translucent goo, which is said to resemble “something living”.

“Star jelly” is the name given to a gelatinous substance, which is sometimes found in branches of trees or grass. The jelly-like substance usually evaporates shortly after it has “fallen”. Explanations behind star jelly have ranged from the substance being created by frogs, toads and even worms, to more paranormal theories that the slime derives from UFOs.

According to local Somerset folklore, the goo-like material appears in the aftermath of meteor showers. The folklore dates back to the 14th century, when the strange slime apparently always appeared after meteor showers. Locals at the time named the slime star jelly.

In the case of the Somerset slime, Britain’s Royal Society for the Protection of Birds (RSPB) provided a scientific explanation that the slime was likely unfertilized frog spawn. Tony Whitehead, a RSPC spokesman told The Daily Mail:

“At this time of year amphibians are spawning. The spawn is held in a substance known as glycoprotein which is stored in the female’s body.”

“While this is our favoured explanation for this appearance of slime, it’s also worth remembering that other things can give a similar appearance,” Tony Whitehead continued.

It is, however, also worth noting that this is not the first time the strange slime has been witnessed in the wake of a UFO or meteorite sighting. 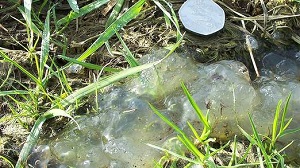 According to the Scientific American, in November 1846, a bright object fell at Lowville, New York. The object left in its wake a mound of foul-smelling luminous jelly which disappeared almost as quickly as it arrived.

In 1950, four policemen in Philadelphia reported seeing what they described as a “domed disco of quivering jelly”. The wobbling jelly mass is said to have been six feet in diameter and one foot thick in the center.

The Philadelphia policemen’s quivering jelly was mentioned in Frank Edwards’ book Strange World. The book traces true events that prove we live in circumstances frequently beyond rational understanding or scientific explanation. According to Edwards’ book, when the policemen tried to pick up the jelly it dissolved into “odorless, sticky scum”.

Interestingly, so captivating was the reported incident that it inspired the 1958 American horror/science-fiction film, The Blob. What was Steve McQueen’s début leading role depicted a growing amoeba-like alien that came from outer space and terrorized a small community in Pennsylvania.

These two space slime encounters are just two of a long line of other incidents involving people seeing similar jelly-like substances in the wake of a meteor or UFO sighting. For example, in 1994, Washington was home to several episodes of “gelatinous rain”.

So intriguing was the phenomenon that it was featured in an episode of Unsolved Mysteries in 1995. In October 2011, star jelly was found on hills in Scotland and of course, more latterly, the Somerset blob-like deposits.

It certainly is a fascinating occurrence. Green slime that seems to mysteriously appear and enigmatically disappear following a meteor shower or after a strange unidentified object has streaked across the sky. It is hardly surprising that authors, film directors and actors have capitalized on the cryptic phenomenon by centering movies around the subject or featuring it in books.

However, despite Frank Edwards’ Strange World book implicating the “domed disc of quivering jelly” the policemen found in Philadelphia as “beyond rational understanding”, there is a possible scientific explanation behind the mystery green slime – amphibians spawning.