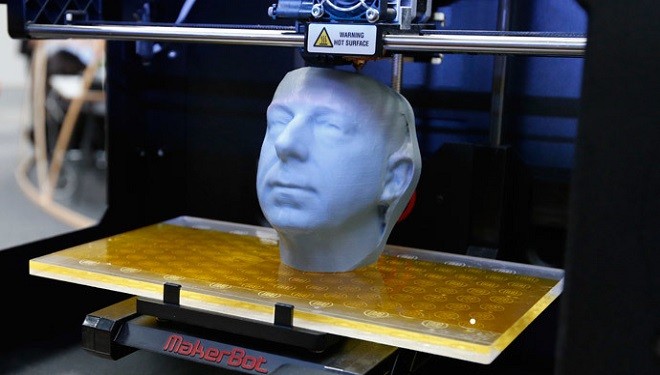 The medical industry is one sector that has seen a lot of 3D printing activity. The most recent news of the almost miraculous achievements from a three-dimensional printed model occurred in Britain this month.

A British man who had suffered horrific injuries to his face in a motorcycle accident underwent pioneering surgery. The surgery involved using 3D printed parts to rebuild his face. 3D printing has been used in surgery before, but this is the first time the three-dimensional process was used at every stage of the operation.

In 2012, Stephen Power from Cardiff was involved in an awful motorbike accident. The 29-year-old man’s skull was fractured, his nose, top jaw and both cheek bones were shattered, despite wearing a helmet. British surgeons determined the best way to reassemble his shattered face was by using CT scans and 3D printing. By using these techniques, the surgeons said much of the guesswork was eradicated from the reconstruction of the face.

The medical team at the hospital in Wales used CT scans to create and print a symmetrical 3D model of Stephen Power’s skull. Once they had the 3D model, the surgeons printed plates to match. The patient’s cheekbones had to be re-broken with cutting guides before the remodeling of the face was completed. A 3D titanium implant was printed in Belgium and was used to hold the cheekbones in position.

The reconstructed face is said to be remarkably similar to Stephen Power’s face before the accident. Prior to the surgery, Mr. Power would wear glasses and a hat to disguise his disfigurements. Immediately after the operation, the British man said he felt instantly transformed. The results were “totally life-changing”, Stephen Power told reporters.

“I could see the difference straight away the day I woke up,” continued the motorbike crash victim. “I’m hoping I won’t have to disguise myself, won’t have to hide away. I’ll be able to do day-to-day things, go and see people, walk in the street, even go to any public areas.”

Prosthetic limbs and even internal organs may have already been created by 3D printers. Mr. Power is, however, believed to be the first trauma patient in the world to receive 3D printed pieces to repair a fractured skull. Talking about the success of the surgery, Adrian Sugar, a surgeon at Morriston Hospital where the operation took place, told the BBC that the results are in a new “league”. He continued that the technology allows his team to be precise, because guesswork during reconstruction simply isn’t “good enough”.

The groundbreaking operation took eight hours to complete. The project was pioneered by the Centre for Applied Reconstructive Technologies in Surgery, a joint collaboration between scientists at Cardiff Metropolitan University and the team in Swansea.

The Possibilities Are Endless

Sean Peel, a 3D design engineer spoke of how the face rebuild should encourage greater use of 3D printing in the UK’s National Health Service (NHS).

“It tends to be used for individual really complicated cases as it stands, in a quite convoluted, long-winded design process,” Mr. Peel said to the BBC. “The next victory will be to get this process and technique used more widely as the costs fall as the design tools improve.”

It’s not only Britain using 3D printing technology in surgery to achieve groundbreaking results. Earlier this year, the University of Michigan used 3D printing to perform life-saving surgery. In January 2014, 18-month-old Garrett underwent a procedure that was only the second of its kind. The operation was made possible by advancements in 3D printing technology.

Garrett Peterson suffers from tetralogy of Fallot, a rare disorder which means the baby does not have a pulmonary valve. Due to pressure put on his airways, Garrett developed severe tracheobronchomalacia, the softening of the bronchi which caused breathing difficulties.

In 2012, doctors from the University of Michigan worked with engineers to print a 3D biodegradable splint to implant in the airway of patient Kaiba Gionfriddo. This was the first time a 3D printed splint had been implanted in a human.

Garrett’s operation was similar, although more extensive, as it required the splinting of both bronchi. Since the operation, Garrett’s airways have remained open and his ventilator levels have decreased by 75 percent.

Performing life-saving surgery to aid someone to live a normal life by rebuilding their face, it seems 3D printing is just at the surface of pioneering the world of medicine. Being in relevant infancy, it also begs the question: How will 3D medical devices and procedures be regulated?