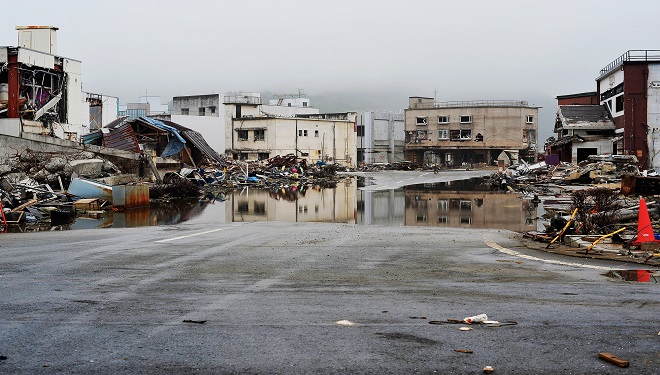 In a country known for its traditions and beliefs in spirits or ghosts, the Japanese are known for their reverence of ancestors and the need to pacify restless spirits. Some believe the rash of ghost stories and tales of spirit possession are directly related to the tragic events of the March 11, 2011 tsunami that followed the earthquake that struck Natori, Miyagi prefecture.

The calamity and horror that ravaged the Japanese coastline officially claimed 20,000 lives. Some of the victims were swept out to sea along with their houses. The sheer terror of the powerful waves that struck the northern coastline is what nightmares are made of. It’s not surprising that many people along these areas believe that their dead relatives are not at peace.

Over 3,000 people remain missing. Another 500 bodies remain unidentified, although now cremated and in storage until a family member comes to claim the remains. Even when some bodies are identified, there’s no one left in their family to claim their remains.

“Buddhists believe that these souls are trapped, still bound to the physical world and unable to begin the journey to Paradise. They remain in this state until their bodies are discovered, their bones are cremated, and the ashes laid to rest in an urn in the family grave, which is the gateway into the spirit world.”

The reports from those who believe there are ghosts are of angry spirits, woeful spirits and some spirits in search of relatives also lost in the waves that engulfed entire towns and villages.


Ghosts of the Tsunami

In his essay, “Ghosts of the Tsunami“, Richard Lloyd Parry recounts the many ghost stories related to him.

For example, he tells about an article in a “learned journal” written by a Buddhist monk discussing “the ghost problem”. And how “academics at Tohoku University began to catalogue the stories”.

There are stories of a cab driver hired to take a man to an address that no longer existed, but when he looked in the rear view mirror the man had disappeared. Another cab driver refuses to enter the Tsunami area for fear he’ll encounter a spirit or worse, a spirit will possess his fare.

One of his most compelling tales is about a Tagajo fire station that “received calls to places where all the houses had been destroyed by the tsunami”. When the fire crews answered the calls to the ruins and prayed for the deceased, they reported that the calls stopped.

There are endless tales of ghostly visitations, possessions and sightings. The spirits aren’t appearing to just Buddhists. In addition to Buddhist priests being busy responding to requests for exorcisms, Christian and Shinto priests are also in great demand. The number of reports of ghostly sightings is on the rise and not something that these priests can ignore.

One couple told Parry how the husband was possessed by a spirit after he’d walked along the shore of one of the areas devastated by the tsunami. In retrospect, he realized that he’d behaved irreverently by eating an ice cream cone. The monk admonished him after a successful exorcism for not giving the dead their due respect. In the story, the man assumed responsibility for having been possessed as a result of his indifference to the suffering that had happened at the site he’d visited.

Why So Many Stories?

These and other stories are pouring out of townships and villages hit by the tsunami. Many of the people suffer from survivor’s guilt and almost everyone lost a family member or someone close to them.

Whether or not survivors are actually seeing ghosts is a mote point. The point is that even after three years, those who survived the tsunami are still suffering. Their pain cannot be taken away like the tide moving out from shore. Some will never find their loved ones so they can be put to final rest. Humans must find a way to survive such emotional turmoil and for some in Japan, believing those lost are still walking among them may bring some small measure of comfort.